For nearly ninety years, Frank Pakenham’s 1935 account of the Anglo-Irish Treaty talks in London (Peace by Ordeal) has dominated the narrative of what happened in 1921 and subsequently. It is challenged robustly and at length here by Prof. Colum Kenny, a recent biographer of Arthur Griffith, with particular reference to the proposal for a boundary commission to delimit Northern Ireland.

On this the centenary of Griffith’s death on 12 August 1922, Kenny’s substantial article greatly elaborates his argument as found more briefly in a broad context in his recent book Midnight in London: The Anglo-Irish Treaty Crisis 1921 (Eastwood, 2021). Here now, full academic referencing and new sources are added, and the specific matter is teased out in detail as a useful resource for historians.

Kenny argues that the damning of Griffith helped to frame the Treaty as a disappointment instead of depicting it as the best that could be achieved on the back of a stalled and weakening War of Independence. This framing gave retrospective cover to those who had defied the majority of TDs and citizens who were in favour of working the Treaty.

The damning of Griffith helped to frame the Treaty as a disappointment instead of depicting it as the best that could be achieved on the back of a stalled and weakening War of Independence.

The interpretation of events in London on the weekend of 12–13 November 1921 is central to an understanding of the negotiations that resulted the following month in an agreement for a treaty leading to the foundation of the Irish Free State. This article examines the draft proposal for a boundary commission. It considers a crucial memorandum that then contained that proposal, a copy of which Prime Minister Lloyd George dramatically flourished during the final negotiations on the night of 5–6 December – in what Erskine Childers called ‘a strange episode’. Lloyd George reportedly claimed that Arthur Griffith had agreed to its contents.

The article rejects Frank Pakenham’s influential version of events which relied for its authority on a much later conversation with the former Tory leader and British Treaty negotiator Austen Chamberlain. In a recent ‘Platform’ piece for History Ireland in July/August 2022 (‘Redeeming Dev, Damning Griffith: Pakenham’s Peace by Ordeal’), Kenny has profiled Pakenham – who was close to Chamberlain, Birkenhead and de Valera – and advises caution in relying on the future Lord Longford.

The present article refutes suggestions that Arthur Griffith signed or agreed unconditionally to the Boundary Commission proposal when it was shown to him in November, and that he thus weakened the Irish negotiating position. It posits a more sanguine interpretation of what occurred, paying close attention to the detail of contemporary sources.

This article was earlier submitted to a leading Irish history journal for publication. Its Reader Report found the article “interesting, persuasive and well-researched” but it was rejected for publication because the key argument was said to have been “strongly stated” and already “out there” in Midnight in London. 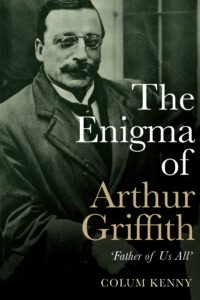 The author wishes to assure readers of the IRISH STORY website that his research on this subject has been continuing since that book went to print, including by way of further original archival research in Ireland and Britain. The entire footnote apparatus alone is new and is crucial to the authority of the argument, and is not found in Midnight in London because that book was intended for a more general readership. The author is grateful to John Dorney, chief editor of the IRISH STORY for providing a vehicle for this referenced elaboration of a challenge to historians to reinterpret critically the historiography of the Treaty and Civil War.

The full article is here.

Dr Colum Kenny BCL, BL, is a professor emeritus of Dublin City University. A former chair of the DCU Masters in Journalism programme, he is a founding and council member of the Irish Legal History Society. His books include King’s Inns and the Kingdom of Ireland (Irish Academic Press, 1992), An Irish-American Odyssey: The Remarkable Rise of the O’Shaughnessy Brothers (University of Missouri Press, 2014), The Enigma of Arthur Griffith: ‘Father of Us All’ (Merrion Press, 2020) and Kenmare: History and Survival – Fr John O’Sullivan and the Famine Poor (Eastwood, 2021). His most recent journal article, ‘“It is Notorious that a Lawyer Cannot Draft His Own Will Clearly”’ (Irish Jurist, 68 [2022]) looks at British and Irish lawyers who worked on the text of the Treaty.

The author welcomes observations on the article and the correction of any errors, at [email protected]

One Response to "A CHALLENGE: Rewriting Arthur Griffith’s role in the Treaty negotiations"