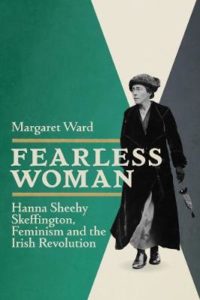 On the second day of the Rising in 1916, Hanna and Francis Sheehy Skeffington walked the two miles from their home in Rathmines to the City Centre. Frank, a dedicated pacifist, pleaded with citizens to stop looting the abandoned shops of the city. Hanna proceeded to the GPO to assist the insurgents in any way she could.

On her arrival she was surprised to find her cherished 75-year-old uncle Father Eugene Sheehy playing an active role alongside Pearse and Clarke.

At 5.30pm that afternoon, Francis and Hanna met at the offices of the Irish Women’s Franchise League (IWFL). They were aware of the growing risk of roaming the streets and so Hanna made for home, with Francis to follow later.

In Fearless Woman, Margaret Ward utilises a significant body of primary source material to produce a revealing insight into a towering figure in Irish history.

That was the last time the young married couple saw each other. Frank was arrested by British soldiers that evening as he walked home. They mistook him for one of the rebels and shot him that night in the yard of Portobello barracks. Months later, when a friend wrote to her asking how she was coping with the grief, she replied ‘Sometimes it is harder to live for a cause than to die for it’.

In Fearless Woman, Margaret Ward utilises a significant body of primary source material to produce a revealing insight into a towering figure in Irish history. Born Hanna Sheehy in 1877, daughter of Home Rule Party MP David Sheehy, she married Belfast journalist Francis ‘Skeffy’ Skeffington in 1903. Born in Cork, she grew up in the fashionable surrounds of Georgian Dublin in the family home at Belverdere Place.

Much like Roy Foster’s Vivid Faces (2015), the early chapters of Fearless Woman are a window into the social world of the young revolutionary generation in early twentieth century Dublin. The families of James Joyce, Tom Kettle and Francis Cruise O’Brien were frequent visitors to the Sheehy family home. Her childhood and formative years were privileged to an extent. She received a University education, something beyond the reach of most people, let alone women. But there was never wealth or extravagance, something which continued throughout her life.

Hannah Sheehy Skeffington’s background was quite privileged, but her career as a feminist and later republican activist was not.

Commitment and sacrifice were to the forefront in Hanna Sheehy Skeffington’s pursuit of her feminist ideology. At University College she fought for co-education and women’s access to college societies. Later she would lose a teaching job in Rathmines College after she was arrested for taking part in a protest organised by the Irish Women’s Franchise League (IWFL).

Her relationship with her politician father David Sheehy also suffered. Like most members of the Irish Parliamentary Party at the time, he was not supportive of the suffragist movement and distanced himself from his daughter, at one stage he even banned her and Frank from visiting the family home.

These were formative years for Hanna and for her vocational commitment to feminism, all the while her reputation as a public speaker and writer on feminist issues continued to grow.

Ward also examines Sheehy Skeffington’s ventures into party politics in independent Ireland. Unlike Countess Markievicz, Hanna was conflicted by the exercise of state building and how little consideration it gave to equality and women’s rights.

She was one of six women appointed to the Fianna Fail executive following the Sinn Fein split in 1926, bit gradually became alienated from the party.

She was one of six women appointed to the Fianna Fail executive following the Sinn Fein split in 1926. Ultimately, Ward concludes of Sheehy Skeffington’s experience of operating inside the political system, that, while she had the personal respect of many male politicians, she became alienated by the attitudes of leading Fianna Fail figures such as Eamon De Valera and Sean Lemass towards women in the political sphere.

Her anti-treaty politics meant she rarely had regular work in the new Free State. In 1923 she was removed from a list of examiners because of her anti-treaty position, costing her one of her only regular sources of income.

From then on she relied mostly on journalism for money. As such, she was a constant public voice in the newspapers of the time, she commented on everything from politics to female achievements in athletics and aviation. Outside of Ireland, her influence grew in the 1920’s and 30’s and she spoke about Irish and feminist issues at conferences and meetings as far away as Russian and the United State regularly.

Ward has used the staggering amount of personal correspondence available from Sheehy-Skeffington to create a revealing window into her subject’s world. While the narrative is often dense and filled with a detailed chronology of Sheehy Skeffington’s life, there is a strong sense of knowing the person, ideologically and emotionally. When she travelled, she wrote regularly to her son Owen and in these letters we get a sense of the sacrifices of her work and the reality of life as a widow.

Above all though what emerges in Fearless Woman is Sheehy-Skeffington’s intellectualism and the admiration of others towards her. Ward re-tells a fascinating public encounter between Sheehy-Skeffington and writer Sean O’Casey. In 1925 she wrote to the Irish Independent saying that she had taken part in a protest at the Abbey Theatre against O’Casey’s play, The Plough and the Stars, because it was ‘making a mockery …of a revolutionary movement on which the present structure claims to stand’.

This began a series of rebuttal letters between Sheehy-Skeffington and O’Casey in the pages of the Independent.

Aside from its biographical importance, Fearless Woman retrieves and explains more of the the nuances of Irish feminist history in this period.

A debate between the two was organised in Dublin by the Universities Republican Club. O’Casey argued that his play reflected the realism of Easter Week while Sheehy-Skeffington claimed the romantic narrative of 1916 reflected the bravery she had witnessed in the flesh during the Rising.

Accounts from the debate indicated that Hanna delivered a subtle, perfectly modulated speech and that her skills as a public speaker overpowered O’Casey.

Aside from its biographical importance, Fearless Woman retrieves and explains more of the the nuances of Irish feminist history in this period. While there is admiration for Sheehy Skeffington in the book, the narrative is also impartial against the backdrop of her polemical views.

Ward has conveyed how the unique voice and intellect of Hanna Sheehy Skeffington equalled that of her revolutionary era peers. Fearless Woman provides a portrayal of Sheehy-Skeffington’s complex personality, her social and family world and most clearly, her unrelenting commitment to the dual ideal of a free Ireland with equality between men and women.