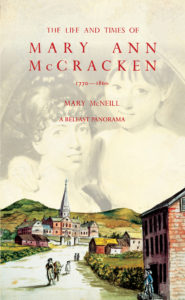 “Is it not the duty of every person to promote the happiness of others as much as lies in their power?”

The Life and Times of Mary Ann McCracken shines a biographical spotlight on a rather neglected woman in Irish history. It is in fact almost astonishing that Mary Ann McCracken is not better known as she was an Irish historical figure who led the sort of life that completely supported her assertion that it was “better to wear out than to rust out”.

The repute of her older brother Henry Joy McCracken, of United Irishmen fame, seems to have overshadowed Mary Ann’s extraordinary life as a passionate advocate of and an indefatigable activist for the rights of women, of the poor, and of children in particular as well as being a fervent abolitionist.

This reissue of a 1960s biography by Mary McNeill, a kindred spirit who also dedicated her life to voluntary and charity projects in Belfast, aims to make Mary Ann a much better known figure. Driven by The Belfast Charitable Society and their Mary Ann McCracken Foundation, The Life and Times of Mary Ann McCracken was published in time for her 250th birthday in 2020.

Mary Ann McCracken was a passionate advocate of and an indefatigable activist for the rights of women, of the poor, and of children in particular as well as being a fervent abolitionist.

As the acknowledgments in this excellent biography of Mary Ann McCracken point out there have been few changes to the original and “the text remains largely unaltered from the original” but the footnotes have been updated to reflect changes in archive numbering, etc.

So, where did this fully-lived life begin? McCracken was born in Belfast, the fifth of six children on 8 July 1770. Her father was a leading Presbyterian shipowner, Captain John McCracken, while her mother Ann Joy came from an important Huguenot family who had founded the Belfast News Letter.

Mary Ann’s belief in social reform was nurtured in that cradle of liberal Belfast Presbyterianism and accordingly she was educated in a progressive manner at David Manson’s co-educational school. There she read, daringly for her time and for a woman, William Godwin, Mary Wollstonecraft, and Thomas Paine among many other writers influenced by the Enlightenment and the American Revolution.

As the author underlines, “in the first half of her life, Mary is a glowing example of the Ulster middle-class liberalism that flourished in the short heyday of Belfast’s Georgian brilliance at the close of the eighteenth century”. With three brothers in the United Irishmen, Mary Ann McCracken would soon find the opportunity to both witness and take part in an attempt to put the principles of Liberty, Equality and Fraternity into practice.

Mary Ann stood by her brother during his trial and execution and took custody of his daughter thereafter.

The majority of The Life and Times of Mary Ann McCracken is taken up with the United Irishmen and the aftermath of their rebellion. After their defeat at the Battle of Antrim in June 1798, Mary Ann provided her brother Henry Joy McCracken, now on the run, with money and supplies while making arrangements for him to flee to America.

Before he could do so, however, Henry was captured. She was by her brother’s side throughout his trial and subsequent hanging but maintained her composure until the end. As she later stated, “I did not weep till then”. Afterwards her bravery continued when she took personal responsibility for Henry’s illegitimate daughter despite family opposition.

Mary Ann’s active support of the United Irishmen continued with assistance provided to Thomas Russell including paying for his trial defence, his tombstone and she even organised financial aid for Russell’s sister after his execution.

In the 1840s, Mary Ann was an active participant in Richard Robert Madden’s quest to compile a history of the United Irishmen providing him with important and illuminating letters which are now in Trinity College Dublin.

As historian Marianne Elliott points out in her new foreword to The Life and Times of Mary Ann McCracken, “the real strength of Mary McNeill’s book is that she allowed Mary Ann to speak for herself through her extensive correspondence”. Her series of letters to her brother Henry Joy McCracken in Kilmainham gaol in particular show Mary Ann’s commitment to the United Irish cause as well as underlining her intellectual capabilities and highlighting her political views.

She argued forcefully to her brother that liberty and equality was not just for men: “there can be no argument produced in favour of the slavery of women that has not been used in favour of general slavery and which have been successfully combatted by many able writers”.

While as Elliott comments “her correspondence during the imprisonment…movingly describes the disintegration of the ideals and hope which had so marked preceding decades,” her innate determination allowed Mary Ann to continue to dream that “the present era will produce some women of sufficient talent to inspire the next with a genuine love of Liberty and a just sense of [its] value.”

A crusader by temperament and practice, Mary Ann worked tirelessly for women and children through the Poor House Ladies Committee. She helped organise apprenticeships for poor children so they could be raised “from their present degraded state of neglected outcasts…with which they are frequently upbraided.”

In her late eighties, Mary Ann took a prominent role in the anti-slavery movement and drove the Women’s Abolitionary Committee in Belfast with her characteristic energy.

Her charity interests didn’t stop there; she was also President of the Ladies Industrial School and campaigned vigorously to stop children working as chimney sweeps. Mary was an ardent supporter of women’s equality and suffrage as well as a supporter of prison reform. Somehow, alongside this incessant campaigning, Mary Ann found time to run a muslin manufacturing business with her sister for some years from the 1790s.

In her late eighties, Mary Ann took a prominent role in the anti-slavery movement and drove the Women’s Abolitionary Committee in Belfast with her characteristic energy. She wouldn’t eat sugar as she felt slavery sustained its production and found that America formerly “considered the land of the great, the brave” should now “more properly be styled the land of the tyrant and the Slave”. She was disappointed too in her beloved Belfast and thought the city “once so celebrated for its love of liberty” was now “sunk in the love of filthy lucre”.

She even handed out anti-slavery leaflets on Belfast docks to persuade emigrants embarking for the United States to her point of view. Finally, as The Life and Times of Mary Ann McCracken points out she was a founding member of the Belfast Harp Society and supported Edward Bunting in his task of collecting traditional music. Mary Ann died on July 26, 1866 at the venerable age of 96 years and is buried alongside her brother in Clifton Street Cemetery in Belfast.

In her superb biographical work Mary McNeill has really caught the determined energy of Mary Ann McCracken through her skilled use of primary material particularly in her family correspondence. Not only a vivid portrait of a remarkable woman, The Life and Times of Mary Ann McCracken is also a fascinating insight into the personalities of leading United Irishmen and moreover a compelling account of Belfast during her long lifetime.

As Mary McNeill underlined in the original introduction, Mary “was very definitely a product of two great movements…the Enlightenment and the Industrial Revolution; and there are few records of a single life that responded with such vigour to both these influences.”

With a comprehensive genealogical chart of the McCracken and Joy families and well-chosen pictures in a handsome new printing from the Irish Academic Press the inspiring The Life and Times of Mary Ann McCracken would be greatly “of interest to students of these two distinctive eras.”