Review of an Exhibition at the Royal Irish Academy, Dawson Street, Dublin. By Patricia Byrne.

At the height of the Great Famine, a fierce row erupted in the Clew Bay area of County Mayo. It involved the young John George Browne, 3rd Marquis of Sligo, who had recently succeeded to the family’s Westport estate, and Edward Nangle, founder of the Achill Mission Colony in north Achill a decade earlier.

The dispute was over school meals. The object of Edward Nangle’s wrath was the administration by the Westport Board of Guardians – of which Lord Sligo was a member – of the British Relief Association school meals scheme on Achill Island. Nangle was already drawing criticism over his practice of feeding children in his Colony schools – a practice that was giving rise to the notorious charge of ‘souperism’ – or tying food aid to conversion to Protestantism.

Over the winter of 1847, he became increasingly agitated and enraged that the Achill Colony schools on the island were being excluded from the British Association scheme. He complained bitterly that the priests on the island were using the better relief available in the national schools to tempt children away from his Achill Mission schools.

Lord Sligo responded sharply with the charge that the Achill Colony had sought fit to induce starving peasants to desert the faith of their fathers by offering inducements such as feeding the children in the Colony schools. Two Great Famine relief programmes in the west aimed at giving food relief to children in their schools. Two programmes underpinned by very different principles.

The British Association scheme was a direct initiative of Count Paul Strzelecki, the organisation’s agent in Ireland in 1847. The humanitarian and non-sectarian principles which Strzelecki laid down for his initiative would become a standard of relief programmes.

The Paul Strzelecki exhibition at the Royal Irish Academy in Dublin is promoted by the Polish Embassy in Ireland.

While it is largely directed at Strzelecki’s Great Famine relief work, it briefly fills in some detail around the Count’s life: his birth in Prussian-occupied Poland; a doomed love affair; a world tour over a decade exploring the Americas and Australia; his travels in New South Wales and Tasmania which made him an acknowledged expert on Australian geology and natural history. An aspect of his travels, not detailed in the exhibition, is Strzelecki’s relationship with Jane Franklin and her explorer husband John, then lieutenant-governor of Van Diemen’s Land. Paul spent two years in Tasmania as a guest of Lady Jane and Sir John, travelling, conducting experiments and writing.

Coincidentally, a year before Jane and John Franklin departed for Tasmania, the pair had visited the Achill Colony. While acknowledging the good work being done there by Edward Nangle around literacy, temporal improvements and medical services, Jane had deplored the manner by which the clergyman castigated Catholic doctrines sincerely held by the islanders. One wonders if Paul Strzelecki and Jane Franklin touched on Ireland or Achill during ‘much talking’.

Strzelecki returned to London in 1843 to complete a book on the geology of New South Wales and Van Diemen’s Land. The exhibition notes his interest in the aboriginal people, which prefigures his humanitarian involvement with the stricken Irish. He castigated the British Government’s treatment of the dispossessed natives and, speaking on their behalf, wrote: ‘Our fields and forests which once furnished us with abundance of vegetable and animal food now yield us no more. They and their produce are yours. You prosper on our native soil and we are starving.’ (1845) His words could equally be placed in the mouths of the Irish in their impending catastrophe.

Strzelecki became a naturalised British subject. Motivated by a desire to offer useful and practical service, in early 1847 he volunteered for unpaid relief work with the British Relief Association which raised the largest amount of money for Irish famine relief.

In January 1847, he headed to Ireland on board the steamer HMS Urgent, loaned by the government to transport charitable supplies to Killybegs and Westport.  The exhibition panel dealing with the Count’s arrival in Ireland carries an Illustrated London News image (there are many such images throughout the exhibition) of people waiting, hands raised in pleading, as a relief ship approaches in the distance.

Strzelecki is shocked by the scenes of suffering he witnessed, particularly among the children: ‘Of the fate, gloomy and awful, which overhangs the whole population that of the poor children, and the babies at the breasts of their emaciated and enervated mothers, excites the deepest feelings of commiseration.’

The Count personally championed a scheme to give direct food relief to children in the schools of the Western Union. Children between five and fourteen were given clothing and one meal a day at a daily cost of one-third of a penny for each child.

The Count personally championed a scheme to give direct food relief to children in the schools of the Western Union.

In an effort to improve hygiene, the children were required to wash their hands and comb their hair before eating. The food consisted of a daily ration of rye bread and a half-pint of warm broth.

The British Association would provide the rye meal and pay the expenses of baking the bread and buying meat for the broth. The bread was baked in Westport and delivered to schools in the Union. The scheme was extended to other ‘distressed unions’ and, at its peak, an estimated 200,000 children were being fed from all denominations.

Following the move to Poor Law relief, by which central British government aid was ended and the burden of relief placed on the Irish taxpayers,  Strzelecki’s role changed. He was the only British Association agent left in Ireland to distribute its residual funds and he relocated to Dublin. In July 1848, the British Association formally suspended its work in Ireland as its funds were exhausted. Strzelecki would return in 1849 to distribute further aid raised through his own personal advocacy. Giving evidence later before a parliamentary committee, he would declare that ‘the calamity which has befallen to Ireland is an Imperial calamity’.

Strzelecki condemned the British government’s ending of food aid to Ireland in 1847 and declared that ‘the calamity which has befallen to Ireland is an Imperial calamity’.

In early 1848, Lord Sligo chaired a meeting of all the local relief committees at Westport Courthouse. They passed a resolution of thanks to be conveyed to the British Association in London and to its representative Count Strzelecki; ‘whose urbanity, courteous demeanour and anxiety for the destitute is deserving of our heartfelt gratitude’.

Paul Strzelecki died of cancer in London in 1873. A few years prior to his death, he again met Adyna Turno – his early love – with whom he had corresponded for many decades, but they never married. In his will he ordered the destruction of his papers and the burial of his body in an unmarked grave which took place in Kensal Green cemetery. In 1997, his remains were repatriated to Poland.

By its nature – a summary of a life in ten storyboard panels – this exhibition cannot do justice to the complexity of Strzelecki’s character nor the longevity of his career. An entry in the Australian Dictionary of Biography notes that he was ‘energetic and ambitious, a capable and thorough scientist, an excellent administrator, a man with a gift for friendship, but resentful of energy and not quick to forgive those … who he thought had treated him badly.’ The entry speculates that, perhaps, the renunciation of marriage and the loss of his early faith are reflected in the pessimistic terms of his will. 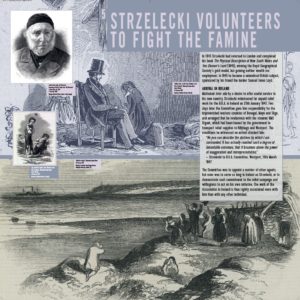 Richard Lynch, the government official who worked closely with Strzelecki in Westport, wrote to the Count about the direct results of his labours:

‘I have pleasure in bearing my testimony to what is now so generally acknowledged, that had it not been for your timely interference in this as well as the other unions of the West of Ireland, thousands must have fallen victims to famine and disease.’

Almost 170 years ago, Paul Strzelecki walked the famine roads of the west of Ireland, observing ‘the fate, gloomy and awful which hangs over the whole population’. In particular, the destitute condition of the children excited in him the deepest feelings of compassion. Witnessing directly such pain, he quickly devised a new mode of relief to clothe and feed the children in the schools.

The programme was practical, direct, devoid of ideology, non-sectarian and effective. This exhibition will enable a wider audience to learn the story of Paul Strzelecki’s Great Famine relief work which shines luminously in its humanity and practicality.

Paul Strzelecki: A Forgotten Polish Hero of the Great Irish Famine runs at the Royal Irish Academy, Dawson Street, Dublin until the end of August 2019.

Patricia Byrne’s book The Preacher and The Prelate: the Achill Mission Colony and the Battle for Souls in Famine Ireland is published by Merrion Press.