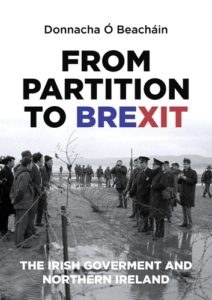 The spectre of Brexit hangs over these isles, both Britain and Ireland; a menacing cloud of uncertainty. Due to the potential fallout that may arise if or when the political exit of Britain from European stage, occurs, Brexit understandably has many anxious spectators on the island of Ireland.

The potential for Brexit to undermine and jeopardise the future of Northern Ireland and indeed North/South relations, provides the impetus for this study of the attitudes and policies of successive Irish governments to the border and to Northern Ireland.

Interestingly, despite the obvious interest and merits of such a study, Ó Beacháin’s monograph is the first book to chart the political and ideological evolution of Irish government policy towards Northern Ireland from the partition of the country in 1921 to the present day.

Beginning with a brief yet informative synopsis of the major, and some minor, political parties in the Republic of Ireland and its precursor the Irish Free State the author casts his readership net wide enough the engage both the casual and informed reader alike; among the indices a similar list of each Irish governments since the inception of the Free State is a welcome and instructive tool.

From this point onwards Ó Beacháin’s narrative carves a chronological path through almost a century’s worth of governance and state relations. As other reviewers have noted such an approach results in a narrative which is underpinned by an uneven structure, with the bulk of the book devoted to the period from 1970 onwards.

However, one might reason that the respective weight of each chapter directly correlates to the dearth of state interaction and justifiably so some chapters require greater attention than others.

With the death of Commander in Chief of the Free State Army, Michael Collins, in 1922 attempts to destabilise the northern state by way of military intervention withered away as the Provisional Government moved to consolidate its rule over the twenty-six county state.

The failure of the Boundary Commission to deliver upon its implied promises left a politically impotent Free State government bereft of any cogent Northern policy. Given the high hopes that northern nationalists invested in the commission to right the wrongs of partition, one can only muse at the indignity felt as the calamity unravelled.

The failure of the Boundary Commission (provided for under Article 12 of the Treaty) to transfer nationalist areas to the Free State exposed glaring deficiencies in the Free State government’s approach to the issue of partition. Embarrassed, out of his depth, and facing mounting pressure from representative opinion throughout Ireland, the Free State’s appointee to the commission, Eoin MacNeill resigned from his post on 20 November 1925.

President of the Executive Council, William T. Cosgrave, was quick to distance himself and his government from the debacle and publically feigned ignorance of the workings of the commission, shifting responsibility for the fiasco upon MacNeill. Eventually, a deal was struck which saw the British Government agree to waive whatever monies they were likely to receive under Article 5 of the Treaty (the Free State’s share of the Imperial war debt) in return for retaining the status quo vis-à-vis the border.

Attempting to gloss over the inadequacies of his government’s approach, Cosgrave heralded the resultant trade-off of Article 12 for Article 5 as a ‘damn good bargain’, one which saved the state from bankruptcy. Cleaved from its erstwhile compatriots in the North, the Free State focused its attentions on internal matters.

Ó Beacháin shows how it was this ruthless insular political bargaining, which marked the onset of what the he terms a ‘psychological detachment’ between the government in the South and the people in the North.

Cumann na nGaedheal’s political abandonment of northern nationalists and apparent jettisoning of the Treaty’s promise of a united Ireland provided much ammunition for the invective of their political opponents, namely the nascent Fianna Fáil, comprised of many leading lights from the Republican side of the Treaty cleavage.  Notwithstanding the revolutionary pedigree of its members, Ó Beacháin  argues that de Valera’s Fianna Fáil was just as happy as Cosgrave’s Cumann na nGaedheal to compromise on the issue of partition when it paid dividends for the southern state.

Throughout the 1930s, 40s, and 50s the Irish government focused their attention upon achieving the greatest measure of autonomy for the twenty-six county state, notably the issue of the Treaty ports, membership of the United Nations, and the declaration of the Republic. Although governmental rhetoric often denied the fact, the reality was that the North must wait.

That Irish governmental attitudes and indeed policy, were at best ambivalent, unrefined and often contradictory is a constant, Ó Beacháin shows, in successive native governments from the establishment of the Irish Free State to the present day. Throughout the years, and despite assurances of the primacy of the border question and Irish reunification, state policy and public pronouncements rarely coincided. Such duplicity was a notable feature of Fianna Fáil during the reign of Éamon de Valera.

For example, de Valera candidly told Sir John Maffey (the UK’s first ambassador to Ireland) that ‘if he were to-day (1946) a young man in Northern Ireland, he felt he would be giving his life to fight the existing order of things’, in spite of the fact that his government had interned over 1,500 Irish Republicans since 1939; an act made all the more contrived given the fact that it was Fianna Fáil who had reintroduced the draconian anti-subversive legislation originally enacted by its more conservative opponents Cumann na nGaedheal (The Offences Against the State Act, 1939).

With the outbreak of the euphemistically titled ‘Troubles’ in Northern Ireland many Irish politicians and their progeny, who had themselves fought to assert Irish national independence against the British Empire, found themselves in the unenviable position of reconciling their past actions with a resurgent I.R.A. who were waging their own armed struggle north of the border.

Although the I.R.A. had some vocal support among the Fianna Fáil cabinet and backbenches, and although outwardly the government sought to remind northern nationalists that they had not been forgotten, they simultaneously discouraged the actions of the I.R.A.

This book offers a concise and engaging narrative of the evolution of Irish government policy towards Northern Ireland without ever diverging from the path it set out on.

It was at this point, Ó Beacháin argues, that Anglo-Irish interests coincided. As the war in the North reached fever pitch, the extent to which Dublin could flex their political muscle was revealed by the repeated refusal of both Stormont and Westminster to countenance an ‘Irish solution for an Irish problem’.

When the Sunningdale Agreement was terminated in its infancy, the prospect of an amenable solution to partition was shelved for almost a quarter of a century. It would take the deaths of over 3,500 individuals and over seventy years of political bargaining before an Irish government was given a substantial role in the day-to-day running of Northern Ireland.

At times the behaviour and response of the Irish political elite to pivotal scenarios was downright embarrassing, verging on ludicrous, and in the case of the discovery of an active MI6 agent in the car park of the West County Hotel in Chapelizod, County Dublin, uncomfortably bizarre.

Ó Beachain’s familiarity with the subject and impressive archival research deserves recognition for composing a text that is both enjoyable and informative. Overall, the attitude of successive Irish governments towards the North could largely be defined as symbolic and opportunistic. Big on rhetoric and short on actual substance, Northern policy from the inception of the Free State to the signing of the Good Friday is characterised by successive governmental failures and a lack of cogency.

An interesting, though understated, facet of this study is the extent to which Irish governmental ambivalence and apathy towards the northern state mirrored that of popular public opinion, which ebbed and flowed as the situation north of the border impacted on its southern counterparts. As this study is strictly concerned with political developments the potential to juxtapose a multi-disciplinary exposition of the social and political sciences is regrettably left unexplored. (Readers may be interested in Brian Hanley’s recent book on popular southern attitudes, as a companion to Ó Beachain’s work on high politics).

This book offers a concise and engaging narrative of the evolution of Irish government policy towards Northern Ireland without ever diverging from the path it set out on. There is little in the way of filler and Ó Beacháin’s sharp wit and eye for an entertaining quotation penetrates the weighty subject matter with great success. The author concludes his study by pondering the potential outcomes of Brexit. Whatever the outcome, its effect upon the island of Ireland will certainly provide much material for future study.