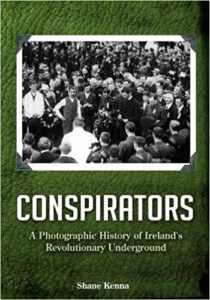 Documenting the Irish Republican Brotherhood (IRB), colloquially known as the Fenians, the importance of this publication lies in the fact that, as the author stated, it is “the first time the Fenian conspiracy has been outlined in illustrated-book form”.

Imagery and photographs associated with republican and nationalist movements have often been lacking in Irish history publications. Frequently, books displayed the portraits of a number of leaders or key individuals, but Conspirators is as much about rank-and-file Fenians as it is the movement’s eminent figureheads.

Other publications in recent years such as Brian Hanley’s The IRA: A Documentary History, 1916-2005 (2016) have also assisted historians and the general public in gaining a much clearer picture – literally – of the republican movements of the past.

It is also worth noting that The Cambridge History of Ireland, Volume IV: 1880 to the Present, edited by Thomas Bartlett and published in 2018, which covers largely the same time span, also contains a liberal helping of images. This trend is certainly to be welcomed.

Within the pages of Conspirators, there are many images not previously seen by the public. These are drawn from both national and private collections. The lion’ share, however, have been sourced from the National Library of Ireland (NLI).

Kilmainham Gaol Museum, Glasnevin Museum, and repositories overseas such as the New York Public Libraries, Library of Congress and Salford Police Museum are also utilised. As are various contemporary publications. Kenna’s own private collection, as well as that of Aidan Lambert, also add to the body of imagery contained within the book.

Kenna did not utilise the Fenian Photographs collection in the National Archive of Ireland. This collection contains hundreds of photographs of Fenians arrested during 1866 following the suspension of habeas corpus in Ireland by the British government. Essentially mugshots of the Fenians, they are not as expressive as the photographs found in the NLI collection, which were taken in photographers’ studios and which Kenna did make extensive use of.

As mentioned above, the book contains numerous photographs of ordinary Fenians as well as its key leaders. The overwhelming sense garnered from the photographs of these ordinary Fenians is that they were working class in character. They were not clothed in rags, but suits. The suits, however, often appear worn – as if those wearing them only owned the one.

Patrick Walters and Morgan Burke, two Fenians arrested in 1866 and 1867 respectively, are perhaps the most interesting of these suit wearing IRB men. Both are seen smiling in their photographs. Oddly so, perhaps, for a pair just arrested and likely facing harsh penalties for sedition and conspiracy. As Kenna explained, this was “representative of the novelty of photography for many Fenian prisoners, the camera being a relatively new invention”.

The photographs of Walters and Burke are found in the first section of the book “From Conspiracy to Revolution”, which documents the years 1858-67. The second section, entitled “Reorganisation and a conspiracy of shadows”, covers the period 1868-1916.

This second section is more substantial and reflected Kenna’s own expertise on, and interest in, the late Victorian period. Here the faces of The Irish National Invincibles, responsible for the Phoenix Park assassinations of 1882, and the dynamitards of the 1880s, fill the book’s pages.

Prior to these sections, in several introductory pages, the scene is set in a crisp and clear writing style. The continuity of the IRB over a sixty-year period, and the importance of the US to the wider Fenian movement, is emphasised.

The origins of the IRB in the democratic republican milieu of the 1840s and Young Ireland are sketched. So too are the operational structures the Brotherhood utilised from 1858-65 when James Stephens commanded almost total control of the organisation.

Although the overwhelming focus is on photographs of the Fenians themselves, those agents of the British state charged with disrupting and suppressing them are also displayed in the book. Figures such as F.F. Millen and Henri Le Caron, both long time spies within Fenianism, are portrayed.

As is agent provocateur Red Jim McDermott, who encouraged Fenians to plan and carry out bombings in both Britain and Ireland in order to set them up for arrest and prosecution. Richard Pigott, notorious for forging letters in an attempt to implicate Parnell in the conspiracy and violence of the Land War, is also depicted.

Of interest here too are the photographs and artists impressions of the primitive bombing contraptions used by O’Donovan Rossa’s “skirmishers” to carry out attacks in London during the mid-1880s.

Several fascinating and significant documents, marking key points in the history of the Fenian movement, are also reprinted in Conspirators.

A letter from James Stephens to Michael Doheny, taken from a later personal account of Joseph Denieffe, is reproduced. Stephens wrote to the US to Doheny from Paris in January 1858 to lay out to the Irish-Americans the conditions by which he would act as leader of the new movement.

In the letter, Stephens raises the issue of finance and states that “the men of property are not with us”, drawing a clear line of progression from Wolfe Tone who sought support from “the men of no property” as the 1798 rebellion approached.

The seminal 1867 Proclamation is also reprinted here. The document, issued in the lead-up to the March 1867 rising, was more advanced than the better known 1916 Proclamation and stamped a clear left wing and internationalist mark on events.

Also included is the IRB Constitution of 1873, important for the way that it set out a new roadmap for Fenianism. From that point onwards, rather than staging a rising without the support of the Irish people, the intention was for the IRB to insert itself into the centre of Irish nationalism and Irish society.

The IRB could then exert its influence in order to bring about the conditions that would breed fertile ground for rebellion. This it duly did, with its members becoming involved in, among other organisations, the GAA, Conradh na Gaeilge and, later, the Irish Volunteers.

Overall, the book is full of artistic depictions and photographs of the central moments in Fenian history, including daring rescues and assassinations, key conventions, courtroom trials, parliamentary commissions, demonstrations, funerals and battles, and, most importantly, the faces of the conspirators themselves.

Conspirators would serve as an accessible introduction to the IRB for general readers and history students at both second and third level. With a wealth of images that might be deployed in presentations, and so forth, which are not easily searchable online, it is also an invaluable source for scholars of Fenianism and Irish republicanism more widely.

Kerron Ó Luain is an historian from Dublin, Ireland. He has been on a Fulbright Scholarship teaching Irish at Villanova University, Pennsylvania, for the past year. His forthcoming article ‘“Craven subserviency had vanished. Bitter hostility had arrived”: agrarian violence and the Tenant League on the Ulster borderlands, 1849-52’ will appear in Irish Historical Studies in May.