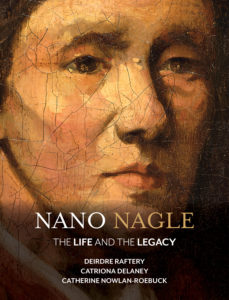 An effusive tribute by the Australian feminist Germaine Greer is perhaps not the first thing one would expect to adorn the back cover of a book on Nano Nagle, the eighteenth-century foundress of the Presentation Order of Catholic nuns.

The quote by Greer, a pupil at a Presentation convent in Victoria in the early 1950s, is suggestive of the key themes the book explores.  Greer’s praise for the caring nature of the Presentations she encountered – ‘they loved me more and they worked harder on me than my mother did’ – is indicative of their status as a leading provider of Catholic education internationally, one which dates back to the convent Nagle founded in Cork City in 1775. Their presence in Australia illustrates the manner in which Nagle’s order spread after her 1784 death, first across Ireland, and then across the world.

Nagle founded a convent in Cork city in 1775. Her Presentation order later spread around the Catholic world.

Now, three scholars from University College Dublin, Deirdre Raftery, Catriona Delaney and Catherine Nowlan-Roebuck, have produced this comprehensive study on Nagle’s legacy for the tercentenary of her 1718 birth.

Those approaching this book expecting to find a straightforward biography will be disappointed. Perhaps due to a paucity of archival sources – there are scanty records pertaining to much of her early life, including her education on the continent and her postulancy as a nun – only the book’s first chapter deals directly with Nagle herself. The remaining chapters discuss the growth of her Presentation Order in the two centuries after her death, with a particular emphasis on its role in Catholic education.

Nonetheless, Nagle remains a thread connecting the chapters together.  Coming from an affluent and educated family in Ballygriffin, Co. Cork – Edmund Burke was a relative – her desire to ameliorate the conditions of Cork City’s poorest from the 1750s onwards fed into the emergence of the Presentation Sisters, and were reflected by the activities of the Presentations that followed her. What emerges is a significant legacy that traverses five continents over two centuries.

The authors note that in comparison to Edmund Ignatius Rice – founder of the Christian Brothers and Presentation Brothers, two Irish religious orders who also had an international impact – Nagle’s career has been comparatively neglected by scholars. The way in which women religious have often been denied the recognition they deserve is a recurring theme of the book. The authors offer a telling anecdote, noting that while Presentation nun Sr. Catherine Condon did considerable research on Nagle for an earlier book on the Presentation foundress, Fr. T.J. Walsh, her male co-researcher, received sole credit as the publication’s author.

Throughout the book, Raftery, Delaney and Nowlan-Roebuck push against the narrative that nuns were passive agents who obeyed bishops unquestioningly. Rather, they were keen to negotiate with ecclesiastical and state authorities to advance what they felt was in the best interests of their order, and were not diffident in disagreeing or placing conditions on the requests of ecclesiastics.

Following Nagle’s death, the Presentations grew rapidly in Ireland during the early nineteenth-century, amidst a broader rise in religious vocations. Raftery, Delaney and Nowlan-Roebuck highlight how they became a leading order of women religious in Ireland, funding their expansion both internally through ecclesiastical sources and nuns’ dowries and externally through donations from wealthy benefactors and charity events such as charity sermons, bazaars, and prize draws.

While based across Ireland, their convents remained predominantly clustered in south Munster and south Leinster, reflecting Nano Nagle’s Cork roots.

The authors’ emphasise that the long-term success of the Presentations should not mask the difficulties they encountered in this formative period, with many succumbing to disease while in their thirties.

The Presentations remained an important aspect of Irish education into the twentieth-century, and the order placed considerable importance on the need for sisters to acquire strong Irish language skills, acquiring a retreat in the Waterford Gaeltacht.

In discussing the Presentations’ growth internationally, the authors particularly focus on Newfoundland and England, drawing upon Presentation archives in both polities. In 1833, four Presentation Sisters from the Galway convent founded a community in Newfoundland, Canada, following an invitation by Bishop Michael Fleming, the island’s Vicar-Apostolic, to provide education for Catholic girls.

While Fleming asserted in a report to Rome that it was primarily through his own determination that the Presentations came to Newfoundland, Raftery, Delaney and Nowlan-Roebuck push back against this, instead emphasising the agency and initiative of the Galway Presentations who made the initiative a success. The Galway Convent’s Superioress, Mother Power, placed strict conditions on Fleming in agreeing to his request, stipulating that the Galway community had the power to recall the four sisters any time after six years.

In 1833 nuns from Galway arrived in Newfoundland, Canada, eventually founding 15 convents there.

The Galway nuns were warmly received when they arrived in St. John’s harbour in 1833, with ‘Protestants, Orangemen and all kinds of people’ amongst the large crowd which greeted them. But their early history in Newfoundland was far from easy, and it was almost a decade before the first four arrivals had a proper convent to call home.

Both the Presentations and the Sisters of Mercy, who attempted to establish a foundation in Newfoundland in the 1840s, lost several members of their communities to diseases such as typhus and consumption. The Presentation Sisters endured and went on to have a strong impact on Newfoundland, with fifteen Presentation Convents opening there in the nineteenth-century and thirty-four opening in the twentieth-century.

The Galway convent continued to be an important source for Newfoundland Presentation nuns, and the authors delineate the role of chain-migration in transforming the Presentations into a truly international order.

Meanwhile, in England, the Presentations first established a community in Manchester in 1836. It was an auspicious time for English Catholicism; Catholic Emancipation had occurred only a short time before, and the Catholic hierarchy in England and Wales would be restored in 1850.  The considerable poverty of the Irish Catholic slums in Manchester were noted by many contemporary observers, including a young Friedrich Engels, and the Presentations worked amongst the most deprived communities in Victorian Britain.

While the English Catholic hierarchy actively encouraged congregations of teaching sisters to come to England in the period, the growth of the Presentation Order there was much slower than in Newfoundland. It was only by the very end of the nineteenth-century that the Presentations made another foundation in England.

This is a strong contribution to scholarship on Irish Catholicism, Irish women’s history and Ireland in transnational context, opening up new avenues for further research.

The authors argue that the Presentations were perceived by many English clergy as a less sound financial ‘investment’ than some of the continental teaching congregations as, in contrast to the latter, they provided free education to the poor and did not exact income for their services. The Presentation Sisters were also hesitant about making new foundations if they felt it was not in the order’s best interests, again highlighting their agency.

The Presentations also faced considerable anti-Catholic prejudice when they first arrived in England, as nuns were a particular target of anti-Catholic polemicists. In a manner inverse to Catholic concerns about Souperism in Ireland, the nuns were accused of attempting to convert the Protestant poor to Catholicism through their charitable works.

Yet the Presentation Sisters’ focus on communities marred by poverty was admired by other non-Catholics, and convent annals highlight examples of friendliness and helpfulness from neighbouring Protestants. The Presentations saw significant growth in England in the twentieth-century, and by the late 1950s had seventeen branches operating there. Convent annals allow the authors to delineate how the tumult of the First and Second World Wars shaped Presentation communities, with the nuns hosting Belgian refugees during the former and children from the heavily bombed cities during the latter.

The book’s final chapter is a broad discussion of Presentation foundations elsewhere in the world, such as the United States, Australia, India and Rhodesia. The authors note the role of Catholic nuns in the British empire as an under-researched area for scholars to take up.

The book is well-presented; three maps at the beginning outline Presentation foundations in Ireland, the United States, and the world as a whole by the mid-1960s, giving us a clear grasp from the outset of the orders’ global reach.   While its thematic structure is distracting at times – something the authors acknowledge in the introduction – overall this is a strong contribution to scholarship on Irish Catholicism, Irish women’s history and Ireland in transnational context, opening up new avenues for further research.