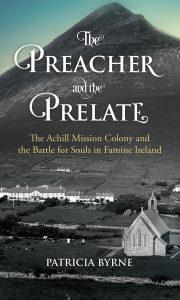 “His was a crusade that failed to touch the sinews of empathy, as a powerful vision dissolved in sectarianism and a praiseworthy idealism was seduced by the commercial dictates of landlordism and property management.”

Patricia Byrne’s book, The Preacher and the Prelate: The Achill Mission Colony and the Battle for Souls in Famine Ireland is as ‘living’ as history gets. The Achill Mission is a scar almost as livid on the island today as when Reverend Edward Nangle settled permanently at Dugort Bay in 1834. In an absorbing narrative history of the Mission, its fervent supporters, and its strident critics, Byrne has laid bare a fascinating episode of 19th century Irish history.

Nangle’s Protestant colony would eventually grow to include well-constructed cottages, schools, an infirmary, and even an orphanage. It also became a tourist attraction for Protestant evangelicals and foreign journalists.

A fundamental proselytising Protestant, Edward Nangle, in those first years, was fired by his own righteous sense of mission to transform the island of Achill.

However, the Achill Mission, despite doing considerable good, would always remain a symbol of the ills of landlordism in Ireland. In particular, Nangle’s behaviour during the Famine, he was accused of pressurising starving Catholics to choose between religion and food, left a stain on his reputation that still resonates on Achill today.

A fundamental proselytising Protestant, Edward Nangle, in those first years, was fired by his own righteous sense of mission to transform the island of Achill, a place of “ignorance and barbarism, of intellectual and moral degradation”. He was also determined to take on “the forces of religion, imperialism, famine and landlordism”. To do so he would have to fight against both his own volatile temperament and his arch rival, the prelate of the title, Catholic Archbishop and fiery preacher, John McHale of Tuam.

Although the book’s title gives equal weight to the preacher and the prelate, Nangle is undoubtedly the main character here. He and his manifold shortcomings come alive through Byrne’s assiduous research and even-handed narration. Nangle was a fanatic in the true sense of the word; almost maniacal in his vicious attacks on what he saw as the islanders’ devilish Catholic rites.

The author contends that Nangle suffered from “acute manic depression, what would nowadays be termed bi-polar disorder”. Certainly, his mental and physical health were constantly at issue throughout his life.

Even before he came to Achill, his mental health was in question. He suffered a breakdown that left him “prostrate on his drawing room sofa, unable to speak, using sign language like one deaf and dumb.” Crucially, in the middle of the Famine in 1846, his health failed completely, “his collapse was total – physical, mental, and psychological”. The author asserts, quite correctly, that his mental dysfunction contributed hugely to the ultimate failure of the Achill Mission.

Nangle’s stated ambition was to save the souls of the island’s inhabitants from hunger, illiteracy, and as he saw it, the “filthy and blasphemous absurdities” of Catholicism. He would reward converts with education, proper housing, and employment, a formula that Byrne characterises as “break the hold of Catholicism on the tenants, promote evangelical education with good moral living, and improved estate efficiency would follow.”

Nangle’s stated ambition was to save the souls of the island’s inhabitants from hunger, illiteracy, and as he saw it, the “filthy and blasphemous absurdities” of Catholicism.

While he was helped by his genuinely Christian friend, and a friend to the islanders, Dr Neason Adams, the Mission was always hamstrung by the volatile character of Nangle. He was completely immoderate in his views, disparaging of opposing views and openly mocked the Catholic faith. In addition, even though Nangle learned Irish so that his mission could be preached in the islanders’ native tongue, he showed no empathy for the people and lacked any sympathy for their culture.

His own character limitations were compounded by the arrival of the hard-hitting Archbishop McHale inspired by Catholic Emancipation and determined to throw his spiritual weight around. McHale’s goal on Achill was clear; the Mission’s destruction by any means possible.

He called upon Catholic islanders to “make a solemn promise…not to have anything to do with the Achill Mission people” and characterised the Mission as “no place outside of hell which more enrages the Almighty”. He quickly became Nangle’s adversary in the vicious public battle that now ensued, ably abetted by Father James Henry who according to McHale had “the zeal of a saint and the soul of a hero”.

While none of these personalities are overly sympathetic, they did share some significant similarities. Byrne asserts that both Nangle and McHale were alike “in terms of skills and characteristics”. They shared “an ability to deliver powerful rhetoric not tempered by prudence, restless energy, combative natures and an unshakeable belief in their version of the truth.” Tellingly, she also contends that they both showed “a dangerous propensity for egomania and narcissism”.

The quarrelling pair had a liking for public slagging matches, often through their respective pet papers, The Tablet and Nangle’s Achill Missionary Herald. This public dispute was unrelenting and rancorous, not surprising considering their extreme characters. Their confrontations had at least one good outcome though, “the explosion of new schools in 1830s Achill was remarkable”.

Nangle was a gifted propagandist and the Achill Missionary Herald, an important source for Byrne, “was his most important instrument in sustaining his Achill enterprise”. Proclaimed by the fundamentalist Protestant community to be the “Apostle of Achill” and like “another Luther”, Nangle was a proto-televangelical.

He attracted enthusiastic support from a worldwide audience of fellow believers whose subscriptions of up to £6,000 annually were the foundations upon which the Achill Mission was sustained. Eventually though, converting islanders became a distant second to paying for the Mission’s infrastructure.

As for saving souls, Nangle had limited success and this didn’t pass unnoticed in some sections of the Protestant world. Writer-journalists Samuel and Anna Maria Hall, for example, found his methods “lacked ‘that gentle, peace-loving, and persuasive zeal’ that should characterise true Christian charity”.

Other influential Protestant figures concluded that it was “a complete failure…No good has arisen or can possibly arise from the Colony conducted as it is.” American visitor Asenath Nicholson, who particularly infuriated Nangle, was highly critical. She was “appalled at the converts holding in their hands Protestant prayer books which they were unable to read”. This criticism stung as Nangle and his family had suffered greatly in his mission.

He lost his long-suffering wife, Eliza and ten of his children during his mission years. Eliza was “totally destroyed by the experience”, and Nangle’s fundraising absences from Achill for months at a time didn’t help. Despite this criticism and suffering, the author contends that good work was done by Nangle and his Mission. Land was reclaimed, jobs given to converts and schools were established on the island. That, however, was before the calamity of the Famine.

While Nangle saw the Famine in typically biblical terms as “divine vengeance, the finger of God”, Byrne draws a more nuanced picture. Nangle’s impressive energy and vigour combined with “the organisational structure and tools to respond” that the Mission possessed meant that he met the challenges of the growing catastrophe of the Famine head-on.

Nangle was very active during this terrible period, buying a shipment of grain for the islanders, “raising money, doing what needed to be done and getting food to the hungry”. His critics, Protestant and Catholic, however, felt the Famine brought out his worst qualities.

Patricia Byrne has told a dramatic tale with a fiction author’s pace and panache. The Preacher and The Prelate is an extraordinary and important read.

The nub of the charges against Nangle was that “it is at his discretion to starve poor Catholics into Protestantism, or, failing that to let them starve”. He countered that he intended “to feed all the children who have been in attendance at our schools, during the scarcity”. However the reader evaluates Nangle’s behaviour during the Famine, island folk memory has him clearly tagged as a black-hearted villain.

Although fundraising remained almost as lucrative as it has been before the Famine, the tide slowly began to turn against the Mission. The purchase of the O’Donnell estate in 1850 put a huge financial strain on the Mission’s finances. Nangle also left Achill for Skreen in County Sligo and married for a second time. After 1852, he never took as active a role in the Mission again.

A decline set in; Protestant emigration, bitter internal legal disputes, the disestablishment of the Church of Ireland, and the Land Wars all contributed to a slow irreversible decline. When Edward Nangle died in 1883 it was plain that the Mission had failed in its primary purpose; it had not converted a significant number of Catholics on the island. Of those who had been converted, many emigrated to North America or eventually returned to their former Catholic rites.

Patricia Byrne says that the story of the Achill Mission fascinated her from the moment she first heard of it and was amazed that “something that happened 200 years ago could still be so alive and the trauma was so live.” From this gripping history of bitter religious conflict in 19th century Ireland,  Byrne has told a dramatic tale with a fiction author’s pace and panache. The Preacher and The Prelate is an extraordinary and important read and for this reader, a fascinating one.

3 Responses to "Book Review: The Preacher and the Prelate: The Achill Mission Colony and the Battle for Souls in Famine Ireland"