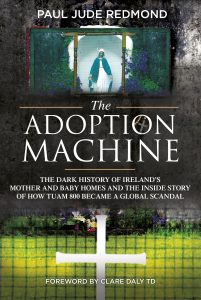 I first met Paul Redmond in 2013 at a press conference in Buswell’s Hotel.  The press event was being held to highlight the denial of access to birth records for illegally adopted people in Ireland.

Before that day I knew nothing of Ireland’s illegally adopted or of forced adoption or the nature of the state’s collusion with religious institutions to conceal the history and identity of thousands of people born in the seclusion of so called Mother and Baby Homes.

What Paul Redomond, and his colleague Theresa Tingall, divulged that day, of their own personal stories and the wider damage to society that can never be undone, enrages me still.  All of the lives destroyed by cold forced separation, itself an unimaginable hurt that will never fully heal, is magnified by the wilful collusion, lies and deliberate covering up by the state and the institutions over the decades and may prove impossible to untangle.

Nevertheless Paul Redmond has, in this book, made a serious attempt to unravel the whole sad story from the opening of the first Foundling Hospitals in Dublin in the 1730s through to the 20th Century Institutions and the most recent discovery of infant burials at Tuam.  For Paul it is a personal story, however it is much more than autobiography.

The book is divided into four sections organised chronologically.  This provides the reader with a thorough historical background of the institutions involved and the conditions that existed inside them.  The majority of space is naturally given to the twentieth century and the early decades of the current century, when Paul’s own quest for justice began.

The release of Martin Sixsmith’s story of Philomena Lee, as a cinematic tale in 2013, went some way to highlight the practice of illegal and coerced adoptions in Ireland and shockingly brought attention to the practice of deliberately misleading family members attempting to locate one another.  It was, of course, the more recent press coverage surrounding the discovery of the burial site at Tuam that blew the story wide open.

While the consistent and forensic work by journalist Conall O’Fatharta at the Irish Examiner has also exposed much of the illegal activities carried out at all of the state’s Mother and Baby Homes, including unregistered burials.  If it were not for O’Fatharta’s persistence much evidence would not have seen the light of day.

By way of context, Redmond explains his own personal story of how his first visit, as an adult, to Castlepollard Mother and Baby Home, where he was born, profoundly affected him.

He described the visit as ‘life changing’ and the impetus for his campaigning work: ‘I hunted down every scrap of information I could find about Castlepollard and in particular the Angel’s Plot’.

Over the years I have got to know Paul Redmond on a personal level and the fact that he was not prepared to stop there, but to go beyond his own experience, does not surprise me; he has unselfishly taken on a momentous task on behalf of all those stolen lives.

In his own words ‘I became an activist by default. The ‘something’ I wanted to do, I realised afterwards, included never letting people forget.’  The author has taken on a difficult task of rescuing history from those Angel plots.  This is literally a history from below and a thoughtful attempt to tell the story of so many who were buried without a name.

The Adoption Machine traces the development of orphanages back to the establishment, by Captain Thomas Coram, of London’s first Foundling Hospital in 1739.

Before this babies were often abandoned or became the inmates of workhouses where survival rates were perilously low.  It was Coram who introduced the practice of changing the babies’ names upon entering the hospital and therefore losing their identity.  Almost twenty years after Coram’s initiative the first Magdalene Laundry was opened in Whitechapel in London, its function to house ‘fallen women’.

Meanwhile, in Ireland legislation did provide for similar institutions, but as Redmond points out the conditions appear to have been significantly inferior to Coram’s London based Hospital.

On top of those figures another important statistic was revealed, that of 2,847 vanished babies with no record of their existence.  This is an important precedent in terms of a culture of undocumented infants held by institutions without a record to identify them and sadly that practice carried through to the modern era.[1]

Redmond provides a factual guide to the various ‘Homes’ established throughout Ireland, beginning with the Rotunda Girls Aid Society in 1881 through to those currently under investigation in the Commission of Investigation into the Mother and Baby Homes.

The hard attitude to single pregnant women in the early Twentieth Century is put in context in terms of both Catholic prejudice and the reign of Queen Victoria.  A public policy existed in both Ireland and Britain to ‘dispatch single pregnant girls to public workhouses where they were separated from the ‘respectable poor’ and treated appallingly.’

Naturally the appalling treatment of unmarried mothers had a detrimental effect on the health and well being of their babies.  Apart from this, the stigma and prejudice against illegitimate children persisted in Irish legislation until the 1980s.

A public policy existed in both Ireland and Britain to ‘dispatch single pregnant girls to public workhouses where they were separated from the ‘respectable poor’ and treated appallingly.

As Redmond comments they were ‘vilified as bastards, weaklings, runts’ and so on but it is the statistical evidence he provides of mortality rates that really indicates their disadvantaged status.  Throughout the 1920s infant mortality rates for illegitimate children ran as high as 34 per cent, this was approximately four times higher than the rate for legitimate children.

The central theme of the book is evident from the title; the issue of how so many children were removed from the care of their natural mothers and placed for adoption.  It is very important to note that Ireland did not have adoption legislation in place until 1952, unlike our nearest neighbours who had introduced legislation in the aftermath of the First World War.  So effectively all adoption before that date was illegal.

The different circumstances of separation are described with great care in this book.  Redmond explains that some were taken for long term boarding before being sent to industrial schools aged from 3 or 4 years until 8, or for adoption after 1952.  Other records show mothers and their children being transferred together to country homes before they were split up when the child reached 6 or 8 years of age when they could then be sent to an industrial school.

Adoptions were particularly harrowing as the following paragraph testifies:

Adoptions and transfers generally happened with little or no warning.  Sometimes mothers returned from their work assignments to be bluntly informed that their baby was gone forever. Mothers were normally called to the office and ordered to return to the wards to prepare their babies by dressing them in their best clothes.  They were then instructed to carry them to the front room in the convent.  Any protestations were met with a battery of standard responses common to all homes.  Mothers were told to ‘Get over it! You knew this day was coming.  What else did you expect?  How can you possibly look after a child on your own? Isn’t your child better off with a good Catholic mother and father?

This book can be added to a small canon of material on the subject including, in particular, Mike Millotte’s Banished Babies of 1997. Millotte specifically focused on the illegal trade of babies during the mid-twentieth century from the Homes to Catholic couples in the UK and US.

The extent of this was revealed in records of the Department of External Affairs discovered in 1996 by the archivist Catriona Crowe.  Those records relate to the illegal documents passports and birth registration that recorded the names of adoptive parents as the natural parents.  This practice essentially obscured the identities of possibly tens of thousands of people, the true figures can never be known.

The second half of The Adoption Machine deals with the attempts of the adoption community to organise and form associations, to lobby for their rights, and to have their stories brought out into the public domain.

Adoption was illegal in Ireland until 1952, but both before and after that, the Irish state and religious institutions removed babies from their unmarried mothers and out them up for adoption in return for money.

The campaigning work has two main aims, the first being to highlight their story to have a thorough investigation of the past which involves access to all records held in the hands of agencies, institutions and private individuals.  The right to those records is tied to the second aim and that is to give adopted people a right to their true identity.

The manipulation of the truth, of birth records and other data has made the task of tracing a natural parent or child extremely difficult.  That experience is fore-fronted in the movie about Philomena Lee and her son’s attempts to find each other.  Their efforts were maliciously thwarted by lies and misinformation.

This was not unique to them it is a common experience for the adopted community.  The adopted community have campaigned for decades for legislation to give them a right to access their birth records.  That legislation was eventually drafted in 2015 and moved as a bill the, Adopted Persons Tracing Information Bill 2016, but has made no further progress since.

In their attempts to highlight their stories and further their aims many in the adopted community have utilised social media as an organising tool.  Redmond goes into some detail here of the problematic nature of using social media, Facebook in particular.

This makes for interesting reading and will no doubt be a feature of commentary in the future as the problems he highlights are part of a wider pattern on the use of social media for political activity.  The breakdown in communication often caused by misunderstanding has a tendency to escalate online to a greater extent than in the real world and this has had devastating effects on online political activity.  Redmond gives a very good account of this here.

The intricacies of the disagreements between the various personnel may be superfluous information for the general reader but it does reflect on the problematic nature of trying to organise from a position of limited resources.

Overall this work provides a good and balanced history of the various institutions that incarcerated women and their children in Ireland.  It goes further to describe the lasting impact and damage that a policy of incarceration and forced adoption has had on our society and in particular on those directly affected.

The fallout is very much to the fore at present and as a society we are likely to grapple with it for some time to come.  For anyone interested in learning more on the history of forced adoption and the Mother and Baby Homes, this book is a good place to start; it gives a comprehensive overview of the history of the institutions from their establishment up to the most recent official investigations into them.

It is important that this narrative be owned by those effected from the survivor community and in that sense Paul Redmond, as a leading figure has taken a very important step.

Rhona McCord is the Parliamentary Assistant to Clare Daly TD.

3 Responses to "Book Review: The Adoption Machine: The Dark History of Ireland’s Mother and Baby Homes."