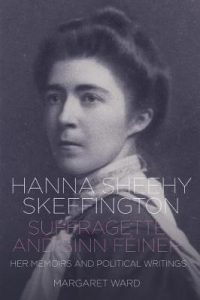 ‘Hanna Sheehy-Skeffington, I would say, was the ablest of the women we have had in public life in Ireland of the last 30 or 40 years. Among them she stood apart…she had a place of her own even among those of her political class and calibre in America and Great Britain.’

On the occasion of Hanna’s death in 1946, Cathal O’Shannon, writing in the Irish Times, highlighted her importance among twentieth century Irish women. Desmond Ryan, writing in the Bakery Trades Journal described her as a woman ‘whose like we will not see soon again’.

The Irish Press however noted that to people who did not know her personally she was ‘but a name in the newspapers’. For the current generation who might know the name but not much more, this book is an indispensable fleshing out of the extraordinary woman Hanna Sheehy-Skeffington and her immense contribution to Irish society and international feminism.

This book is an indispensable fleshing out of the extraordinary woman Hanna Sheehy-Skeffington and her immense contribution to Irish society and international feminism.

Hanna is often recalled as the widow of Francis Sheehy-Skeffington, the pacifist who was murdered by the British Army during the Easter Rising. However, as this book makes clear, Hanna is a fascinating figure in her own right.

Although Hanna herself noted that she was ‘more interested in doing things than writing about them’ she left a remarkable legacy of written material. Dr Margaret Ward, the renowned historian of Irish female nationalism, has assembled in one volume a collection of Hanna’s memoirs and political writings, published and unpublished, relating to Hanna over the course of her life (1877-1946). It is arranged thematically in chapters with each including a detailed introduction by Ward, outlining the context of the subsequent documents.

Hanna came from a family of activists at the centre of Irish public life in the nineteenth and early twentieth century. Her father David Sheehy was an Irish Parliamentary Party MP while her uncle Father Eugene Sheehy was actively involved with the Land League, and was a founding member of the GAA.

Hanna’s sister Mary married Tom Kettle and although often referred to dismissively in history books as Mrs Tom Kettle and purely as his widow, she was active in public life herself. She became the first woman ‘chairman’ of Dublin city council in 1928 and later served as chair of the Joint Committee of Women’s Societies and Social Workers. Another sister, Kathleen, married the journalist Frank Cruise O’Brien. Their son Conor became a well-known politician and writer.

In her draft of a memoir, Hanna recalled her childhood in a ‘political household’ where they played at Evictions and Emergency Men, and visiting her uncle Eugene in Kilmainham Gaol in the 1880s when he was imprisoned along with Parnell and a few hundred others. As children, they learned the work of ‘Thomas Davis, Mangan, the Poets of the Nation, Moore’s Melodies, Emmet’s speech from the dock, we read Mitchell’s Jail Journal…’

Hanna recalled her childhood in a ‘political household’ where they played at Evictions and Emergency Men, and visiting her uncle Eugene in Kilmainham Gaol in the 1880s when he was imprisoned along with Parnell

Her feminist aspirations also became evident from early on. Hanna was educated at the Dominican Convent on Eccles street in Dublin and at St Mary University’s College for Women, established by the Dominicans in 1893. She received her BA from the Royal University of Ireland in 1899 and later a Master of Arts.

She then became a teacher in Rathmines. When she and her husband Francis got married in 1903, they wore their graduation gowns instead of the traditional wedding gown and suit, indicating the importance they both placed on their education. They were a modern couple, each taking their spouses’ surname to create the joint surname of Sheehy-Skeffington. There is no photograph of their wedding day in this book but there are many more evocative images of Hanna over the course of her life.

Francis was a strong supporter of women’s suffrage and he was one of the editors of the Irish Citizen, the suffrage newspaper, until his untimely death. The book includes copies of articles written by Hanna to the Irish Citizen, mostly on suffrage and nationalist matters but also on diverse topics such as women’s employment during the First World War.

It collects together articles Hanna wrote for many other newspapers and journals over the course of her career. It includes for example, her letter to the Irish Independent in May 1914, criticising the establishment of the Irishwomen’s Council (later known as Cumann na mBan), describing it as ‘an animated collecting box’. The thematic structure allows one to trace the evolution of her opinions on political issues over time.

The section on Easter week and the death of Francis is particularly moving. It comprises a copy of a lecture delivered by Hanna in the USA and published at the time in pamphlet form as British militarism as I have known it. Ward includes with the original text copies of the forwards that Hanna wrote for both the 1936 and 1946 editions.

Reflecting on the murder of Francis in 1946, she concluded that it was the British military and government’s attempted cover up of the murder which ‘damns beyond redemption the whole apparatus of British imperialism’.

Hanna said of her husband Francis’s murder in1916 that the British military and government’s attempted cover up of the murder ‘damns beyond redemption the whole apparatus of British imperialism’.

She describes in cool dispassionate detail the execution of Francis and of hearing the news of his death: ‘he told me he had seen my husband’s dead body with several others in the mortuary’. The trauma is more evident when she describes the confiscation of her letters from her husband during the raid on her house later in Easter week: ‘most of my most cherished possessions have never been returned’.

Another noteworthy source for scholars of the Irish revolution is Hanna’s account of her tour of the USA in 1917 and 1918, first published in 1919. Hanna spoke at more than 250 meetings in the USA, mobilising support for the Irish republican cause. Hanna’s granddaughter Micheline Sheehy-Skeffington, an academic and activist, recreated parts of this tour in 2017.

While the book as a whole will be of interest to many, individual chapters have much to offer. For example, the section on the War of Independence and the response to the Treaty provides another perspective on those years of political turmoil, highlighting the atrocities committed by the Black and Tans against women and children, and bringing attention to the role of women voters in the 1922 election.

Many of us are more familiar with Hanna’s role in the suffrage movement and as the tragic widow of Francis Sheehy-Skeffington. Her life after the founding of the Free State is less well-known but no less interesting.

Her articles outlining her opposition to the conservative policies of the Irish Free State, together with documents relating to the Women’s International League for Peace and Freedom Congress, held in Ireland in 1926, are instructive reminders of ongoing female activism during the early decades of the Free State.

Sheehy Skeffington helped to organise the Women’s International League for Peace and Freedom Congress, held in Ireland in 1926

Writing in the Irish World in August 1926 Hanna described how the Congress threw a ‘flood of light and truth upon conditions in Ireland, such as no counter-camouflage on the part of the Free State could obscure or avert. At last informed and representative women from the world outside were able to penetrate our gloom’. How often does this international feminist congress feature in accounts of 1920s Ireland?

The chapter on feminist reflections and fightback in the 1930s further demonstrates Hanna’s continuing activism and her opposition to the Catholic Church influenced policies of the Free State government. She was involved in protesting the 1937 constitution with the Women’s Graduate Union.

Hanna was not an insular thinker however; her concern with the rise of fascism and militarism internationally is very evident in this section. She visited women’s congresses across Europe and in the USA, seeking to form internationalist connections and to find what Ireland could learn from their women’s movements.

Later chapters in the book include Hanna’s account of her memories of Constance Markievicz after Markievicz’s death in 1927, and her reflections on other feminist colleagues such as Jennie Wyse Power and Sarah Harrison following their deaths in the 1940s. There are also somewhat eclectic chapters such as Hanna’s correspondence with Sean O’Casey over the play The Plough and the Stars, her account of travels in Europe in the 1920s, book and theatre reviews and inclusion of obituaries of Hanna published in various newspapers in 1946.

Overall this is an exceptionally valuable book, beautifully produced by UCD Press.

Occasionally the thematic organisation can be jarring. The chapter on prison experiences includes accounts of her imprisonment in 1912 and 1913 for militant suffrage activity, and in 1918 for opposing the British government’s refusal to let her re-enter Ireland; but also, articles regarding her imprisonment in Armagh Jail in 1933.

On that occasion, she was imprisoned for defying a barring order against speaking in support of republican women prisoners in Northern Ireland. Given that this chapter follows one on her feminist activism in the 1930s, the return to the suffrage campaign of 1912 seems somewhat out of place. It also would have been helpful to have had a list of the documents used in each chapter included at the start. As always footnotes are preferable to endnotes, particularly for a book of this length, but few publishers seem to agree.

These are small quibbles however and overall this is an exceptionally valuable book, beautifully produced by UCD Press, which will become a standard text to own for those interested in the role of women in society, the history of feminist activism, and the history of the Irish revolution and the Free State. The very extensive array of primary documents will be very helpful for use in teaching and will hopefully inspire future research projects.