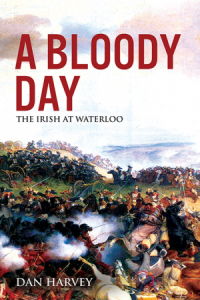 A Bloody Day – The Irish At Waterloo by Dan Harvey

“The overall extent of the casualties on all sides was staggering, the Irish suffering severely.”

In his book A Bloody Day – The Irish At Waterloo, Dan Harvey estimates that about thirty per cent of the total British army were soldiers hailing from Ireland. That figure included three Irish regiments, the 27th (Inniskilling) Regiment of Foot, the 6th (Inniskilling) Dragoons and the 18th (King’s Irish) Hussars while the 1st Regiment of Foot and the 32nd Foot also contained substantial Irish numbers. Not surprisingly then, Irish casualties were equally substantial, so many in fact that a subscription fund for the families of the dead was extremely well supported in Ireland.

Dan Harvey estimates that about thirty per cent of the total British army were soldiers hailing from Ireland.

Despite this significant involvement in one of the most celebrated battles in world history, Irish participation at Waterloo has only been moderately investigated or celebrated. According to the author, this contribution “is a debt that has neither been recognised nor repaid.” In A Bloody Day, Dan Harvey seeks to repay that debt by focusing entirely on the Irish soldiers who fought with distinction at the Battle of Waterloo.

In one of the strongest sections of the book, Harvey highlights the impressive contribution of the Irish regiment, the 27th Foot, “one of the few British army units memorialised on the battlefield of Waterloo”. The 27th withstood a brutal French frontal assault and in the process saved Wellington’s right flank. The regiment suffered badly as a result with 493 men killed or injured out of a total of just 747 soldiers.

So many officers were put out of commission indeed that “much of the unit was eventually commanded by its non-commissioned officers.” Still, their regimental spirit refused to be broken even when a nearby regiment offered the temporary services of some officers. The 27th’s Major Hare refused the loan, saying “the sergeants liked to command the companies, and I would be loathe to deprive them of such honour”. Their sacrifice didn’t go unnoticed however. After the battle Wellington admitted that the 27th “saved my line, they saved my battle” while Napoleon averred that he had never seen courage “to equal the stubborn bravery of the regiment with castles in their caps”.

At its heart though, A Bloody Day is more about the individual Irish soldiers at the Battle of Waterloo and Harvey highlights all the Irish or Ireland-related figures who contributed meaningfully to the battle ranging from the Duke of Wellington to the lowliest private. The author confidently and not entirely convincingly asserts that the Duke’s “Irishness is not in question” and states that Wellington, as part of the Ascendency class in Ireland, would have regarded himself as both English and Irish. Despite Wellington’s infamous description of his soldiers as the “scum of the earth”, Harvey absolves the Iron Duke by using the often-omitted follow up line, “it is really wonderful that we should have made them the fine fellows they are.”

However, Wellington is only one of many Irish soldiers from all ranks who distinguished themselves at Waterloo. For instance, Corporal James Graham from Clones in Monaghan was called ‘the bravest of the brave’ and elected as the “most valorous NCO at the battle of Waterloo” by the Duke of Wellington for closing the gates on the advancing French at Hougoumont Farm; a crucial action which may have decided the battle. There is now a commemorative plaque for Graham at the Royal Hospital Kilmainham.

The sheer variety of Irish contributions to the Battle of Waterloo found on the pages of this book is impressive but the books suffers from a certain narrative incoherence.

Harvey also picks out Captain Edward Kelly from Portarlington, latterly nicknamed ‘Waterloo Kelly’ who became the subject of popular prints and drawings depicting his bravery in unhorsing a French cavalry colonel. Kelly used his Irish experiences to describe the fighting, “Donnybrook Fair was nothing to the fight we had here…there was a great number of wigs on the green”. Also included in the Irish contribution to Waterloo were two Ponsonbys: Major General Sir William Ponsonby “the most high-profile Irish fatality of the campaign” killed by French lancers and Lieutenant Colonel Frederick Ponsonby who survived the fight despite being wounded six times, suffering a punctured lung and lying wounded for eighteen hours on the field of battle.

Some of the Irish individuals cited in A Bloody Day were less involved in the fighting but retain the interest of the reader nonetheless. Lieutenant John Molloy was rumoured to be the illegitimate grandson of King George III while the Irish painter Thomas Story was one of the first artists to sketch the battlefield carnage in the immediate aftermath. Lieutenant Colonel John Dawson, 2nd Earl of Portarlington from Emo Court in Laois, was infamously “not where his duty required him to be” when the fighting started.

He was rumoured to be either ill, not woken in time by his servant or too busy enjoying himself in the fleshpots of Brussels. Whatever the reason for his delayed entry into the fighting and despite acquitting himself bravely when he finally arrived on the field, Dawson’s reputation was forever stained in the eyes of his contemporaries. There’s even a passing mention of the small number of Irish soldiers who fought on the French side and the man thought to be the last survivor of the Battle of Waterloo, a “Maurice Shea from County Kerry” who died at the venerable old age of ninety-seven in 1892.

These Irish individuals are both A Bloody Day’s strength and weakness. The sheer variety of Irish contributions to the Battle of Waterloo found on the pages of this book is impressive. However, with no common themes to draw their compelling accounts together other than their mere Irishness, a certain narrative incoherence results. Eventually this listing of individuals becomes an obstacle in itself to the reader’s understanding of the battle itself. While there are some gripping battle descriptions as quoted from accounts written by Irish soldiers, there is very little context provided other than simple maps. Also, at times unnecessary diversions into contemporary military tactics or weaponry halt the narrative dead in its tracks.

As Dan Harvey rightly emphasises, the Irish were significant contributors to Wellington’s victory at Waterloo, something that has been largely forgotten in recent years. This imbalance is something which A Bloody Day has at last begun to redress.

The Battle of Rorke’s Drift in 1879 is without doubt one of the most celebrated military actions in the history of the British Empire, a distinction not unconnected to the repeated showing of the film Zulu on terrestrial television. This Anglo-Zulu clash has not been short of non-fiction accounts of the battle either. Dan Harvey now adds to that ever-growing book pile with A Bloody Night – The Irish At Rorke’s Drift, dedicating it “to the ‘Forgotten Irish’ who fought, bled and died”, all part of an “overall significant Irish presence, all central to this spectacular story.”

At Rorke’s Drift less than 150 British soldiers held off an attack by over 3,000 Zulus

Before he details the Irish individuals at the heart of the action at this famous battle, Harvey describes what happened at the Battle of Isandlwana, an important first stop as it has a huge bearing on the subsequent commemoration of Rorke’s Drift. A British expeditionary force infected with what British historian Saul David has described as a “dangerous mixture of self-confidence and contempt for their foes” was destroyed by a vastly bigger force of Zulus at Isandlwana with 1,350 of the original force of 1,750 killed. Harvey plucks out the brave actions of Dubliner Lieutenant Nevill Coghill from one of the greatest ever British military disasters for saving his regimental colours from the Zulus. Coghill was posthumously awarded the Victoria Cross.

While the heroic defence of the tiny mission station at Rorke’s Drift was undoubtedly a heroic action, it is difficult to justify fully the eleven Victoria Crosses won by its defenders, more than for any single battle before or since. Yet it was a godsend for both military and political authorities in Britain and was seized upon as a useful distraction from the dispiriting effect that the Battle of Isandlwana would have had on British public opinion. The disaster at Isandlwana in effect gave birth to the heroic narrative of Rorke’s Drift.

It was men left behind by the force soon to be routed at Isandlwana that fought at the Battle of Rorke’s Drift. This small British garrison, many of whom were sick or wounded, withstood repeated attacks by up to 3,000 Zulu warriors for twelve hours. Harvey estimates that this garrison comprised 30 Irishmen out of the 137 regular army personnel, (there were also 120 men from the Natal Native Contingent); an unsurprising proportion when you consider that at the time roughly “twenty-two per cent of the British army were Irish.”

A Bloody Night – The Irish At Rorke’s Drift is a short sharp account of the battle written by “a soldier telling a soldiers’ story”.

To agree with those numbers however, you must accept Harvey’s definition of ‘Irishness’. According to Harvey that would include “native Irish-born, others born of Irish parents in Britain, and those with Irish names and connections”. Thus, by the author’s premise, two of the leading figures in the Battle of Rorke’s Drift, Lieutenant Gonville Bromhead (“three of his grandparents were Irish.”) and James Dalton (“Irish parents James and Susan Dalton”) were both Irish.

Although played as an English hero by Michael Caine in the film Zulu, Gonville Bromhead was described by a senior officer before the fighting as “a capital fellow at everything except soldiering”. Harvey rightly sees Commissary Dalton as the real hero of the battle; Dalton persuaded Chard and Bromhead to stand fast at Rorke’s Drift rather than retreating as well as organising the defensive positions and constantly inspiring his comrades with his personal bravery. Surprisingly he was only awarded a Victoria Cross after intensive lobbying by the British press.

Whatever your opinion about the nationality of Dalton and Gonville Bromhead, there are enough soldiers born in Ireland to make this slim volume an interesting read. The first Irishman killed was Louis Byrne “a civilian volunteer serving as a store man with the Commissary Department” while Harvey highlights the bravery of ‘The Quiet Sergeant, Henry Gallagher from Killenaule in Tipperary.

Quiet too was Private Minehan who “found himself unable to speak for a time after the event, communicating his skewering of the Zulu by the cattle-kraal’s inner stone wall by gesture alone.” In addition, Assistant Commissary Walter Dunne’s letter provides a vivid description of the event. In the letter he recalled: “They drove our fellows out of the Hospital, killed the patients and burned the place. They made several attempts to storm us” but they “were driven back each time” and “in the morning they retreated leaving 351 dead bodies”.

Usefully Harvey has included Dunne’s letter as well as Chard’s more detailed report to Queen Victoria in the appendices of A Bloody Night. Interesting too is the author’s summary of what happened next to some of the key participants. Many of the lower-rank Victoria Cross winners were left forgotten and impoverished when the media circus moved on, including James Dalton who died “a broken man”. A Bloody Night – The Irish At Rorke’s Drift is a short sharp account of the battle written by “a soldier telling a soldiers’ story”.

2 Responses to "Book Reviews: A Bloody Day and Bloody Night, The Irish at Waterloo and Rorke’s Drift"