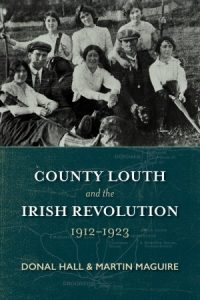 This book is a collection of article on the events surrounding the independence struggle and partition and of Ireland from 1912 to 1923, as they affected the small but strategically important County of Louth. Louth contained two substantial ports, railway hub and, with the partition of Ireland, made ‘hard’ in 1922’ became the main transit point between Dublin and Belfast. Its importance in short, outweighed its size.

Local studies of what historians now term ‘the Irish Revolution’ have become common over the last ten or so years and they often provide a valuable insight into local events in that pivotal period. Taking the county as the area of study has, in truth, both advantages and disadvantages.

Its strength is that, many local administrative organs were run on the basis of county lines, so the story of the takeover of political power by Sinn Fein in 1918-1920 and of the local Volunteer or IRA units can often be told best on a county basis. On top of that, mainly because of loyalties engendered by GAA sporting affiliations, such an approach probably best engages the general Irish public.

The weakness of the approach is that Irish counties vary widely in size and population. So for example, comparing County Cork, a huge land area and with a population of nearly 400,000, with Louth, the smallest County in Ireland, with a population in 1911 of just 63,000, presents some problems, certainly in terms of comparing statistics of mobilisation and revolutionary violence. On top of that, Louth’s IRA units were actually separated in 1921, with those around Dundalk being incorporated into the Fourth Northern Division and those around Drogheda joining the Midland Division.

That caveat aside, this book is a very interesting collection of research by local historians into Louth during the revolutionary period. In a summary opening chapter, Donal Hall sums up the events of the independence struggle in the county. The Volunteers were mobilised for the insurrection of Easter 1916, but in the absence of clear orders, enough arms or clear objectives, accomplished little as fighting raged in Dublin.

Subsequently as elsewhere in Ireland, the impact of the Rising and its repression, resistance to conscription for the British Army in the Great War and other factors led to the growth of Sinn Fein. Volunteers and activists from Louth were energised fighting a by-election South Armagh, which they ultimately lost to the rival nationalist Redmondites. The following year though, they swept the boards locally and nationally at the General Election of 1918. And in 1920, again following the nationwide pattern, took over the Louth County and Town Councils in local elections.

However, as a number of contributors make clear, there remained many who were not supportive of militant republicanism, including the local newspaper the Dundalk Democrat and much of the local Catholic clergy.

Though the subsequent guerrilla war that we now term the Irish War of Independence was not waged with particularly great intensity in Louth (indeed, IRA men from neighbouring Armagh and Down complained they had to do all the fighting that ‘Louth men should have done’), it did develop into a nasty cycle of attacks and reprisals, among the victims being two Drogheda aldermen who were summarily executed by the Black and Tans.

Brendan MacAvinue shows how the Royal Irish Constabulary in County Louth went from a more or less normal police force to, with arrival of the Black and Tans and Auxiliaries, a feared counter-insurgency force, to finally being replaced as police force by bodies like the Irish Republican Police and even a local body, the North Louth police before the new Civic Guard or, as they were soon renamed the Garda Siochana, took over policing in 1923.

The partition of Ireland turned Louth into a border county. The Fourth Northern Division of the IRA under Frank Aiken and based in Dundalk, fought a bitter, undeclared ‘border war’ with the Ulster Special Constabulary in the newly formed Northern Ireland. As Conor McNamara details in his chapter, this rapidly involved sectarian killings on both sides, culminating in Frank Aiken’s men killing six Protestants around the village of Altanaveigh in June 1922, in reprisal for the murder of local Catholics by the ‘Specials’.

The question of sectarianism in the border region, which, with violence raging against Catholic in Belfast, rose almost to boiling point in early 1922, is probably one of those areas that would benefit from a local study outside of purely county boundaries. The question is certainly a complex one. Catholics and nationalists expected local Protestants to condemn violence against Catholics in the North (which they did for the most part) but that did not stop threatening notices to kill Protestants or burn their property appearing in retaliation for the ‘pogrom’ in Belfast. Occasionally, these were acted on by parties unknown. To complicate things further, Altnaveigh aside, the IRA was usually involved in stopping sectarian attacks on or intimidation in Louth.

Things may have got bloodier along the border in mid 1922. Only the outbreak of Civil War in the south over the Anglo-Irish Treaty brought an unexpected halt to the ‘border war’. Aiken was briefly imprisoned by the pro-Treaty authorities before escaping and both Dundalk and Drogheda saw pitched battles before the authority of the Dublin government was finally confirmed with their victory in the Civil War in May 1923. Mal Martin’s Chapter on the Civil War in Drogheda is illuminating while Don Johnson focuses on the assassination of pro-Treaty officer in Dundalk in late 1922.

There is an interesting chapters on the role of Cumann na mBan, the republican women’s group by Ailbhe Rogers, who has also contributed a piece on Louth in1916 to the Irish Story.

Martin Maguire and Peter Rigney both show that the revolutionary period was about more than men with guns. Maguire shows how the labour movement in Louth was born in these years also and how they contributed to the independence struggle with strikes and boycotts, often without authorisation from Sinn Fein, as well as battling for higher wages. In a similar vein, Peter Rigney details how the railway workers in Louth joined on their own initiative, a boycott on carrying British military during the War of Independence.

For me the most interesting single chapter was that by Jean Young on the ‘Big House’ in County Louth during the Irish Revolution. This is a topic we have covered here at the Irish Story and revisited with new research in 2015 and Jean Young beings to the topic a well-researched and nuanced contribution to the topic.

She chronicles the decline of the old big landlords in the area before the revolutionary period. This was due to the Land Acts, under which many tenants availed of government loans to buy their holdings, losses of many men from the Anglo Irish landed class in the Great War and other factors. This was before the mansions of the old Anglo Irish landed class were ever hit by Republican burnings during the War of Independence and Civil War. She investigates the burnings thoroughly and finds that although local agrarian grievances may have played a part in them, they were essentially reprisals carried out on the orders of the IRA command for the executions of their men or for fear the Big Houses would be garrisoned by hostile forces.

While the victims of the burnings sometimes assumed that their property was torched for sectarian reasons, in fact, according to Young, IRA men involved in the burnings declared to the owners that they cared nothing about religion but only about the politics – be they ‘imperialist’ or pro-Treaty’ of their targets. If sectarianism is part of the story of the Irish Revolution in Louth, it does not mean it was the central part or the main motivating factor in the IRA arson campaign of the Civil War. Indeed one of the Big Houses burned in Louth was Catholic owned while apolitical Protestant landowners were left alone.

In conclusion, if I have some doubts about the county by county approach to research on the Irish Revolution, this book still contains some very interesting contributions to the formative decade in twentieth century Irish history.