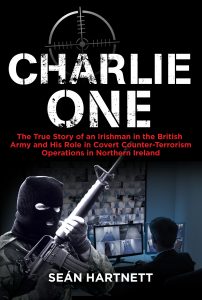 Special ops memoirs can be a crapshoot in terms of which ones to take seriously. For every genuine case like Andy McNab on the shelves, there are fakers and fantasists like Philip Anthony Sessarego, taking up space. That the UK Ministry of Defence asked the publishers Merrion Press to halt the distribution of this book over the sensitive material inside would suggest its author, Seán Hartnett, is the real deal.

The UK Ministry of Defence asked the publishers Merrion Press to halt the distribution of this book on undercover British Army intelligence work, by former agent, Seán Hartnett.

Certainly there is enough here to argue that the term ‘Peace Process’, while not a misnomer, does not entirely cover the whole picture. With the danger of terrorism in Northern Ireland subdued but ever present, the British Government invested, and clearly continues to do so, a considerable amount of resources, both technological and human, such as the covert Joint Communications Unit Northern Ireland (JCU-NI), also known as ‘the Det.’

The unit’s emblem is Argus, the hundred-eyed monster of classical myth, and in case we ever doubt the appropriateness of that choice of symbol, Hartnett gives us a sample of his working day that would not be out of place in a Jason Bourne movie:

Sitting in front of a vast wall of TV monitors in the operations room, fed by signals from this powerful network, the operations officer (Opso) could track a vehicle or individual in real time from any point in the city to any other point, or manoeuvre his operators like chess pieces around the city, and indeed all the way down to the so-called ‘bandit country’ of South Armagh and Tyrone. As they dropped out on one camera they would be picked up by another, or by an operator, all the whole oblivious to the level of surveillance they were under.

After a stint in the regular British Army, Hartnett was retrained as an electronics expert and assigned to ‘North Det’, responsible for covering the Republican hotbed of Derry. Given responsibility for the myriad of hidden cameras keeping watch over suspects and designated areas, his was unusual work compared to what he had done before as a common squaddie.

Hartnett, from Cork, served in the British Army and and was later assigned the ‘Det’ or intelligence corps in Northern Ireland.

But then, Hartnett was an unusual agent for Queen and Country in the first place, being a Cork native with republican connections of his own. An uncomfortable moment for him was seeing on the HQ walls framed photographs and newspaper clippings of the SAS ambush on a PIRA squad at Loughgall in 1987 in which a cousin of an aunt of his had been killed.

Hartnett later learned some of the inside details of Loughgall from an older colleague over the course of a few drinks. Ruminations on past events are interspersed with counter-terrorism work in the present day, suggesting that while much has changed over the years, many of the underlying causes have not.

For all the technological sophistication JCU-NI had at its disposal, Hartnett makes it clear that Murphy’s Law of ‘what can go wrong will go wrong’ was never far away. That North Det did not officially exist on paper could be a problem as well as a necessity, such as when JCU-NI assisted in the PSNI arrest of four men on their way to attack a police patrol with a rocket launcher. The detainees were to be acquitted of the charges of Real IRA membership and conspiracy to murder partly due to the unexplained references, in the course of the trial, to military personnel that had not been included in the PSNI arrest notes.

JCU-NI could at least claim a win in that instance in the saving of lives. But, in August 2002, the team operatives were faced with the dilemma of whether to continue pursuing their latest ‘Charlie One’ (the codename for whoever was their current quarry, with ‘Charlie Two’ and onwards added as appropriate) or the second car that some of the other ‘dissident’ Republicans he had been travelling with had switched to and were driving in a different direction.

The officer-in-charge went with his gut feeling and made the call to continue focusing on their ‘Charlie One.’ After a seemingly uneventful day of yet more surveillance, the team learnt that a civilian construction worker, David Caldwell, had been killed by a booby-trapped lunchbox. The explosives had originated from the second car that JCU-NI had opted not to follow.

It is an easy read, although, given the subject matter, not always easy to read. It is also, unfortunately, a very relevant read

“Until now, no one had any knowledge of North Det’s involvement in the incident,” Hartnett concludes sombrely. “David Caldwell’s daughter, Gillian McFaul, has been looking for answers ever since that day. I hope this provides some.”

However, the book offers more questions than answers. In keeping with the clandestine nature of espionage, where little can be said, only exposed (the efforts of the Ministry of Defence towards this book being a case in point), the work of North Det often appears more defined by its failures rather than successes.

Or maybe Hartnett is simply jaded. Upon discharge from the British Army, Hartnett was diagnosed with PTSD, and wrote this book as a form of therapy. It is an easy read, although, given the subject matter, not always easy to read. It is also, unfortunately, a very relevant read.