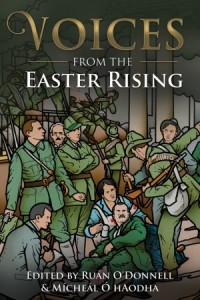 Ruán O’Donnell and Micheál O hAodha’s Voices from the Easter Rising brings twenty eight first-hand account of the 1916 Rising together in one place. The book offers a wide variety of perspectives on the conflict from those that experienced it and offers an illuminating insight into the events of the Rising and particularly its effects on the people of Dublin and beyond.

The book offers a wide variety of perspectives on the 1916 from eyewitness accounts.

The vast bulk of these accounts are from extracted from the Óghlaigh na hÉireann’s Bureau of Military History Archives. Between 1947 and 1959 the Irish Government began to collect primary accounts of Ireland’s struggle for independence. These were sealed until all witnesses who gave accounts were deceased in 2003.

Now they provide a hugely important resource for historians seeking to understand the events that led to the birth of the Irish state. While the archives are now largely available online at http://www.bureauofmilitaryhistory.ie/ by their nature they are largely inaccessible to most readers. Voices from the Easter Rising succeeds in bringing these vivid accounts of Easter 1916 to an everyday audience in an easily accessible format.

New sources like the Bureau of Military History archive change the way we look at the Rising.

Much of the commonly read histories of 1916 were written before these archives were made public. The over-reliance of much of 1916’s historiography on the heavily biased Dublin print media has long been evident. It is clear from the accounts presented in this volume that certain prevailing conceptions of the Rising could benefit from fresh evaluation.

It is notable that British General Harry de Courcy Wheeler notes the “tremendous cheers “that greeted the rebels after their arrest and that it was “perfectly plain that all the admiration was for those who had surrendered”. The commonly accepted idea that the Rising was met with nothing with opprobrium before a mass attitudinal change when the leaders were executed. These accounts, which also note the support for the British forces by various Dublin civilians throughout the Rising, suggest a more complex and nuanced pre-1916 attitude towards the national struggle.

These accounts also vividly portray the sheer chaos of armed conflict. The reader is told of confused soldiers accidently shooting themselves dead; of rebels who may or may not have been killed by  friendly fire; and the sheer confusion of those involved. The dense fog of war is widely apparent particular in the accounts dealing with the close of hostilities and the communication of the decision for the rebels to surrender.

The immense confusion of the conflict, however, does at times overpower much of the narrative value of these accounts, particularly as some of the accounts chosen for publication are those of witnesses whose involvement in the Rising was somewhat tangential.

Without significant knowledge of the specific locations and timeline involved in the Rising, it would be difficulty for the reader to follow many of the accounts and to form a picture of the Rising itself. The volume would majorly benefit from the inclusion of a map or two and an overview of the Rising’s events. As presented, the volume is best read in conjunction with broader accounts.