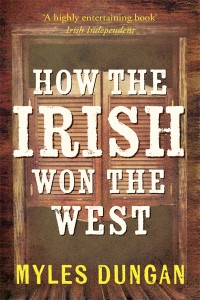 From the title, with its slightly tongue-in-cheek reference to classic western movies onwards, Myles Dungan sets the reader up for a very enjoyable romp through the tumbleweed in this history of the Irish in the American West.

This 2016 revision of the initial 2006 edition with subsequent additions is a gentle debunking of classic Western tropes with the author taking some pot shots at the iconic imagery which we all associate with the Cowboys and Indians of Hollywood fare. This minor deflating of the western legend is always complemented by the full telling of the legend; when in doubt the author doesn’t hesitate to print that legend.

This 2016 revision of the initial 2006 edition consists of fascinating individual stories rather than an in-depth thematic exploration,

A book of fascinating individual stories rather than an in-depth thematic exploration, many of the Irish men and women that the author picks out are frankly worthy of their own movies. There are gun-toting toffs, prostitutes with hearts of gold, ruthless businessmen, quick-on-the-draw cowboys, Indian-scalping soldiers, pioneering mountain men as well as famous artists and writers; all Irish and all caught up in the story of the American West.

This focus on characters and individuals has real merits when you’re describing people as diverse and compelling as Oscar Wilde and Lola Montez. Dungan is also insistent on cutting away the tired old mythology of white and black hats. For example, he cuts the movie character John Chisum as portrayed by John Wayne down to size by detailing the real historical figure who was “small in stature…balding… [with a] moustache, and his most notable physical attribute were his ears, prominent…”

That focus does mitigate however against drawing wider lessons or sketching out broader themes. The context remains very much in the background, based on secondary sources and the author has little to say on more ordinary Irish people who made the long journey to the West. These are relatively small weaknesses however when the characters drawn upon in How the Irish Won the West are so fascinating and warrant both the author’s and the readers’ attention.

Stories include that of ‘mountain man’ Thomas Fitzpatrick,

Take Thomas Fitzpatrick, born in Cavan in 1799 and, by the time he died in Washington DC, “probably the single most significant Irish-born figure” in the history of the American West and someone of whom it was said, “no man is more representative of this epoch”. While Dungan does point out the contradictions and exaggerations that somewhat inflated Fitzpatrick’s reputation, he also relishes his legend.

As a mountain man or fur trapper, Fitzpatrick helped find and then promote the so-called South Pass through the Rockies, a “more pragmatic foundation for the movement of population to California and Oregon” and a vital factor in facilitating large-scale wagon trains travelling west. He went on to become a wealthy man before becoming a comparatively enlightened Indian agent. Fitzpatrick was both the creator of a famous peace treaty with the Plains Indians at Fort Laramie and the glue that kept it together for the few years of peace that followed it.

Travellers through the western wilderness had far more failures than successes however and Dungan opines that this was a brief and overly romanticised era which “lasted barely twenty years and had produced a short-lived breed of pioneers who had progressed ‘from a cock of the walk to a smelly old relic in half a lifetime’.”

The deadly-fascinating tale of the Donner party and their increasingly desperate plight on the journey west is also given considerable space including the wretched cannibalism that their survival story entailed.

Michael Meagher, marshal of Wichita, Kansas “earned a reputation for defusing potentially dangerous situations without the use of violence and without resorting to his own gun”

The author sketches portraits of Irish White Hats like Michael Meagher, marshal of Wichita, Kansas who “earned a reputation for defusing potentially dangerous situations without the use of violence and without resorting to his own gun” as well as being the boss of Western icon Wyatt Earp. But Dungan really prefers the Black Hats, spending heavy page time on Irishmen like Dolan, Murphy, Riley and Brady as well as on the exploits of Billy the Kid who featured heavily in the gun play of the Lincoln County War in what is the longest individual section in the book.

Most of the disreputable characters described in How the Irish Won the West, however, directed their villainy towards non-white races and Dungan really doesn’t gloss over the full horror of their treatment, tin particular that of Native Indians, “In a sense, the Irish experience in the West can be seen as a laboratory experiment or an examination of Irish tolerance of other cultures when directly confronted with diversity.

The Irish were involved in the oppression of Indians and racism that discriminated against the Chinese.

In most instances the candidates can be said to have failed the exam.” James Kirker, for example, from Co Antrim who was said to have scalped 500 Apaches for the reward of $200 each, was “one of many Irishmen who had a career of murdering Indians”. Dungan is careful here to place the Irish man in his contemporary context when he claims that “in the 1840s Kirker was a hero…celebrated by a grateful populace.”

Racism against the Chinese is also explored in the stories of Denis Kearny in San Francisco with his political slogan of ‘The Chinese must go’ and his confrere Matthew Nunan who promulgated city ordinances that discriminated against the Chinese population including the shaving of the heads of all prisoners, a law aimed squarely at the hair queue particular and precious to Chinese men.

While the vast majority of the Irish people who feature in How the Irish Won the West are male, there were many Irish women who stand out, whether “gentle tamers” or “soiled doves” who earned the rewards that lay in “mining the miners”, a typical example of Dungan’s excellent eye for the telling quote.

The female equivalent of Thomas Fitzpatrick in terms of “courage, tenacity, intelligence and longevity” was Cork woman Nellie Cashman who made her fortune running boarding houses for the miners of Tombstone, Arizona and then parlayed that fortune into buying and selling claims all over the North American West.

Cashman become well known to the larger American populace however when she organised a rescue mission of hundreds of stranded and starving prospectors and earned herself the sobriquet of ‘The Angel of Cassiar” into the bargain. One newspaper paid her some highfalutin praise, “In all the vicissitudes of life she has maintained the highest self respect, but is as ambitious in her notions as Joan of Arc”.

Cashman wasn’t the only Irish woman to make her mark in the western dust. Belinda Mulrooney or the Queen of the Klondike started off providing hot-water bottles to miners before graduating to the ownership of a luxury hotel where she used the drunken claims of prospectors to buy herself many profitable mines. And what about Molly b’Damn whose beauty was so great that it sent even the famous Calamity Jane packing?

That’s only a taste though of the many and varied cast of characters in How the Irish Won the West. It would be remiss not to mention also Sir George Gore who is said to have killed hundreds of bears and thousands of buffalo or Horace Plunkett, father of the Irish farming co-operative and a Wyoming cattle farmer called “Hod”.

You can’t leave out John Ross Browne whose travel writing influenced both Mark Twain and Hermann Melville or Paul Kane, the ‘Father of Canadian Art’ or indeed Paul Boyton who “floated down the Yellowstone and Missouri rivers armed with a bugle and a knife.”

Myles Dungan does a very capable job of corralling all these stories and all these characters together and bundling them up into a coherent collection.

Finally, any mention of Irish men in the West could not omit Oscar Wilde and his celebrated tour of a part of America where “the mortality among pianists…is marvellous.” Dungan delights in puncturing another myth about Wilde pointing out that his famous response to a customs official that he had nothing to declare but his genius was “uttered out of earshot of any witnesses” and that the bon mot had “more than a whiff of retrospection about it.”

Myles Dungan does a very capable job of corralling all these stories and all these characters together and bundling them up into a coherent collection. His language is always entertaining, describing Lola Montez for example as a woman who “reinvented herself more often than an endangered chameleon” and he has a quick, knowing wit.

Due to the sheer number of Irish men and women detailed, the author can, on occasion come across as something of a purveyor of tales akin to a wild west salesman selling snake oil while the movie references and framing can be slightly overdone. However, How the Irish Won the West is a wonderful and entertaining starting point for the history reader intent on learning more about the American West and the Irish part in its exploration and settlement.