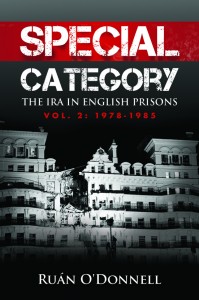 Throughout the course of Irish History jail experiences have been a factor within the Irish Republican historical narrative.

There have been Irish political prisoners in British gaols since the 1790s but perhaps the most famous were those who recorded their experiences including John Mitchell, O’Donovan Rossa, Tom Clarke, Bobby Sands and Mairead Farrell to name a few.

Despite the wealth of material available to Irish historians regarding the experience of Irish prisoners in British gaols, and their propensity to be a theatre of war, there is a sparsity secondary sources available to the reader of Irish history.

This book is the second Volume of O’Donnell’s chronicle of Provisional IRA prisoners imprisoned in England during the Northern Ireland conflict.

In 2013 Ruan O’Donnell, published Special Category: The IRA in English Prisons 1968-78. The book was a notable addition to Irish historiography and shone a light on a previously untold aspect of Irish History with reference to the experiences of Irish prisoners in British gaols. O’Donnell’s latest book, follows on from where his last ended and examines the years between 1978-1985.

Like the first volume Special Category: The IRA in English Prisons 1978-85 is a comprehensive, well researched, accessible and educational study based upon a plethora of primary sources, personal interviews and real time experiences of IRA prisoners. The stories which O’Donnell seamlessly introduces are a testament to those he writes about as he explains to the reader their real life struggles against the background of a remarkably harsh and exceedingly cruel prison system.

It is apparent to the reader that the experience of Irish Republican prisoners in England was different to that in Ireland. In this respect Special Category: Volume 2 offers a valuable historical insight which can compare the experience of prison life in England with that of Mountjoy, Port Laois, Long Kesh (later the Maze) , Armagh and Crumlin Road. The author recounts with great detail the story of the almost forgotten Wormwood Scrubs riots which took place in 1979 when the IRA staged a rooftop protest over visiting rights.

Prisoners often staged protests and attempted escape in prisons such as Wormwood Scrubs and Brixton.

The author explains the IRA escape from Brixton Prison in December of the following year, when Gerry Tuite became the first Irishman, since the beginning of the Provisional IRA campaign in 1969 to escape prison. Recalling, in exciting real time detail, how Tuite, with assistance from two non-political prisoners, Christopher Thompson and James Moody, dug a tunnel into another cell, broke through a cell wall and then scaled the prison walls to escape to freedom.

Described as ‘a master of disguise,’ despite one of the most significant police operations to find him, Tuite escaped unhindered, returning to Ireland in a decisive blow to the integrity of the prison system and a tremendous propaganda victory to the Republican movement.

An entire chapter is devoted to the experience of the Blanket protest and Hunger Strikes detailing their impact upon political prisoners in Britain and important campaigns to raise awareness of both prisoner’s experiences and British Army activities in Ireland in British towns and cities.

O’Donnell illustrates how the British government successfully outmanoeuvred the IRA in the hunger strike period.

He clarifies how political activities in England, such as rallies and protests, regarding the treatment and conditions of Irish prisoners, particularly those on hunger strike, were used to rally political support in England toward the critical situation in Ireland during the 1980 and subsequently pivotal 1981 hunger strikes.

Outlining the experiences of the blanket men and the 1980 hunger strikers O’Donnell illustrates how the British government successfully outmanoeuvred the IRA and how successive British intransigence and inflexibility with regard to the H Blocks and Armagh Gaols brought about a renewal of the hunger strike by Irish prisoners seeking political status.

Examining the impetus for the 1981 hunger strike O’Donnell introduces the reader to the characters and examines the thinking of Bobby Sands, concluding that Sands was aware of the symbolic potency of his own death. Sands, it should be noted, famously wrote in justification of his role in the hunger strike as a feature of a theatre of war with Britain whom he defined as a monster utilising a monsters army in its assault on Ireland. Prior to commencing the hunger strike Sands recalled:

I shall remember and I shall never forget how this monster took the lives of Tom Ashe, Terence MacSwiney, Michael Gaughan, Frank Stagg and Hugh Coney… tomorrow I’ll fight the monster and his devils again.’

It is evident from reading and studying the activities of Sands, which the author had done with great detail, that he had a great awareness of Irish history and Republican theory and firmly placed his prison experiences within a historical context of seeking to challenge British policy in Ireland.

While the 1981 hunger Strike is rightly seen as a pivotal moment in Irish history, the author examines the effect of the hunger strike on British based prisoners, republicans and their supporters in Britain. With great detail O’Donnell sets out to inform the reader of how, when Sands was awaiting death, on 26 April 1981, Irish Republicans Martin Coughlin, Paul Norney and Billy Armstrong staged an rooftop protest in Wormwood Scrubs.

During the hunger strike, IRA prisoners in Britain staged a rooftop protest.

The IRA members had believed that it was their duty to stand with their comrade in Ireland as ‘we felt it was our duty to do something before they let him die, rather than after.’ Similar protests took place at Long Lartin where on 4 May 1981 volunteer Gerry Cunningham supported by other IRA prisoners made for the roof of their prison in support of Sands and held out until 10 May.

The greatest strength of this book is the fact that the author engaged with many former Republican prisoners and by doing so has provided a remarkable service to history.

While the effect of Sands’ death in Ireland is widely known, Special Category: Volume 2 shines a new light onto how Irish Republican prisoners experienced news of his death in England. O’Donnell recounts in great detail how Irish Republican prisoners in England had limited knowledge of the hunger strikes in Ireland due to censorship restrictions, yet when the sad news passed through Pankhurst Prison and how in total dismay and mournful sorrow, the prisoners refused to attend work with some engaging in a three day fast in deference to their comrade.

An IRA prisoner Hugh Doherty recalled this period to be the hardest time of his imprisonment while others recalled a dark shadow menacingly passing through the Republican wings. Similar experiences are recollected with the news of the deaths of Francis Hughes, Ray McCreesh and Patsy O’Hara.

This book is a commendable addition to Irish history and is befitting to all students of the history of modern Ireland. The author has compiled an extensive volume of work which is well researched and presented in an incredibly accessible style.

The greatest strength of this book is the fact that the author engaged with many former Republican prisoners and by doing so has provided a remarkable service to history. Special Category: Volume 2 is an authoritative, comprehensive and masterly study of the modern experience of Irish political prisoners in British jails.