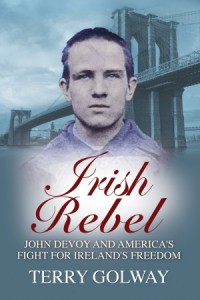 Terry Golway is a prominent US political commentator, who in this book has written a brilliantly researched and exciting account of the life of John Devoy, Fenian extraordinaire.   Originally published in 1999, Irish Rebel’s re-issuing this year by Merrion Press is more than timely.

For those interested in the Irish Revolution, but who are already feeling overloaded with 1916-centred material, the book is an excellent guide to the background and build-up to the revolutionary years in Ireland.  John Devoy is the great golden link in the chain extending from the 1848 generation of Fenians to the twentieth century; he was prominently involved in the 1867 rebellion, in 1916 and the War of Independence.   As much of Devoy’s career was spent as an activist and journalist in America, it is the case that for too long his contribution to Irish independence from an American perspective has been overlooked.

Born of poor background in rural Kill, Co. Kildare in 1842, John Devoy’s father moved, while the family was still young to Dublin, where he established a successful business.  Both his parent’s families had connections with the failed 1848 revolt, and despite clear Fenian sympathies, Devoy’s father did his best to discourage his son from political involvement.  In spite of parental disapproval, it is interesting how father and son remained in close touch, even after John’s move to the US, and also how he kept his father informed of many of the IRB and Clan na Gael’s goings on in America.

Devoy had severe difficulties with his eyesight from a young age, and this caused problems for him in school, at a time when these issues were less understood.  Expelled on one occasion from the O’Connell School for pushing a teacher, after refusing to submit to corporal punishment, he was nevertheless marked out by several other teachers in the same school for his intelligence and potential.

On joining the IRB, he fell out with his father and left Ireland to join the French Foreign Legion, before ending up in America.

On joining the IRB, he fell out with his father and left Ireland to join the French Foreign Legion.  He served in the Maghreb and having gained a good military grounding he returned to Kildare and took a job in a local brewery.  On his return, James Stephens gave Devoy the task of recruiting new IRB members from amongst the British garrisons in Ireland, a difficult task, but one that he proved adept at.  He was in prison during the failed Fenian rebellion of 1867.

His involvement was obvious however and when brought to trial he was sentenced to 15 years imprisonment with hard labour.  Given early release in 1871, he then moved to New York, where he became deeply-involved in the IRBs transatlantic counterpart Clan na Gael.  He was the principal architect of the spectacular Catalpa rescue that saw Irish prisoners liberated from Western Australia.  Golway’s account here is particularly exciting, as one follows the rescue from its planning stage on the American east coast, to the eventual landing of the Catalpa months later on the far side of the continent.

It is on the American side of things that Golway’s book is especially strong.  Devoy spent almost fifty years of his life in America, and his influence grew considerably after 1903 when he became editor of the Gaelic American.  Of great interest is Golway’s thorough account of the personalities and clashes within the Irish American community and its effects on the burgeoning Fenian movement.

The considerable Irish contribution to the Union Army during the American Civil War meant that successive occupiers of the White House showed sympathy for the cause of Irish independence and turned a blind-eye to much Fenian activity, allowing Clan na Gael and other bodies to grow and gain influence.  Their growth proved a two-edged sword however, as strong personalities and splits emerged, as it became clear that Clan na Gael was used, partially at least, as a vehicle by some to attain political influence within America itself.  Devoy successfully navigated most of these unspoken power struggles with cleverness and tact, never losing sight of the primary cause.

Devoy ran Clan na Gael in America for many years, backing the Easter Rising and the IRA but supporting the Anglo-Irish Treaty of 1921.

In the build up to the Easter Rising, Devoy grew close to Roger Casement especially and encouraged him to go to Germany and recruit for the IRB amongst Irishmen fighting with the British Army there.  When he heard of the Rising, he made an unsuccessful attempt to reach Ireland so that he could take part.

During the War of Independence he saw to it that a steady stream of money and arms were sent to the IRA.   He used all of his influence in the New York press to advance the cause of Sinn Féin.  He accompanied Eamon de Valera as President of the Irish Republic on his fundraising tour of the US, but Dev’s much-publicised visit exposed old wounds; between Devoy and his ally Judge Daniel Cohalan and their detractors within Irish America’s Fenian community. It led to an unfortunate and unprecedented dispute.  Devoy backed the signing of the Anglo-Treaty and was warmly welcomed by the Free State when he returned in 1924.  He died in 1928 and was laid to rest in Glasnevin.

Golway’s book is one that can be added to the growing corpus of work on Fenian history.  It is however unique for the insight it gives into Devoy’s activities in the United States and the effects that the Irish American community and the long struggle for Irish independence had upon internal politics in the United States in the nineteenth century.  Whatever one’s personal views on the revolutionary era now being commemorated, reading Terry Golway’s book makes it clear that John Devoy was one man who sacrificed much for Ireland.