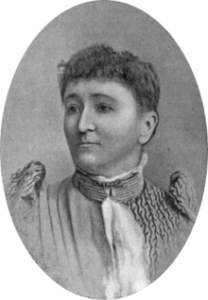 As a young woman, who has a keen and passionate interest in literature and Irish history, I am always looking for a way to join the two together. With that in mind, I struck gold on one cold winters evening, when I found the solution to my problem in the comfort of my own home – a prolific Irish female author of the nineteenth century.

When flicking through my local town’s history journal: ‘Rosscarbery Past and Present Volume 13’, I discovered an article all about a female author named Margaret Wolfe Hungerford. As luck would have it, not only was she an Irish author, but I was astonished to learn that both Mrs Margaret Wolfe Hungerford and I, share the same town land, with just 161 years of a difference. So close that we could have been next door neighbours. Surely this was the best way of combining my love of literature and history together for my ideal world? With a little bit more research I was able to get to know more about her.

It was the year 1855 and the Great Famine had been over for less than a decade. Three years later James Stephens would found the Irish Republican Brotherhood in Paris. In the same Rosscarbery, Jeremiah O’Donovan Rossa in 1856  founded the Phoenix National and Literary Society, the aim of which was “the liberation of Ireland by force of arms However, these Irish heroes are not the only person worth talking about.

Margaret Wolfe Hamilton was born in Rosscarbery, County Cork, in 1855, the eldest daughter of a Church of Ireland minister

Margaret Wolfe Hamilton was born in Rosscarbery, County Cork, in 1855, the eldest daughter of a Church of Ireland minister, Canon Fitzjohn Stannus Hamilton. Canon Hamilton, whose family came from Dunboyne near Dublin, was the rector and vicar choral of St.Fachtna’s cathedral. Margaret would have had quite a comfortable life style, as being the daughter of a well recognised religious figure came with some perks, such as access to an education, which by no means all girls her age had. Margaret went to a local school where her talent of storytelling quickly showed and she won compositions prizes with stories initially written to entertain her friends.

Margaret moved to Dublin when she left school. However, the reason for this move is unknown. Perhaps she moved so that she could give her a writing career a stronger platform; as Dublin was believed to have better opportunities than Cork, especially in terms of literature. She first married Edward Argles, a Dublin solicitor at the early age of seventeen. Marriage at seventeen in today’s society is considered rare but according the University of Glasgow, a girl could get married as early as twelve years old in 1800s.

She was married at just 17 years of age.

Soon after her marriage Margaret had three daughters: Daisy, Reine and Elsie. It is possible that the early marriage was due to pregnancy. Unfortunately luck was not with Margaret and her husband died in Canada for reasons unknown when her oldest child Daisy was about six years old.

This left Margaret, a twenty three year old widow to raise three young children while at the same time trying to develop her writing career.

With that in mind, Margaret returned to her home, Milleen House in Rosscarbery, County Cork where she met Thomas Henry Hungerford, who lived at Cahermore House – situated just around the corner from where she lived. Thomas Henry came from the well known family: The Hungerfords. They were the landlords of the townland at that time so it can only be assumed that at some previous stage, their families conversed; maybe as friendly neighbours or perhaps just for business.

Thomas Henry was the eldest son of Henry Jones Hungerford and Mary Boon Couper. Thomas Henry was born December 6th, 1858. As the oldest son, he was trained for the army, but when the time came for him to buy his commission his father refused to give up the money for it. When the Boer War in 1881 came along, Thomas Henry enlisted however he was contacted by his mother who sent for him to return home at once as his father was behaving badly. He rushed home at once only to find his mother had lied and only wanted him home to marry a very rich young lady, Miss Townsend of Derry House. Henry refused to marry her and she later went on to marry George Bernard Shaw.

It is unknown for how long Thomas Henry and Margaret courted but we do know that they had a secret marriage ceremony in London, while there on a business trip for Margaret to meet with publishers. Thomas Henry’s mother was still very annoyed over her son’s failure to marry Miss Townsend and that he had chosen a widow with three children and who had a career as a writer, instead. Perhaps this is what drove the couple for a secret wedding and what sparked the ensuing unpleasant relationship between Margaret and her mother-in-law.

The couple returned to live in Milleen House where children Henry and Vera were born. When Vera was about two or three the whole family went to live at St.Brenda’s House in Bandon (now called Overton House) which they rented.

The move was prompted because Margaret was so afraid of her mother-in-law that she couldn’t even bring her self to eat with her and she was very unhappy in her house. Margaret and Thomas Henry’s son Tom was born in St.Brenda’s. This is where the happiest years of Margaret’s life were spent and here she wrote most of her novels. She begun to write during her first marriage and continued to write until her death when she was in the middle of her book ‘’The Coming of Chloe’. She spent eight happy years in St.Brenda’s.

Her plots follow the usual conventions of romantic novels of the day. depicting love scenes that were never offensive to the ideals of Victorian morals

Her plots follow the usual conventions of romantic novels of the day. They contain delicate love scenes that were never offensive to the ideals of Victorian morals. Her works are characterized as entertaining and charming, though usually not of great depth. She tends to have little to see of character development, tending more towards flirtatious dialogue. She captured the tone of contemporary fashionable society, and sometimes used Irish settings.

Her novels had a great vogue in their day. Often writing on commission, she wrote many novels, short stories, and newspaper articles. Her books continued selling as fast as she could write them. Most of the books appeared anonymously but a few bore the pseudonym ‘The duchess’. Perhaps an indication that women authors still struggled to be recognised.

The first novel, ‘Phyllis’, appeared in 1877. Other books she wrote were ‘Portia’ , ‘Faith and Unfaith’, and ‘An Unsatisfactory Lover’ which tells the story of Terentia O’More who is a wilful, impoverished orphan who is courted by the well-off and older suitor, Mr. Trefusis, and her equally poor cousin, Lawrence.

The most popular of all was perhaps ‘Molly Bawn’ 1878; the story of a petulant Irish girl and a flirt, who arouses her lover’s jealousy and naively ignores social conventions. Margaret was officially credited with the well known saying ‘Beauty is in the eye of the beholder’, which appeared in her novel ‘Molly Bawn’. (www.phrases.org.uk)

Her most famous work was ‘Molly Bawn’ 1878; the story of a petulant Irish girl and a flirt, who arouses her lover’s jealousy and naively ignores social conventions.

On January 24th 1897, Margaret died of typhoid fever at just age forty-two. She was buried in the Hungerford of Cahermore vault in Rosscarbery. Her coffin was carried by the tenants of Cahermore estate from the causeway to the church. Her husband Thomas Henry Hungerford was broken hearted.

I searched for the Hungerford vault in which Margaret was laid to rest in and luckily I found it in my hometown of Rosscarbery. The inscription on the base of her tomb reads:

Margaret Wolfe Hungerford wife of Thomas Henry Hungerford died 24th Jan 1897 ‘Neither death nor life shall be able to separate us from the love of God’.

The 18th and 19th century saw an increase in women writers. Women like Jane Austin, Charlotte and Emily Bronte were active writers of this time and along side Margaret, they helped in bringing down the wall around the idea that women were not educated enough to be writers. Even though they are two/ three centuries gone, they are perfect role models for female writers of the 21st century.

‘Rosscarbery: Past and Present Volume 13’