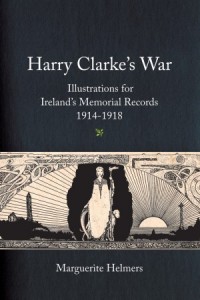 Harry Clarke (1889-1931) is best known for his magnificent stained glass windows but he was also a renowned graphic artist and illustrator, and carried out commissions for Harrap’s of London, among others.  He also designed letter-heads for such companies as the Irish National Insurance Company and his illustrations for Tales of Mystery & Imagination by Edgar Allen Poe were a major critical and commercial success.    Clarke was born in Dublin and trained in the Metropolitan School of Art in Dublin (1905-10) and, for a short period, at the National Art Training School in Kensington, London (1906).

He was commissioned, in 1919, to illustrate Ireland’s Memorial Records 1914-18 which commemorate enlisted Irish men who died in World War 1 (WW1).   Published by the Irish Academic Press, Marguerite Helmers, Rosebush Professor of English at the University of Wisconsin Oshkosh, USA has written Harry Clarke’s War – Ireland’s Memorial Records 1914-1918, which gives fascinating details on the background and history of this commission, as well as Clarke’s approach to the illustration work.

From the 19th century onwards, there was a strong tradition of Irishmen joining the British Army, probably driven predominantly by the promise of a regular income in difficult times.  To encourage local recruitment, the country was divided into catchment areas, which resulted in such well-known regiments as the Munster Fusiliers and the Dublin Fusiliers.

At the outbreak of WW1, John Redmond (1856-1918), leader of the Irish Parliamentary Party, had called on Irish nationalists to support the Allied war effort by enlisting in the British Army.   He saw this as a means of ensuring the implementation of the suspended Home Rule Act.   In 1916, the Irish Volunteers and the Irish Citizens’ Army seized strategic locations in Dublin and declared an Irish Republic.  In 1919, therefore, Ireland was a country in turmoil, divided by the issue of Home rule.   Irish Nationalists saw their goal almost within reach whereas Unionists, led by Dubliner Lord Edward Carson (1854-1918), prepared for resistance by force.

Clarke probably received the commission for this work from his patron Laurence Waldron (1858-1923).   He was one of a small group convened by the Viceroy of Ireland, Sir John French (1852-1925), to create a memorial to the Irishmen who had died in WW1.   The group came together in July 1919 and decided to build a room to house a series of memorial scrolls in eight books.   These records list 49,435 men who were killed in action or died of wounds.

A hundred sets were sent to libraries and churches throughout Ireland and Allied countries.   After the Armistice, many countries produced such books of records as a memorial to their dead countrymen.   Such books did not include illustrations, therefore, Ireland’s Memorial Records are different in that they also include Harry Clarke’s elaborate depictions.

The complexity of enlisting in the British Army at the time cannot be underestimated.   While those who supported the British Government wanted to commemorate those who had sacrificed their lives, Irish Nationalists found this to be traitorous.   Surviving soldiers came home to a different Ireland and were not, by and large, regarded as heroes.   Helmers gives a general background to this complex history and also places Ireland’s Memorial Records in the context of the development of War Art, the Arts and Crafts Movement and popular silent films.   Most of the book is dedicated to describing and analysing the nine plates illustrated by Harry Clarke.

Clarke designed a Celtic inspired title page and eight illustrated bordered pages.   One could say that he took inspiration from Medieval Prayer books as they also have elaborate borders surrounding text.   Clarke’s borders contain soldiers in silhouette, ruined houses, graves, trenches, the Gallipoli Peninsula, cavalry, airplanes, tanks, bursting shells and search lights.   Clarke did not serve in the War and took his inspiration from photographs in such magazines as The Irish Soldier as well as silent black and white films.

Medieval manuscripts were full of lavish colours as are the stained glass windows designed by Harry Clarke.   In this instance, however, he has depicted the borders in stark silhouettes of black and white.   This adds considerably to their dramatic impact and authenticity.   Clarke is conscious of commemorating Irishmen as he uses Irish motifs inspired by the Celtic Revival as well as the Book of Kells in his illustrations.

The cover page has a round tower, a Celtic cross, a rising sun, a female figure of Ireland with wolf and harp at her side, as well as four angels holding the emblems of Munster, Leinster, Ulster and Connaught.   Clarke does not glorify war as his illustrations are both somber and thought provoking.   He also presents religious symbols such as the Virgin and Child, Cross of Sacrifice and angels with laurel leaves.

Clarke presents badges of seventeen Irish Regiments in his illustrated borders.   He also includes a kangaroo to honour the contribution of the Australian and New Zealand Allies and a maple leaf for the Canadians.   The book contains 49,435 names but it is contended that this represents only a fraction of Irish people who died as a result of WW1.    For example, Irishmen who served in other non-Irish regiments are not included, neither are there any female names.   What is incontrovertible, however, is Clarke’s artistic achievement in these books.

After Clarke’s death, Sir Edwin Lutyens (1869-1944) was commissioned to design a memorial garden and room in Islandbridge, Dublin, to house a set of these eight books.   He designed special cases for the books so that they could be displayed to the public, one page at a time, as happens to the Book of Kells in TCD.

Helmers has produced a meticulously researched book on the historical context and story of Ireland’s Memorial Records as well as the illustrations in these books.   She also confirms Clarke’s prowess as a graphic artist and as a key person in the Arts and Crafts Movement in Ireland.   As a footnote, Helmers points out that this book also represents two forgotten spaces – Ireland’s Memorial Records and the Irish National War Memorial Gardens at Islandbridge, Dublin.   She has sourced the locations for eighty sets of these books worldwide which are available to view.   Now would be a good time to seek out these forgotten gems and to read about them beforehand in this book.

Patricia Curtin-Kelly is a Cork born Art Historian who lives in Dublin.   She holds an M.A. in Art History from University College, Dublin and an M.Sc. in Human Resources Management from Sheffield Hallam University.   Her book, An Ornament to the City – Holy Trinity Church & the Capuchin Order, was published by the History Press in 2015.