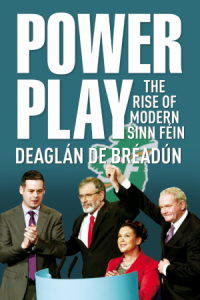 The publication of this book is timely given the imminence of the general election in the Republic of Ireland. As the author, a veteran journalist, puts it “Sinn Fein having gone from being the Provos’ brass band to becoming a key player in mainstream politics north and south of the border”.

In other words, Provisional Sinn Fein has moved from existing to support the Provisional IRA’s armed campaign in Northern Ireland, to first becoming the dominant wing of the Republican movement and then achieving electoral success on both sides of the border. The party has got to this position by splitting three times over the last 40 years.

According to De Breaduin, “Sinn Fein has gone from being the Provos’ brass band to becoming a key player in mainstream politics north and south of the border”.

First in 1970 when Ruairi O Bradaigh led a minority faction out of the Ard Fheis on the issue of abstentionism and the failure of the movement (Official IRA) to protect Catholic areas of Belfast.

The party split again on the same issue in 1986 when Ruairi O Bradaigh again led a minority faction out of the Ard Fheis to form Republican Sinn Fein and the continuity IRA.  On this occasion Martin McGuinness said  “The war against the British must continue until freedom is achieved but we are not at war with the government of the 26 counties”. Continuing he said “If you allow yourselves to be led out of the hall today the only place you are going is home.” He was right in that Republican Sinn Fein and the continuity IRA never achieved the same level of support as the Provisionals.

In 1997 the movement again split between those who wished to continue the armed struggle and  those who did not.  The split spawned the 32 county Sovereignty Movement and the Real IRA.

According to De Breadun’s sources, the IRA Army Council’s decision to call off their armed campaign was only arrived at after an intemperate attack on Martin McGuinness by a militant Belfast woman, which swayed the vote in favour of a ceasefire. Was peace arrived at by this woman’s counter-productive intervention?

Interestingly, before each of the Ard Fheiseanna where the major decisions were made, the Army Council of the IRA met and their view was on each occasion was endorsed by the subsequent Ard Fheis. This begs the question, does the Army Council determine Sinn Fein policy on major constitutional issues?

The major turning point in moving away from the ‘armed struggle’ and the policy of abstentionism came with the hunger strikes and with the election of the H Block candidates (2 TDs in the south and 2 MPs in the North) in 1981, none of whom took their seats. The following year 1982 Sinn Fein contested the new Northern Assembly elections winning 5 of the 18 seats. Again the successful candidates declined to take their seats.  In 1983 Gerry Adams was elected to the Westminster parliament as an abstentionist candidate.

The key breakthrough for Sinn Fein in the Republic came after the ruinous 2008 economic collapse.

This book is most concerned with events south of the border, as Sinn Fein attempted to achieve a political breakthrough there. Following the dumping of abstentionism from Dail Eireann in 1986 Sinn Fein fielded 23 candidates for the 1987 election none of whom were elected, having achieved only 1.9% of the national vote.  In 1992 the vote achieved was 1.6% which rose to 2.5% in 1997 when Caoimhghin O Caolain was elected (their first TD) and rose to 6.5% in 2002 with 5 candidates elected.

The key breakthrough for Sinn Fein in the Republic came after the ruinous 2008 economic collapse. In the 2011 General Election the party achieved 9.9% of the vote getting 14 seats , presenting itself as a left wing anti-austerity party. In the words of Sinn Fein MEP Martina Anderson, quoted by De Breadun here, ‘in Athens it’s called Syriza, in Spain it’s called Podemos, in Ireland it’s called Sinn Fein’, lining the republican party up with the European far left.

However, to its critics, De Breaduin reports, Sinn Fein, in the words of left wing TD Paul Murphy, is ‘fundamentally a nationalist organisation that uses left-wing rhetoric’. Similarly the current Environment Minister Alan Kelly (Labour) stated that “Sinn Fein are not a left wing party but they are a populist party with a northern command”.

This is a well researched book with interesting information and profiles of the main characters within modern Sinn Fein. Among them are, of course, Gerry Adams and Martin McGuinness, described here as ‘Butch Cassidy and the Sundance kid’, the significant of which escapes this reviewer. Of Adams, now a patriarch in the movement , one interviewee says, ‘he is a very strange man to be in a meeting with. He says very little and then, what he does say, everyone agrees with’.

Like those two, Martin Ferris of Kerry is part of the generation who cut their teeth in the IRA rather than Sinn Fein. He served 13 years behind bars, for which he makes no apology, nor does he apologise for supporting the move away from armed struggle, seeing the two phases as ‘complimentary’. He was also, we are told, a promising Gaelic footballer at one stage, but his IRA career and resulting imprisonment meant he never joined the roll of Kerry All Ireland winners. His generation is increasingly eclipsed in Sinn Fein by a new cohort.

The generation who cut their teeth in the IRA rather than Sinn Fein are increasingly being eclipsed in Sinn Fein by a new, more middle class cohort.

Mary Lou McDonald, a middle class Dubliner and leading figure in Sinn Fein in the Republic, is described as an atypical Sinn Feiner, having been to Trinity College and coming from a Fianna Fail family. Pearse Doherty  ‘the product of a mixed marriage in Irish political terms’ (Fianna Fail and Fine Gael) is described by a Sinn Fein delegate as ‘a financial rock star’.

Eoin O Broin emerges from this book as a very interesting figure, perhaps the leading light in the future in Sinn Fein. De Breadun compares him to Eamon de Valera (they both went to elite Blackrock College), though O Broin, who considers himself a left winger, would not appreciate the comparison. Elected as a city councillor for the party in Belfast he has since worked for charities in Dublin is now a member of South Dublin County Council. For De Breadun, O Broin is an intellectual who in the longer term may aspire to leadership of the party.

On the outer fringes, a humorous anecdote concerns the ill-fated attempt of singer Sinead O’Connor to join Sinn Fein in order to end the  partition of Ireland.  She was dissuaded, in her words, ‘they persuaded me I’d be bored shitless’.

At present Sinn Fein is in government in the Northern Ireland assembly and holds 14 seats out of 166 in the Republic  making it the fourth largest party in that jurisdiction. De Breadun anticipates that the party could double its number of Dail seats in the forthcoming general election.

Up to 1986, Sinn Fein would not enter the Dail at all, deeming it ‘partitionist’. They are now anticipating possibly entering coalition government in the south. Sinn Fein is mandated by its 2015 Ard Fheis not to enter “a Fianna Fail led or a Fine Gael led coalition but only to enter government based on Republican principles approved by an Ard Fheis”. A rather woolly formulation, but one which shows how far they have come.

The factors which could help Sinn Fein electorally are its opposition to austerity and the electorate’s unhappiness with the traditional parties. Sinn Fein is certainly different, its TDs for example, only take about a third of their salary, (34,000 out of 92,000 euro).

This book charts their progress to date and provides the reader with a well-researched and informative account of the journey from the armalite to the ballot box.

But it is vulnerable on questions such as its endorsement of the 2008 bank guarantee, its proposal to introduce a 17.5% corporation tax (potentially scaring away foreign investment) and its equivocation on the payment of water charges. But most of all it is tarred by its past association with paramilitaries, constantly kept in the public consciousness by the Maria Cahill affair (an alleged rape covered up by the party leadership), the McConville abduction and murder back in 1972 and the two recent Belfast murders, leading to suggestions that the Provisional IRA is still active.

De Breadun criticises the party’s tendency to simply deny rather than explain contentious issues, whether it be the bank guarantee or links to paramilitarism.

For the outcome of the general election to be favourable to Sinn Fein it will require transfers, something it has singularly failed to do in the past. It has been, in fact, transfer repellent.

The author opines that Gerry Adams will lead the party into the general election. He then speculates on the succession stakes which will arise mentioning some of the characters described earlier; Mary Lou McDonald, Pearse Doherty and Eoin O Broin.

The possibility that Sinn Fein will be in a position to join a coalition signifies a huge advance for the party over the last 80 years. It has gone from being a small marginalised party in the Republic to becoming a mainstream political force. One would wonder though if entering government will undermine their appeal as a party of protest, or further their long term goal of a united Ireland.

This book charts their progress to date and provides the reader with a well-researched and informative account of the journey from the armalite to the ballot box.

Jim Dorney is former General Secretary of the Teachers’ Union of Ireland and current President of the People’s College for Further Education.

One Response to "Book review: Power Play, the Rise of Modern Sinn Fein"