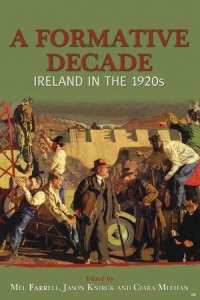 Politics and life in Ireland in the 1920s was dominated by the aftermath of political upheaval from 1912-1924 (now commonly referred to as the ‘Irish revolution’) that led to the partial independence and partition of Ireland.

This volume is a collection of articles on the fallout from nationalist revolution and civil war. Most essays concentrate on the Irish Free State – only one out of ten (Sarah Campbell’s ‘A Cold House for Catholics?’) deals with Northern Ireland – and, as contemporaries did at the time, wonders about how to explain and how to judge the results of Ireland’s violent break with the Union.

We might say that the shadow of historian John Regan is ever present in this book, despite him not contributing a word to it. Regan is mentioned in almost every chapter, mostly to decry his thesis that the ‘Irish revolutionary period’ was followed by a ‘counter-revolution’, in which the more conservative elements of the nationalist movement – those who had been ‘cheated’ of their prize of Home Rule by the mass mobilisation of 1918-21 – put down popular militancy in the Civil War of 1922-23.

This book is a collection of essays on the first decade of independent Ireland.

Successive contributors to this volume explicitly deny the value of this analysis, Mel Farrel arguing that Cumann na nGaedheal (the pro-Treaty party formed in 1923) was not in fact a reformation of the Home Rule party but a genuine continuation of the Sinn Fein separatist movement. Others wheel out the time-tested argument that the pro-Treatyites saved the nascent Free State from the anti-democratic and militarist ultra-nationalists on the ‘Irregular’ or anti-Treaty side.

Terence Dooley notes that the Land Act of 1923 was an impressive piece of politics on the Free State’s part in peacefully resolving the land issue, defusing agrarian agitation, and contrasts it with the pitfalls involved in more radical land policies, citing those pursued by Robert Mugabe and ZANU PF in early 2000s Zimbabwe that beggared the farming class and caused a collapse in food production.

According to Elaine Byrne the Free State Senate of 1922-1937, which came under sustained attack during the Civil War and was abolished altogether by Fianna Fail and Eamon de Valera in 1934, was a ‘unique experiment in idealism’ in incorporating former unionists and intellectuals like W.B. Yeats.

Mckayla Sutton shows how the Free State tried to divert nationalist idealism away from political violence and towards constructive projects like the Shannon hydroelectric scheme that enabled electricity to be brought to most towns in rural Ireland.

What is the problem with any of this? After all it is true that pro-Treaty nationalists did institute a genuine Irish democracy, in spite of the Civil War of 1922-23 and did let their former armed opponents participate in it – ceding power peacefully in 1932. It is true that they saved their new state from bankruptcy (a real possibility in the early 1920s), established fairly equitable security forces and managed to calm class and agrarian violence, which looked to be getting out of control in 1923.

We should not underestimate these achievements. But they do not explain why the ‘Irregulars’ (a pejorative name which historians should not use except in quotation in my opinion) had such substantial support, even for their somewhat incoherent position during the Civil War, and formed a movement that by the end of the 1920s was well on the way to winning power by democratic means in Fianna Fail. As Timothy O’Neil points out here, they did develop a fairly coherent analysis of both the political and economic shortcomings of the Free State and a programme to remedy it.

Part of the problem here is that ‘revolution’ still has a romantic air and ‘counter-revolution’ has connotations of reaction and barrier to progress and equality. In reality of course many revolutions actually make things much worse. Their achievements are paradoxical and their disappointments crushing. The Soviet Union’s principle accomplishment, for instance, was to keep the Tsarist Empire territorially intact and militarily stronger during its life-span, while it manifestly failed create economic prosperity and equality as it had promised. It was also much more repressive that its autocratic predecessor.

Ideas of revolution and counter revolution can be unhelpfully judgmental.

‘Counter-revolution’ is therefore probably an unhelpfully judgemental term, leaving people unnecessarily defensive. It is also true that the likes of O’Duffy, O’Higgins and Mulcahy had been ardent nationalist revolutionaries prior to 1921, not closet Home Rulers.

But another problem is that, as John Regan himself pointed out in his recent ‘Myth and the Irish State’ it has been necessary for mainstream southern commentators and historians to legitimise the origins of the Irish state against armed republicans, during the Northern Ireland conflict and even in the present day, who wanted to overturn the 1922 settlement in both parts of Ireland. This certainly still seems to inform a lot of debate on the Irish revolutionary period south of the border.

This has led to a certain blindness about the shortcomings of the Free State in its early years, certainly as seen through the eyes of those, around a third of the population at least going by election results, who identified with anti-Treaty republicanism. We can separate these shortcomings into three categories; incomplete independence, state repression and economic failure and inequality.

There is not enough explanation of why so many were so disappointed in the Free State by the close of the 1920s.

The Free State had the British monarch as its head of state, which as Jason Knirck, in a chapter on the Farmers’ Party notes, almost no one wanted but the British insisted on in the Treaty negotiations. The Free State’s ambitions towards a united Ireland died in 1925 when the Boundary Commission proposed no real changes in the border (and indeed proposed ceding part of Donegal to Northern Ireland).

And it conspicuously cooperated with formerly ‘imperialist’ elements in putting down republican opposition in the Civil War. James Campbell, for instance Lord Gleneavy the chairman of the first Free State senate, had along with Edward Carson, participated in a proposed armed provisional government of Ulster that would have resisted Home Rule by force had it been enacted for all of Ireland in 1914. His presence in the Senate, along with other former unionists can be seen as helpful pluralism, as Elaine Byrne argues here, but could also be seen by anti-Treatyites as confirming the ‘treachery’ and ‘pro-British’ tendencies of those who accepted the Treaty.

Secondly, while several contributors understandably decry the anti-Treatyites’ campaign against civilian pro-Treatyites (including senators and TDs) in 1922-23, there is no discussion of the state’s judicial execution of some 80 prisoners in 1922-23 and extra judicial summary killing of perhaps 150 more prisoners in the field (outside of those killed in combat).

The new state also interned over 12,000 people without trial, most of whom were not released until 1924. These emergency powers were renewed in mid 1923 and 1927, with the result that there were several hundred political prisoners in the Free State at any one time throughout the 1920s. Justified or not, it is not a great leap of imagination to see how this maintained a substantial constituency who saw the Free State not as a liberal democracy but a repressive pro-British regime.

Nor was it only republicans who thought this. Farrell is right to point out that Cumann na nGaedheal in fact had a rather rocky relationship in the 1920s with the National League (the remnants of the Home Rule party) but fails to mention why this party almost voted Eamon de Valera’s Fianna Fail into coalition government in 1927. As Cathal Brennan showed here on this Irish Story it was because in the wake of the IRA assassination of Kevin O’Higgins, the government reintroduced emergency powers of internment and execution. William Redomond of the National League argued that,

We, here on these benches, object to seeing our Government perpetrating the stale old blunder of attacking the legitimate exercise of constitutional rights and political action under the pretext of seeking to suppress or to prevent crime… But even the British Government, with all its difficulties, never passed so drastic a Coercion Bill as the present Public Safety Act, That …brings the country and the State into odium and contempt with the people who suffer from the tyranny of unconstitutional repression.

Finally and probably most important were the Free State’s economic failings. Basically what this amounted to was that Ireland unlike virtually anywhere else in western Europe, was haemorrhaging people, who emigrated throughout this period in massive numbers. In Ireland there was high unemployment, low wages and a distinct lack of opportunities. All of this was true under British rule and in independent Ireland until the 1960s.

This collection of essays has much in it of interest but needs also to be read with a critical eye.

Why was this a partisan issue and what did it have to do with the nationalist revolution? For one thing, Irish nationalists had always hoped that independence would reverse these problems of underdevelopment, clearly the Free State was failing to do so. Moreover its policy in the wake of the Civil War was to cut public spending and to cut taxes on the wealthy at the same time – favouring the existing possessing classes.

In the aftermath of the Civil War it had used its Army to put down strikes, reverse land seizures and collect unpaid rent. Strikers and land agitators were among those shot at and imprisoned. Its land reform of 1923 involved securing loans from the British government so that tenant farmers could buy out their leases to landlords but it did not redistribute any land. Republicans also argued, inevitably, that it was mainly a way of spreading patronage mong pro-Treaty supporters. The Cumann na nGaedheal policy of free trade with Britain favoured cattle exporters but did not, republicans argued, help to build up Irish industry. It provided only very limited public housing and few social services. There was a genuine famine scare in the west of the country in 1924-25.

In short, republicans could argue, as the Free State cosied up to former ‘imperialists’ so its economic policies simply ruled in favour of a wealthy, favoured minority of farmers and exporters. O’Neil’s chapter here gives a good account of the evolution of Fianna Fail’s thinking. But there is a general lack of appreciation among contributors that a significant section of the population did feel that the promises of the independence movement had not been achieved either in political or economic terms.

That Fianna Fail’s economic nationalism, statism and land re-distribution of the 1930s were only very partially successful remedies is not the point. It was not only ‘purist’ ‘absolutist’ republicans who were disappointed in the Free State in the first decade of its existence.

In sum, this collection of essays has much in it of interest but needs also to be read with a critical eye.

One Response to "Book Review: A Formative Decade, Ireland in the 1920s"