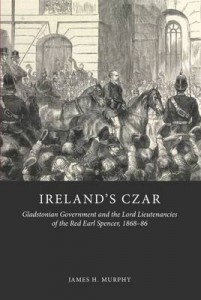 This work by James H. Murphy presents a description of the chapter in the history of Anglo-Irish political relations in the late 19th century, focusing on the lord lieutenancy of Earl John Spencer, { Princess Diana’s lineage } providing a thorough picture of the Gladstonian government, and its ebb and flow with the Irish public view of that system, especially concerning the increasing momentum of Irish nationalism in British politics.

This book looks at the career of Earl John Spencer as Lord Lieutenant of Ireland during the government of W.E Gladstone.

In this period, Gladstone the Prime Minister made a number of major concessions in Ireland, disestablishing the Protestant Church of Ireland, beginning a long process of land reform and attempting (without success) to implement some form of autonomy or Home Rule. However it was also a time of significant political and agrarian violence in Ireland including the Land War and Fenian factions like the Invincibles. For a time Ireland was put under a form of martial law or ‘Coercion’. Spencer, the Lord Lieutenant, in practice a kind of colonial governor of Ireland, was unfortunately for him, generally blamed for the latter while Gladstone took credit for the reforms.

The work is an important study, both, as John Spencer’s biography, and as a study of the constitutional and political culture. In that respect it shows that lord lieutenancy was used in a way that was damaging to the culture of the political and national affinity between Ireland and Britain.

Gladstone got the credit for reform in Ireland while Spencer tended to get the blame for coercion of Irish nationalists and land activists.

It is interesting to note that although this era of British and Irish history has been thoroughly studied, the lord lieutenancy, and, in particular, the impact of John Spencer’s policies, in a biographical sense, has not been written about in such detail. The work draws on a large amount of documents, letters, and archival papers, including the Royal British Archives. The letters of personal correspondence are used to bring the reader closer to the events described.

The work draws comparisons between Spencer’s two terms of service as a lord lieutenant (1868-1874 and 1882-1885). Throughout the book one may notice the distancing of Gladstone from Spencer – Gladstone unhappy at Spencer’s use of Coercion –  particularly in the second term, while Spencer remained passionately loyal, to Gladstone’s policies. In fact he became more Gladstonian – coming in the end to favour Home Rule – a policy voted down in the House of Commons in 1886 and by Spencer’s fellow peers in the House of Lords in 1893.

In the second term (1882-1885) Spencer and Gladstone formed a ‘bifurcated’ form of government (that is split between the government in London and the Irish administration in Dublin Castle), as opposed to the unitary government of the first term. Murphy points out that the ‘bifurcated government’ was not as successful in addressing the “Irish problem”, as Gladstone referred to it, with the Lord Lieutenant increasingly being seen as kind of dictator.

The work is an invaluable study of the political climate in the Anglo-Irish relations, the British government under Gladstone, and the effects of lord lieutenancy as an official position.

The public opinion of Spencer is shown throughout the book. In his second term his policies, especially his increasing of force in dealing with political crimes, as well as the growing political power of the Irish nationalists marked a significant change, making him increasingly unpopular. His use of Coercion – he had to travel everywhere with an armed guard – made nationalist politician William O’Brien refer to him as ‘Ireland’s Czar’. This was not a compliment, the Czar of Russia being held up universally as a tyrant in late 19th century western Europe.

This book also explores the politicisation of the Irish Parliamentary Party, which became for the first time a major force in this period, and the British Liberals, which paved the way for the eventual political alliance between the Irish nationalists and the Liberals.

The work is scholarly in nature, and although it reads like a biography, it is an invaluable study of the political climate in the Anglo-Irish relations, the British government under Gladstone, and the effects of lord lieutenancy as an official position.

If you enjoy well researched, detailed history of Ireland/Britain during 1868/1886 James H. Murphy does a brilliant job of recreating little known or forgotten history to life.