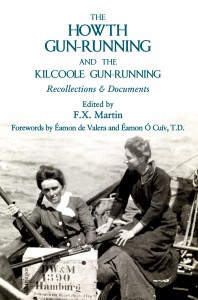 The Howth Gun-Running and the Kilcoole Gun-Running: Recollections and Documents

September 2014 was dominated by the increasingly vibrant debate on Scotland’s future within the United Kingdom, with Scots ultimately opting to remain within the Union. The irony of Tory MP’s hurriedly demanding ‘Home Rule’ for England in the referendum’s wake, almost exactly a century after they supported the threats of the Ulster Volunteers to resist a Home Rule Ireland by force, was not lost on many.

Appropriately, September marked the 100th anniversary of the passing of the 1914 Home Rule Bill; another important aspect of the Union’s history, albeit one whose significance has been overshadowed by the events of the years which followed. The debates in Ireland then and Scotland now are as interesting in their differences as much as in their similarities, notably the lack of a physical force element to the debate in Scotland.

Now a selection of annotated primary sources documenting the event that armed the Irish Volunteers, The Howth Gun-Running and the Kilcoole Gun-Running: Recollections and Documents, has been republished by Merrion Press on the 50th anniversary of its original publication in 1964.

The book is critically edited by F.X. Martin, the Augustinian Friar from Co. Kerry noted for his valuable contribution to research on the years prior to and including the Easter Rising despite having a background in medieval and early modern History, notably the Jesuit order. Best known for his contribution to the nine-volume series, The Course of Irish History, the ‘decade of centenaries’ has seen Martin’s work receive increased appraisal; Merrion Press have released another of Martin’s books on the period, The Irish Volunteers 1913-1915: Recollections and Documents, and the two books complement each other well.

Originally forwarded by Éamon de Valera, himself active in the Volunteer movement at the time of the landings at Howth, the book contains new forewords from de Valera’s grandson, the Fianna Fáil TD Éamon Ó Cuív, and Ruán O’Donnell and Mícheál Ó hAodha, both Professors at the University of Limerick. Ó hAodha introduces the reader of F.X Martin’s life and academic accomplishments, while O’Donnell’s contribution focuses on contextualizing the Howth landings for readers unfamiliar with the events discussed by the book.

He notes the disconnect between the fates of those involved in the gunrunning, with some of those involved becoming household names in the decades that followed while others would be cut down in their prime during the turbulence of 1916-1923. In the most notable example of the latter, de Valera became a fixture of the politics of the independent Irish state while others like Roger Casement and Liam Mellows fell to an early death in the events of the years that followed.

Martin’s own introduction to the original edition is also included in the text; he notes that the gunrunning at Howth was motivated in large part by Anglo-Irish and English liberals such as Erskine Childers, still a supporter of Home Rule, and the more forgotten Alice Stopford Green, as opposed to figures noted for their involvement in organising the 1916 rising, a direct product of the gunrunnings.

the gunrunning at Howth was motivated in large part by Anglo-Irish and English liberals such as Erskine Childers, and Alice Stopford Green

James Connolly’s Irish Citizen Army were not involved in the operation, receiving only a few guns abandoned by the Volunteers after the landings, while a letter from Pádraig Pearse late in the book reveals he was unaware of the landings until the last minute.  As O’Donnell notes ‘Trans-atlantic’ Fenianism had strong links to the landings, however, in the shape of figures like Bulmer Hobson.

The book is sub-divided into sections, each of which deals with a separate aspect of the landings: an initial section covering the formation and early period of the Volunteers, the planning of the gunrunning, the smuggling of the Hamburg-bought guns aboard the Asgard ship, the landings at Howth and the aftermath of the landings, with the British Army massacre of civilians at Bachelor’s Walk, Dublin, an atrocity which has been largely forgotten by popular memory. The first section contextualizing the Volunteers mostly draws on unsigned primary sources, such as from the Irish Volunteers newspaper and the government proclamations prohibiting the importation of guns into Ireland.

As the book goes on to discuss other aspects of the landings, it begins to draw on more personal primary sources, from well known figures like Pearse and Arthur Griffith to relatively more obscure ones like Mary Spring Rice and the literary figure Darrell Figgis. Figgis’ account reveals the difficulties those buying the guns faced, as the German government had banned the importation of guns to Ireland following the Larne gunrunning to the Ulster Volunteers.

The arms importers had to use the scarcely believable excuse that they were Mexicans to circumvent the ban, their use of Irish among themselves mistaken for ‘Mexican’ at one stage! The diary of Spring Rice from her trip aboard the Asgard is a particularly valuable source, giving us a day by day account of the ship’s voyage, and it casts light on the contributions of other forgotten participants in the landings, such as two fishermen from Gola Island, Co. Donegal, Patrick McGinley and Charles Duggan, who helped navigate the Asgard.

Martin casts an attentive and investigative eye over the contributions to the book, using footnotes to annotate the contributions and noting when recollections and accounts of the gunrunning clash with one another. Figgis, in particular, is identified by Martin as repeatedly making factual errors and exaggerating his own role in the landings.

Overall, the book is a useful overview of primary sources associated with an event

Overall, the book is a useful overview of primary sources associated with an event which is comparatively ignored, given its significance; without the success of the Howth gun running, it is doubtful 1916 would have happened. It gets the balance right between contextualizing the events discussed by the primary sources and leaving them unfettered for the reader to analyse for themselves.

The re-release of the book will hopefully help give those centrally involved in the gunrunning the more visible place in Irish history they deserve. Along with projects such as the 1911 census and the publication of Ernie O’Malley’s numerous interviews with War of Independence veterans on a county-by-county basis by Mercier Press, it illustrates the rediscovery of primary sources associated with the ‘decade of centenaries’, which has parallels to how the 50th anniversary of the landings helped prompt the book’s publication in the first place.

In particular, the role of women like Alice Stopford Green and Mary Spring Rice in the landings, at a time when women were seeking to push forward their place in the public sphere, is something which merits a greater public awareness, and the book’s rerelease will hopefully promote both a greater academic and popular interest in their lives.

One Response to "Book review: The Howth Gun-Running and the Kilcoole Gun-Running: Recollections and Documents"