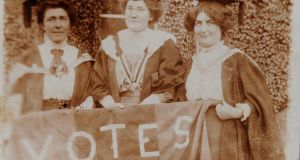 Conor Mulvagh on a little known piece of Dublin history: the first daffodil day, which was for women’s suffrage rather than (as today)  for cancer research, 24-25 April 1914, exactly concurrent with the Larne gun running.

The daffodil today is synonymous with the battle against cancer but, 100 years ago, Irishwomen used it as a symbol in their battle for votes while a militant fringe of Irish feminists fund-raised for rifles for their male counterparts in the Irish Volunteers. Every year, colourful lapels all around Ireland raise important awareness and funds for the Irish Cancer Society. The first Daffodil Day for cancer awareness was held in Canada in 1957 and the event has run annually in Ireland since 1988.

The daffodil today is synonymous with the battle against cancer but, 100 years ago, Irishwomen used it as a symbol in their battle for votes

Ann Matthews’ Renegades: Irish Republican Women, 1900-22 describes what appears to be the first Daffodil Day. The event, held in Dublin on 24 April 1914, was unrecognisably different from the Daffodil Day with which we are now familiar. On that day, suffragists joined forces with Cumann na mBan and highlighted the political work of women in Ireland.

In both Britain and Ireland, flowers played a key role in late nineteenth and early twentieth century political culture. Before Easter lilies and remembrance poppies, Parnell had his Ivy Day and the Conservative party had its Primrose League. In a wider social context, there was a whole vocabulary of floristry, from forget-me-nots to the pink carnations signifying gratitude. Suffragists too claimed their own flower and colour code when the daffodil, and the colour yellow, were adopted by the Irish Women’s Franchise League (IWFL).

Using an allegory that would be recycled by vendors of Easter lilies some years later, Margaret Cousins, an Irish suffragist then resident in Liverpool, wrote of Daffodil Day:

[O]ur Suffrage organisation … aims at the spring-cleaning of our national home … The IWFL recognise that Easter is the time above all others when nature and beauty can best come to the aid of Suffrage propaganda … all members must work to ensure the success of the Daffodil fête … The daffodil will reign supreme because it stands for the colour of our league.

Daffodil Day 1914 saw members from a cross section of Ireland’s women’s movements convene at the Molesworth Hall, on Molesworth Street, Dublin to celebrate women’s lives with an evening’s entertainment centring on a series of tableaux vivantes exploring the theme of ‘the great women in history’. Across Ireland, local committees were urged to hold their own balls and entertainments to make Daffodil a national event.

Although nominally an IWFL event, the programme of this first Daffodil Day pointed to the shifting discourse in Irish feminism and the hardening of attitudes as the primacy of constitutional and cultural activism gave way to militancy during the Home Rule crisis of 1912-14.

Of the fifteen images showcased by the suffrage activists that night, militaristic women were to the fore. Maeve, the Irish warrior queen, was the subject of one depiction, Ann Devlin (Robert Emmet’s housekeeper and United Irish activist) of another, while four separate portrayals of Joan of Arc, a personal favourite of Constance Markievicz, were featured.

Many of the women present at the Molesworth Hall, members of Cumann na mBan, were not merely playing at soldiers, they were raising funds for nationalist gun-running

Many of the women present at the Molesworth Hall for Ireland’s first Daffodil Day were not merely playing at soldiers, they were raising funds for gun-running. Cumann na mBan, the women’s auxiliary of the Irish Volunteers, was the newest women’s movement in Ireland, having been formally inaugurated on 2 April 1914. Veteran suffragists including Hannah Sheehy-Skeffington, the editor of the Irish Citizen, the official paper of the Irish suffrage campaign, were wary of this newly militarised movement in Irish feminism.

Despite deep divisions behind the scenes, 24 April was a day for Irish feminists to stand united. However, less than a week after Daffodil Day, Sheehy-Skeffington jettisoned unity for her principles and publically aired her misgivings about Cumann na mBan. This war of words culminated with Sheehy-Skeffington writing a letter to the Irish Times claiming that ‘The proposed “Ladies Auxiliary Committee” [of Cumann na mBan] has apparently no function beyond that of a conduit pipe to pour a stream of gold into the coffers of the male organisation…’.

In the history of modern Ireland, the night of 24-25 April 1914 is one of immense import. Irish politics was transformed overnight as the Larne gun-running signalled a serious undermining of the democratic process and one of the darkest chapters in the Ulster crisis.

As Daffodil Day was being celebrated, the unionist Ulster Volunteer Force landed arms and ammunition at a series of ports along the Antrim coast. For many, this marks the introduction of the gun into Irish politics and the gun casts a long and terrible shadow over Ireland’s twentieth century.

As Daffodil Day was being celebrated, the unionist Ulster Volunteer Force landed arms and ammunition at a series of ports along the Antrim coast

Larne is not something any modern-day parliamentarian on this island is eager to commemorate. It is a beacon for dissidents and potent symbol for violent paramilitarism. The gun-running at Larne was a major news event across Britain and Ireland. It no doubt eclipsed any media coverage which the Irishwomen’s Daffodil Day might have hoped for in the male-dominated press of 1914.

Larne is an event that demands serious attention both from academics and politicians and, if we don’t hear about it before the month is out, we must ask if reconciliation has trumped truth and objectivity in Ireland’s decade of commemorations. Selective history is distorted history.

However, a key goal in commemorating Ireland’s revolution should be the inclusion of forgotten voices. 100 years ago, gun-runners stole the limelight from a dedicated group of women’s suffrage campaigners making their last united stand at a watershed in national and gender politics. In some small way, we should right the wrong of a century ago and not forget this pioneering generation of Irish female political activists. Before April ends, perhaps we could remember them too when we wear our daffodil.

Dr Conor Mulvagh is a Lecturer in Irish History at UCD working on commemoration and the Irish revolutionary decade (1912-23). He is currently researching a history of UCD during the Irish Revolution. His PhD (UCD, 2012) and forthcoming book, was on Irish Nationalist MPs at Westminster between 1900 and 1918.

One Response to "First Daffodil Day organised by Irish feminists, April 100 years ago"