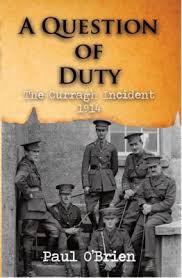 In April 2014, a Ukrainian government, provisionally established after the overthrow of incumbent President Victor Yanukoych, ordered the Ukrainian Army to oust armed pro-Russian activists in eastern Ukraine from various government, police and administrative buildings they were holding.

The operation ended in a fiasco as Ukrainian troops, unclear about what they were supposed to do, faced with hostile civilians, and doubtful, perhaps, of the legitimacy of the current government in Kiev, allowed themselves to be disarmed by crowds of civilians and in one case handed over six armoured personnel carriers to pro-Russian militants.

Events in Ukraine have yet to play themselves out but thus far they do show the perils involved in the use of the military in a situation of civil conflict. If the army obeys orders it faces the possibility of gunning down fellow citizens. If it does not, what is to stop illegal armed insurrection from spreading? And if the government cannot enforce its own laws can it really be said to be functioning as a government at all?

In March 1914 British Army officers at the Curragh camp threatened to resign if ordered into Ulster to act against the Ulster Volunteer Force and to impose Home Rule.

Almost exactly one hundred years before, in Ireland in March 1914, the British Army was faced with a similar dilemma, as Paul O’Brien recounts in his new book, ‘A Question of Duty’. In the face of unionist opposition to Home Rule, in which unionists under Edward Carson and James Craig had formed the Ulster Volunteer Force, elements of the British Army in Ireland were ordered north to guard certain vulnerable buildings from possible occupation.

At the Curragh base (today the headquarters of the Irish Army), Lieutenant General Arthur Paget sounded out British officers on what they would do if ordered into Ulster. This was clearly a delicate matter, not only because of the normal hazards involved in using the army as an instrument of coercion within one’s own country, but because the potential rebels in the north of Ireland were ostensibly loyal to the same King and the same flag that the British Army officers were sworn to protect.

Paget gave the officers two get-out options if they would not deploy into Ulster. One was, if they were from Ulster, effectively to take a holiday during the operation but otherwise to follow orders or resign their commissions. Around 100 officers indicated they would resign. Their cause was taken up by General Hubert Gough, who sought assurances from his high command that they were not about to embark on a war against Ulster unionists. This set off a scandal that eventually reached to the very top of the British Army, in the course of which their commander in Chief, John French would offer his own resignation to the government.

O’Brien makes the point that technically this was not a mutiny, as no orders were actually disobeyed. Some officers voiced the opinion that they would act as an aid to the civil power but not to enforce Home Rule on Ulster and certainly not ‘massacre’ (their words) the Ulster Volunteers. Some saw in the Liberal government’s concession of Home Rule a dastardly plot to break up the Empire and in Winston Churchill’s proposal to guard strategic buildings in Ulster, a conspiracy to shoot down loyal Ulster Protestants.

in the long run, the Curragh incident helped to bring down British rule in Ireland altogether

Whatever the technicalities were, the fact was that the military’s unwillingness to act against the UVF scuppered Home Rule as it was proposed in 1912. The Ulster Volunteers were allowed to arm and ultimately, in June 1914 Asquith, the prime minister conceded that six Ulster counties would be temporarily excluded from the Home Rule Bill; a dispensation that, of course, eventually proved to be permanent.

It is no exaggeration to say that in the long run, the Curragh incident helped to bring down British rule in Ireland altogether. Home Rule (a limited autonomy for an Irish parliament within the United Kingdom) was the law of the land in 1914, but the organs of the state were clearly unwilling to impose it on loyalists in the northern Irish province. The only strategy that worked, many nationalist concluded, was force.

The frustration of Home Rule was not the inspiration for the Easter Rising of 1916 – the IRB and other separatists had longed dreamed of an insurrection against British rule anyway – but the Curragh mutiny and the apparent impunity with which unionist defied the law in 1912-1914 helps explain how in the aftermath of the Rising the mainstream nationalist population turned to radical separatism.

This book is the latest in a string O’Brien has written on this period of Irish history. The previous ones have focussed on the events of the 1916 Rising. Like those volumes, this book is told in refreshingly straightforward and unfussy manner. The research is good and, as far as possible, the participants in the story, principally British officers, are allowed to speak for themselves through quotations of letters, documents and memoirs.

One has to feel for Asquith in particular, the British Prime Minister, who pointed out in parliament that the Home Rule Bill had specific guarantees against religious discrimination or over-taxation that formed the basis of the unionist case against Irish self-government. He also pointed out, O’Brien’s book tells us, that in all of the province of Ulster, there was only a very slim unionist majority and that an exclusion of the province from Home Rule would mean an imposition on the Catholic minority there. He ordered in 1914 that in future he wanted no consultation with officers about whether or not they would obey lawful orders.

The incident highlights the fact that a government is powerless against internal armed opposition if its own military will not follow orders.

As the provisional government in Kiev is currently also learning, however, if the state organs of coercion will not do what they are ordered, then little enough can be done about armed internal opponents but to conciliate them.

Why would British officers refuse to aid the civil power in Ulster? After all they had always put down nationalist rebellions and land agitation, not only in Ireland but throughout the Empire. More recently they had been deployed on numerous occasions throughout the United Kingdom to police and sometimes break up labour strikes. The answer lies in political circumstances of the time and in the political prejudices of the British officer class.

The Liberal government, which had previously enacted a series of social reforms and had downgraded the veto power of the House of Lords, was to some Conservatives (in a manner reminiscent of the more hysterical US republicans’ attitude towards Barrack Obama in recent years) not a legitimate government but a ‘lawless revolutionary assembly’, that must be resisted by all means necessary. The Home Rule Bill, which would dismember the Empire, was to this frame of mind the final straw. As a result, elements of the Conservative Party such as Bonar Law actively conspired with the Ulster Unionists and indeed helped them to import arms at Larne.

That many British officers shared this point of view we can see in a venomous letter, quoted by O’Brien, of one such officer to Labour politician in which he stated that, ‘the leaders of nationalist Ireland are at heart just as much rebels to our King and country today as they have openly and repeatedly proclaimed themselves to be until quite recently’. The true rebels therefore were John Redmond and his followers and not the armed militiamen in Ulster. It is worth noting that as well as public drilling and parading by unionists there had already been serious violence against Catholics and trade unionists in the shipyards of Belfast in 1912 by loyalists.

This is a good accessible read and is recommended to anyone with an interest in this pivotal event in early twentieth century British as well as Irish history.

The Curragh ‘mutiny’ was therefore in effect an assault on British democracy as well as Irish self-government. Those involved, notably Gough, French and Henry Wilson, as Paul O’Brien notes, were among the top commanders of the British armed forces.

The Home Rule crisis and the British Army’s role in it therefore assumed increasingly critical dimensions by the summer of 1914. How serious it might have become, though, we will never really know, as the Great War broke out in August and the Home Rule crisis was temporarily shelved. The regular Army, its flirtation with disobedience forgotten, was shipped to Belgium and France, where it fought hard and died in great numbers in the first six months of the war. A poignant aside towards the end of O’Brien’s book tells us how a note of thanks to the ‘mutineers’ in the Curragh at Christmas 1914 from Ulster unionists reached only a few of them, as many were already dead or seriously wounded.

In closing, this is a good accessible read and is recommended to anyone with an interest in this pivotal event in early twentieth century British as well as Irish history.

One Response to "Book Review: A Question of Duty, The Curragh Incident 1914"