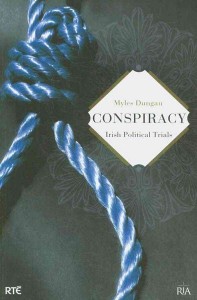 Conspiracy, by the prolific historian and broadcaster Myles Dungan, comprises the telling of seven court dramas involving Ireland that took place across the final twelve decades or so of British all-island rule.

Intercut with these courtroom spectacles in Dublin and London (dominated by four Gullivers of Irish history: Emmet, O’Connell, Parnell, and Casement) are intriguing close-ups of secondary actors such as detective John Mallon of Dublin Castle whose psychological acumen and discreetly worked connections led to prosecutions for the Phoenix Park murders of 1882. We are also treated to an account of the memorable withering in the dock justifiably suffered by the forger who came so close to destroying Charles Stewart Parnell:

Richard Pigott took the stand on 20 February 1889. He was a small portly individual, white-haired, and, though almost completely bald, sporting a white beard extraordinarily bushy even for an era of often ostentatious hirsuteness.

Humourous and journalistic, prone to a mild pedantry, Dungan’s style is enlivened by a winning sensitivity to the human side of his characters noting, for another small example, the ‘irksome shoes’ suffered by Superintendent Mallon. This eye for detail is further supported by deft use of contemporaneous reports although, at times, this reviewer felt that some of the details could have been dropped or further smoothed into the text.

Dungan can also fall prey to that perennial hazard of historical scholarship–falling into the archaic syntax of sources–but that only emphasises his deeply personal engagement with the material: here, as in previous books such as Distant Drum, we are in the hands of an independent intellect driven by passion for his subject.

And this passion unearths a world of colonial knavery. Time and again, we learn of juries stacked against Nationalists, of an Establishment so incensed by Irish claims to self-determination that the Law, held rigorously apart from policy in Great Britain, becomes an instrument of oppression when Ireland is involved and extrajudicial considerations are brought into play. In Dungan’s words, “the establishment sought to subvert its own laws for political purposes”–much as we saw a later empire/democracy of similarly split character, George W. Bush’s United States, treating Guantanamo inmates as “enemy combatants” to sidestep a Due Process that, properly observed, is the envy of the world.

Finally, one can hardly blame Myles Dungan for staying true to his thesis, but his self-imposed parameters are such that the two most scandalous cases of the time involving Irish protagonists (Wilde v. Queensberry and O’Shea v O’Shea and Parnell) are excluded, both of which–but especially the latter–surely belong in any book subtitled “Irish Political Trials”.

All in all, Conspiracy is a well-researched and readable book offering a lateral slice through Ireland’s Union-era tumult. The production too is of the highest quality, with illustrations and graphic elements taken from prints and drawings of the time. At the end, readers are left to contemplate the irony that the English legal system, counted by some as our neighbour’s greatest achievement, has lacked for the Irish that quality intrinsic to the most rudimentary body of law: Justice.