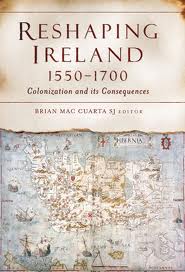 The period covered by this collection of articles, 1550-1700 was arguably the most decisive one in Irish history. At the start date, Ireland was a collection of quarrelling Gaelic and Old English mini-kingdoms, with a tenuous English enclave around Dublin. By its close it was a unitary state – The Kingdom of Ireland – but ruled by a relatively small English Protestant minority, who had also possessed themselves of most of the landed wealth in the country. Alongside them was a substantial settler population of English and Scots.

In 1550, as an article by Bernadette Cunningham points out, Irish was the working language of almost all the country, including much of the supposedly anglicised Pale around Dublin. By 1700, although it was still the majority spoken language, Gaeilge had been completely sidelined as the language of business, law and power.

Ireland had been rent by two, or perhaps three, wars of religion between Catholic and Protestant (1594-1603, 1641-52 and 1689-91) which had ended in English Protestant victory and the dispossession of the Catholic landed elite.

More important still, by 1700 Ireland had been rent by two, or perhaps three, wars of religion between Catholic and Protestant (1594-1603, 1641-52 and 1689-91) which had ended in English Protestant victory and the dispossession of the Catholic landed elite. These conflicts were complex. Colonisation and resistance to it is certainly part of the story, but the previously ‘English’ Catholic communities of the Pale and the towns, ‘became’ Irish as a result of their religion. Some Catholic English settlers of recent arrival even ended up on the ‘Irish’ side.

Much of subsequent Irish history has been determined by people attempting to either secure or to undo the results of this period.

This book is a collection of articles by academics on aspects of this period. It contains much of interest, particularly where it delves into micro stories of colonists on the ground. It has, to my mind, two weaknesses, however. One is perhaps unavoidable given the nature of the sources available and that is its concentration on English and upper class actors. English policy is discussed from the point of view of the Crown and its officials, while the experience of colonisation is entirely told from the perspective of the colonists. Only a single chapter – that on the 1641 rebellion in Wexford, deals with even elite Catholic responses.

But for most of us, it would be of greater interest to hear how the ordinary people – the vast majority – were affected were affected by conquest, war, colonisation and religious change. And on this there is very little. Jane Ohlmeyer’s chapter on the gradual Anglicisation and Protestantisation of the Irish Peerage (titled aristocrats) for instance is interesting, but the Peerage had only 68 members in 1641.

The literary sources of course speak mainly of the elite and the English-speaking elite at that. Many day-to-day government records were lost in the Four Courts explosion of 1922. But perhaps in the future, through use of archaeology and other methods, more of the whole picture of life at the time might be reconstructed.

A second weakness is that in what we might call ‘survey chapters’ – those which attempt to explain bigger topics – there is little new, that has not been written before in the last twenty years. Ciaran Brady shows how the Tudor monarchs did not intend their new Kingdom of Ireland, created in the 1540s, to be consolidated by conquest and massacre, but rather by ‘reform’, where the Irish elite would be gradually disarmed and assimilated into the English aristocracy, leading eventually to the Anglicisation of the rest of the population.

That it did largely result in violent conquest he attributes to the incompatibility of English and Gaelic systems. English law laid down that one heir would inherit a lordship while by Irish ‘tanistry’, the successor was elected from a kin group and the land distributed between the kindred. Disarming a lordship left it vulnerable to its armed neighbours.

Was the Tudor conquest driven by a desire to reform Ireland?

Enforcing English law inevitably involved the English in countless dynastic disputes, provoking violence. The only way to quell this was to use more violence, provoking more widespread resistance. Brady argues that in the end, importing a society governed by English law just could not be achieved except by smashing by the old order.

There is something a little unsettling about this analysis, it was English idealism, rather than acquisitiveness, that caused them to use massacre and forced famine as tools of conquest. Also, while Brady’s analysis does indeed present a useful insight into how the Tudor English administrators saw their actions in Ireland, it is not new. Brady has been writing about this since his publication of The Chief Governors back in 1994.

Similarly, the chapter by Bernadette Cunningham on the English language in Ireland in the period is interesting – showing how it was barely spoken at all throughout much of the 16th century moving on to its pragmatic adoption by Irish lords in the 17th and by the end of that century, making inroads into formerly Irish-speaking areas – it is not especially new. Nor is David Finnegan’s (well written) chapter on how some Old English Catholic intellectuals in the 17th century began to identify as ‘Irish’ and to embrace Gaelic Irish history of resistance to English rule as part of their own story. Those unfamiliar to the era will be well advised to read them but people more familiar with the area will feel they are covering well-trodden ground.

On the ground in early modern Ireland

Those criticisms aside, what is good about this collection? For me the two stand-out chapters are those about the careers of English colonists in Ireland in the period. James McGurk tells us about Captain Thomas Lee – one of the early breed of soldier-adventurer types who spearheaded the Tudor conquest. As often as not, Lee (who in early life got himself into trouble as highway robber in England) was an agent of disorder rather than ‘civilisation’ or ‘reform’. His men, ‘ran amok’ in Tipperary during the Desmond Rebellion of the 1580s, after which Lee made a lifetime enemy of the Earl of Ormonde.

After a spell ‘policing’ Kildare with a horseband of 75 men, he was arrested for getting involved in a clan feud between the O’Moores and Kavanaghs, in the end fighting a skirmish with the English Sherriff of the county. Later on he delivered tracts to Dublin Castle, at first urging leniency on Hugh O’Neill and the northern Gaelic chiefs in rebellion in 1590s, before changing course and urging total war against them, including massacres and scorched earth warfare. Finally he was arrested for his role in the Earl of Essex’s attempted coup against Elizabeth I in London, hung drawn and quartered.

Chapters on the careers of individual colonists tend to show them as lawless and aquisitive rather than agents of reform.

Brian MacCuarta’s chapter on another colonist, Mathew de Renzy is even more fascinating. De Renzy was born in Cologne, modern Germany,  of Italian origin (he spoke Italian, German, French, Dutch, English and later Irish too) and after a failed career as a merchant in Antwerp, he came to Ireland, landing in Dublin virtually penniless hoping to avail himself of lands confiscated during the plantations. Though he had possibly been a Catholic at one point, as an English-speaking Protestant he was duly granted lands in the barony of Delvin (modern Westmeath) at the expense of the MacCoghlan sept.

De Renzy was a literary man and not too surprisingly he fired off a number of pamphlets urging the dispossession or assimilation of the Gaelic landed classes. After familiarising himself with Irish texts, he came to the conclusion that ‘Clann Mil’ (the Gaels) had an ineradicable tendency to conquer or Gaelicise all incomers and only their own extirpation as a body would change this. Perhaps a little more surprisingly, given the times, he was not at all concerned with converting the Irish to Protestantism – judging it better that they be split between many religions and weakened politically.

Together, Lee and De Renzy’s careers seem to tell us that the underlying drive behind colonisation was more commonly desire for land and power on the part of colonists than civil or religious reform.

Two chapters on the wars of the 1640s – which started with the 1641 rebellion and ended with the Cromwellian conquest – are also well worth a read. Jason McHugh shows how long simmering economic and religious resentment of the New English Protestant settlers in County Wexford on the part of the predominantly Old English, English speaking Catholics there, combined with the increasing influence of the Counter Reformation, both led to rebellion and helped to control its excesses and mould it into a Catholic clerical sponsored counter-state.

The first time Derry was besieged, in 1648, the besiegers were Scots snd the garrison English

Kevin Forkan follows the fortunes of the Ulster Scots Protestant community throughout the wars. Today those in Ulster who identify with their legacy might be surprised to learn that initially the Scots were unconcerned with Gaelic Irish attacks on English settlers, believing Phelim O’Neill’s promises that they would not be targeted. The Scottish Presbyterians had been in conflict with the English King Charles I for two years previously over his attempt to impose on them the Anglican prayer book.

There is not space here to detail all of the contributions, but among them are Padraig Lenihan’s chapter on the Battle of Aughrim (on which he went into in more depth on the Irish Story here), revising down the death toll at the battle from 7,000 to a maximum of 4,000 killed. Also interesting are pieces on mapping and castle-building in post-Plantation Ulster (respectively by Rolf Loeber and Terence Reeves Smyth and Annaleigh Morely) and on Sir Richard Bellings, the late 17th century Catholic diplomat by Toby Barnard. Aidan Clarke shows how evidence from Protestant victims of the 1641 uprising was collected, while Brendan Kane examines how Thomas Wentworth, as Lord Lieutenant of Ireland, fell out with the New English colonial community in the 1630s. Alan Ford shows how Catholic Ireland was Protestant England’s hated and feared ‘other’ in the literature of the 1680s.

Overall, while there were aspects of this book I was disappointed in, it does contain much illuminating new material and sources for further research into the centuries that shaped modern Irish history.