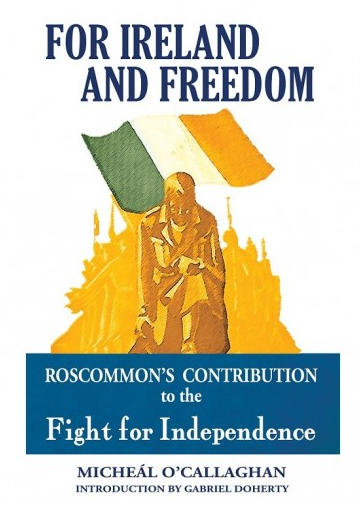 From Athlone in the south-east to Boyle in the north-west, Roscommon was the site of many critical engagements in Ireland’s War of Independence.

Mercier Press has re-issued the classic text on the period, For Ireland and Freedom: Roscommon’s Contribution to the Fight for Independence. The book, written by Michael O’Callaghan and first published in 1964, opens with an account of the victory of Count Plunkett, father of the executed 1916 leader Joseph Plunkett, in the February 1917 bye-election in North Roscommon and concludes with an account of the assassination of Sergeant King of the ‘Castlerea Murder Gang’ of the Black and Tans on the morning of the Truce in July 1921.

O’Callaghan was editor of the Roscommon Herald for over 30 years. He was also county chairman of the GAA for 13 years and was a founding member of Comhltas Ceoltoirí Éireann in the county.  He died in 1986.

In this extract from the book, the author writes about The Rockingham Raid and its aftermath

By 1918 the IRB had laid plans for securing arms wherever possible for the struggle, which they knew lay ahead. Instructions were passed from HQ to Volunteer units throughout the country to seize any arms they could lay hands on in each locality.

One of the places where it was known there was a quantity of arms and ammunition was the gun room in Rockingham House, near Boyle, then the seat of Sir Thomas Stafford, Bart. Accordingly a plan was drawn up for what has since been known as the Rockingham Raid.

The raid, carried out by IRB men from Boyle and Ballymote, is historic in the fact that it was one of the first raids for arms in the struggle for independence which followed the 1916 Rising. It could be regarded as the first action in the freedom war in the locality, and it was planned and carried to success without a hitch. In its own way, it was a straw in the wind of what was to come and it was a warning sign to the British occupation forces that the fire, which they thought they had quelled with the shootings and imprisonments after the 1916 Rising, was spreading and that the people of North Roscommon, who had given their answer in the ballot boxes in the 1917 bye-election, were prepared to take more active steps to gain their freedom.

The Rockingham raid took place in February 1918, and in charge of the operation was Alec McCabe, who was later a Sinn Féin TD for Sligo. Under his command were Patrick Delahunty, James P. Dodd, James Turbitt, James Haran, Stephen Brennan, John Sheerin, Martin Killalea, Patrick Sheerin, Patrick Spelman, James E. Feely, all of Boyle, and Batt Keaney, Keash, and Michael McGuire, Ballymote. The latter drove his car from Ballymote, accompanied by McCabe and Keaney, and they met the Boyle unit at the first Rockingham gate on the Carrick Road. The Ballymote car was used because it would not be known in Boyle.

The raiding party then went on foot to Rockingham House and split into two sections, one section approaching from the rear and the other arriving at the main entrance. The house butler answered a knock at the hall door and when he inquired who was there the name of an employee of the estate was given. He opened the door, only to be confronted by a party of raiders. When he tried to close the door again he was overpowered, tied up and gagged. The other section entered by the kitchen, where they found the rest of the staff engaged in a card game. All the staff were taken to one room and held under guard while the rest of the raiding party went to the gun room. There they found, and took away with them, three rifles, fifteen shotguns and a large quantity of ammunition.

Thomas and the rest of the family were absent from the house at the time. The raiders then withdrew and, in accordance with a prior arrangement, met the Ballymote car at the Dublin Lodge gate, nearer to Carrick. The arms were loaded on to the car and taken to an unknown destination and the raiding party dispersed. Huge-scale police and military activity followed the raid. Many houses in the locality were raided and hundreds of people were questioned. This went on for a week and then five men were arrested – Delahunty, Turbitt, Haran and Feely, who were in the raiding party, and George Plunkett, son of Count Plunkett, who chanced to be in the area organising for the IRB.

The five men were charged before the resident magistrate, Mr Kilbride, at a special court in Boyle and they were remanded in custody. They refused to recognise the court. When the magistrate said that they were being remanded for fourteen clear days, Turbitt inquired if it would make any difference if any of the days were wet!

They were marched to the railway station, under heavy escort, on their way to Mountjoy, and the British authorities in the area were perturbed when a crowd of about 2,000 people turned up to cheer the prisoners as they left. When they arrived in Mountjoy the famous Kerry patriot, Austin Stack, was just organising a fifteen-day hunger strike of all political prisoners in support of their demand for treatment as political prisoners. Up to then all political prisoners were treated as criminals and were made to wear convicts’ clothes. The prisoners from Boyle joined the hunger strike, and when they were brought back to Boyle for another formal court remand, they were so weak they had to be carried to the courthouse. They were remanded again in custody and had the satisfaction, after returning to Mountjoy, of learning that their demands for political treatment had been granted.

In due course, evidence was taken and when the taking of the deposition ended, informations were refused in the charges against Plunkett, Turbitt and Delahunty and they were discharged. The Rockingham butler, in the course of his evidence, said he recognised Feely and Haran as two of the raiders. They were returned for trial to the assizes in Roscommon and were remanded in custody in Galway jail.

The Roscommon Assizes came and went, but the Boyle prisoners were not tried. Feelings were beginning to run high and the crown prosecutors felt that a Roscommon jury might not bring in the desired verdict. After long delays the crown applied, at Roscommon, to have the trial venue changed to Belfast and this was granted.

At the Belfast Assizes in November, Feely and Haran were duly arraigned on the various charges of conspiracy, assault, stealing arms, etc. The star witness for the prosecution was the Rockingham butler, but when he was in the witness-box he said that he ‘only thought’ that the two defendants were two of the raiders. Not all the subtleties of the crown prosecutor could draw him any further. The crown case collapsed; Feely and Haran were discharged and they took the next train home to Boyle.

For Ireland and Freedom: Roscommon’s Contribution to the Fight for Independence
Michael Harrington
Mercier Press | €14.99

4 Responses to "The Rockingham Raid"