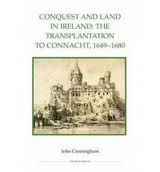 Conquest and Land in Ireland – The Transplantation to Connacht 1649-1680.

There have been few more decisive moments in Irish history than the Cromwellian Conquest of 1649-52.

Oliver Cromwell in Ireland at the head of the New Model Army of the English Parliament, recently triumphant in a civil war over the King, smashed Irish Catholic and Royalist resistance and proceeded to destroy the old Irish order in favour of a new Protestant, English ascendancy.

So the story goes at any rate. Hardly a popular account of Irish history misses out on mentioning that Cromwell ordered Catholics, ‘To Hell or to Connacht’ – i.e. leave their lands for the western province or die.

Former Taoiseach Bertie Ahern  insisted that the portrait of Cromwell (‘that murdering bastard’) be taken down from a room in Westminster before he began talks with British prime minister Tony Blair. As John Cunningham mentions in the introduction to his new book, ‘as late as 1965, the Irish minister for lands explained that his preferred policies were necessary to, “undo the work of Cromwell”.

However the reality of the brutal mid-seventeenth century conflict in Ireland and its settlement has been relatively little studied in recent times – partly due to the destruction of many of the relevant records in the Four Courts in another battle in 1922. The last work on the transplantation of Catholic landowners into Connacht– John Prendergast’s, ‘The Cromwellian Settlement of Ireland’ was published in 1865.

John Cunningham’s new work reconstructs the process by which Catholics were stripped of their lands in three provinces of Ireland as punishment for the Rebellion of 1641 and – if they were lucky – compensated with lands in Connacht behind the river Shannon and away from the coast.

The research is the fruit of many years of work in the archives and the level of detail will be of much use to historians, genealogists and others for many years. At the same time, the mass of information means that it is not always light reading. Nevertheless, much that is interesting and new comes out of this book.

Cunningham quickly dispenses with the first of the popular legends about the period. Neither Cromwell nor his successor commanders in Ireland, Henry Ireton and Charles Fleetwood,  ever ordered anyone, ‘to hell or to Connacht’. The phrase originates in the sectarian conflict between Catholic Defenders and Protestant Orangemen in rural Ulster in the 1790s, in which Catholic households would find the offending message pinned on their doors by night-time raiders.

Furthermore Oliver Cromwell himself comes out of the book not as ogre but as a restraining influence on his Parliamentarian comrades. Like many revolutionaries they were convinced that having smashed the old order, they could put the world back together as they pleased. In Ireland in particular they believed that they were God’s elect, come to enforce His will and also the rightful English Protestant claim to the country. Ireland, a parliamentarian quoted by Cunningham tells us was, ‘a white paper’.

The more cynical might also point to the fact that Parliament needed to compensate its creditors in the City of London and to pay off its demobilized soldiers with lands in Ireland.

The original wild plans included removing all Irish from the provinces of Leinster (to start with) and also the Scots from Ulster under pain of death and replacing them entirely with Protestant colonists not only from England, but also from as far away as New England,Bohemia(Czechs) and the Netherlands.

We know from the 20th century that such things are indeed possible – witness for instance the mass expulsion of Poles from the Ukraine and of Germans from what is now western Poland in 1945. In the 17th century, though such grandiose schemes were more difficult to pull off.

The economy, which here means simply the food supply, was very fragile and the ferocious guerrilla war between the Parliamentarians and the remaining Catholic forces in the early 1650s went a long way towards destroying it completely. Expelling tax-paying farmers and labourers from the north and east of the country at this time would have meant catastrophe for everyone in Ireland and the Parliamentarians knew it. So first the plans against the Ulster Scots were quietly dropped and in 1655, Cunningham tells us, the Act of Settlement was clarified to apply only to landowners.

Even on them, we learn, the full rigour of the intended settlement was only partially felt. Protestant Royalists were supposed to be expropriated but, following the example of the Earl of Cork, managed to get their penalty reduced to a fine, which further successful lobbying meant many did not pay.

Those Catholics who had fought on as guerrillas or ‘tories’ in the early 1650s, such as the officers of the Catholic Leinster Army, or withstood sieges, as had the townsmen of Galway, secured good terms for themselves and Oliver Cromwell himself was anxious that they be honoured, ‘for the sake of the Army and our own justice and honour’. Catholics, ‘not guilty of murder, massacre or robbery’, this book tells us, were in fact able to appeal successfully to Cromwell to avoid land confiscation throughout his reign as Lord Protector.

And while Henry Ireton had contemplated thousands of executions, both in revenge for the massacres of Protestants in 1641 and to force Catholics to leave for Connacht– in the event executions, occur though they did, were limited to the low hundreds.

This does not mean that the events of the 1650s were not significant. Protestants, even after the fall of the Cromwellian regime in 1660 were keen to paint the events of the previous decade as the final conquest of barbarous Ireland by the civilised English (though many of the displaced landowners were in fact Old English Catholics). Landownership in most of Ireland passed decisively to Protestants and only a few favoured Catholic Royalists recovered their possessions when the monarchy was restored in 1660.

The legacy of transplantation

Those who were transplanted to Connacht often found there was not enough land there to be allotted to them. Some of them displaced the pre-existing land-holders in Connacht leading to violence between Catholic ‘natives and newcomers’ in Connacht. In a case-study chapter on county Roscommon, Cunningham details the in-fighting, both legal and physical. As a symbol of the hardship of those times, one family retained, in what became in later centuries a country mansion, a crude cottage of uncut stone that their ancestors had constructed upon their arrival in the province in the 1650s.

Lest anyone be tempted to draw simple nationalistic conclusions though, Cunningham tells us that some of those Catholics transplanted to Connacht did become part of the landed Ascendancy – associated in the popular mind with the Plantations and Cromwellian settlers.

The Talbot family in Roscommon for instance, had their mansion burned by republicans in the civil war of 1922, no doubt because they were ‘imperialists’, while the Cheevers family’s estate by was compulsorily purchased by the de Valera government in the 1930s, for redistribution and they, ‘packed their silver, burned their papers and left for England from whence an earlier forbear had come with Strongbow in the twelfth century’.

Cunningham finishes by laying out the main points of his research – including the evolution of the Parliamentarian settlement from proposal to implementation and the role of its key players, Ireton, Oliver and Henry Cromwell and Charles Fleetwood.

‘Ethno-religious conflict over land’, he reminds us, ‘is far from a thing of the past’. He cites, interestingly, the current case of farmers in Mali displaced by large companies buying up land for food production.

More I thought, could have been made of comparing the Irish experience to events elsewhere both then – as in the forced population movements of the Thirty Years War – and later.

More could also have been said perhaps about the fate of the vast bulk of the Irish population. This book is, perhaps inevitably given the sources we have left, focused intensely on the fate of the landowners and the labouring population largely disappears from the text once they are excluded from the land settlement.

These criticisms notwithstanding, this book has taken important steps into understanding the 17th century revolution-from-above that landed on Ireland and will be a valuable guide to future research.

2 Responses to "Book Review: Conquest and Land in Ireland"