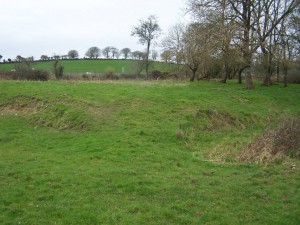 In this essay Gearoid Phelan explores the Medieval moated sites in Ireland. (See also The Castle in the Lordship of Ireland)

The moated site is an archaeological curiosity in some ways. A cursory glance through the indices of many general histories of Norman Ireland will reveal entries under ‘mottes’ or ‘motte-and-baileys’ but rarely, if ever, ‘moated site’. Yet these sites, as former settlements, are still quite common in parts of the Irish landscape. Therein lies their curiosity: moated sites, perhaps more than any other type of medieval settlement, appear to be arbitrarily laid out on a national level in the absence of any historical context.

Duffy, in his discussion on Irish mottes, makes mention of another type of early Norman settlement which, ‘unlike the motte, relied not on their elevation but on a palisaded bank and ditch.’[i] Glasscock extends this description and differentiates between two different types of moated site. It is worth citing this piece in full in order to furnish a comprehensive description of this settlement type:

The first, of which there are very few, is the very heavily fortified type … Hadden assigns this type to the first thirty years of the Norman occupation … the more common is the smaller, rectangular moated platform … [these] measure about 180 by 120 feet and are surrounded by a water-filled moat.[ii]

These water-filled moats are a curiosity unto themselves. Barry writes that the construction of moated sites was primarily for the purposes of defence – ‘the overwhelming desire for some kind of secure perimeter’ – and thus their proximity to an accessible water supply was a secondary consideration.[iii] Yet Glasscock, citing Hadden again, notes that, ‘nearly all moated platforms are found on low, wet ground.’ In the context of a defensive position, Glasscock notes these locations as something of a ‘curious paradox.’[iv] Indeed, the site photographed by this author was situated in a low-lying area, badly drained area. This fits in with McNeill’s view that moated sites were, ‘not very strong militarily’ and not intended as such.[v] 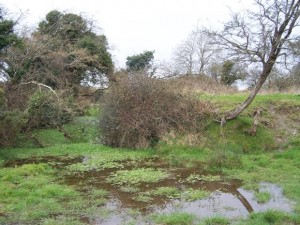 Thus we come to the purpose of moated sites. That they served a defensive function is obvious by the presence of a moat and the evidence that palisades existed on the interior. Yet some form of defensive architecture was the norm for settlements of the time in Ireland and the presence of the moat and palisade does not necessarily indicate any major attempt at defense.

Glasscock simply has it that, ‘the majority were defended residences of Anglo-Norman tenants and centres of local control and administration’ though he questions whether they were actually ‘a poorer man’s earth-and-wood version of the keepless castles of the late thirteenth century.’[vi] Barry would agree that moated sites were the option of residence for those Normans for whom a stone castle, or indeed a motte-and-bailey, was too expensive. He states:

Their inhabitants must have comprised several strata of Norman society, ranging from the small landowners who were little more than free tenants, up to the seigniorial classes who could not afford to construct and maintain a stone castle.[vii]

It is essential to examine the dates for the construction of these sites as the geographical factors would appear to be in tandem with the times of construction. Barry puts the dating for moated sites – ‘based on circumstantial or some form of archaeological or historical evidence’ – at the thirteenth and fourteenth century.[viii] Glasscock is inclined to agree, stating that, ‘in broad terms we may assign their building and use to the thirteenth and fourteenth century.’[ix] In the same paragraph Glasscock notes that this is a substantial amount of time after the dates for their construction in Britain. He goes on further to state that the period of their construction in Britain was concurrent with the initial two decades of Norman occupation in Ireland – the time of construction of mottes in Ireland. Here then we have a very crucial point with regards their locations in Ireland.  Duffy’s piece on mottes states:

The greatest density of mottes lies … in the eastern half of the island … In other parts of the island mottes are conspicuous by their absence, and here the settlers may have constructed military ringworks.[x]

We know that the hundred years or so following the mid-thirteenth century was a time of resurgence for the Gaelic Irish. The Norman colonists suffered a great defeat at Callan in 1262 as well as suffering reverses both in Longford and in Cork and Kerry.[xi] For the Normans, the situation had turned from offensive to defensive. This was not a period of rapid conquest followed by the construction of mottes for instant consolidation. Rather, this period saw the Normans falling back on previously held land and constructing defensive settlements with the express intent of defence. If one looks at the areas of Ireland where moated sites turn up most frequently, a pattern to support this argument emerges. Preliminary surveys using map evidence alone shows about 750 moated sites in the country. Of these, approximately 200 are in Tipperary,[xii] thus it is worth examining the situation in this county at the time to account for such an abundance of moated sites:

In 1329 Tipperary was [also] burnt to the ground. In 1336, O’Brien burnt Tipperary yet again, and in 1338, Ardmayle and Moyaliff in central Tipperary were devastated by the Irish … Northern Kilkenny and Tipperary were exposed to the constant attacks of the O’Carrolls and McGillpatricks in 1323, 1328-36, 1345 and 1346 … the period from the Bruce Invasion up to the ‘Black Death’ in Co. Tipperary, was one of “catastrophic decline”.[xiii]

Cork and Kilkenny were also Norman-controlled areas which came under increasing attack by the Irish in this period. These counties have approximately 100 and 80 moated sites respectively. This settlement type is to be found predominantly in the following counties not already cited: Wexford (80); Westmeath and Limerick(c.80); Clare (30) and Laois, Offaly, Wicklow and Wexford (c.20 each).[xiv]

The areas with the least numbers of moated sites are Connaught, Ulster and East Leinster. The former two for obvious reasons as moated sites were a Norman design and these provinces registered the least Norman military penetration. East Leinster must also seem obvious in light of the above information on moated sites; if these sites were indeed built during the Gaelic resurgence and appear in counties most threatened by the native Irish, then their appearance in the far east of the country would be somewhat unusual. As Barry says:

Counties which were in the heartland of the Anglo-Norman colony would have been so securely held that moated sites would not have been necessary to protect their inhabitants.[xv]

Thus the moated site must be seen as the inevitable choice of settlement for those Normans inhabiting the frontier, or ‘wild west’ ofIreland, accounting for their dearth or abundance in different parts of the country explained through an understanding of the historical context.

Gearoid Phelan is currently working on a PhD at the University of Limerick in Modern Irish Republicanism; though his historical interests include the Medieval and Early Modern periods in both Irish and European contexts