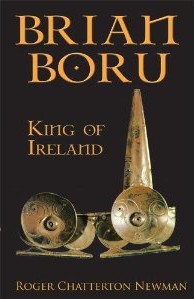 In writing a biography of Brian Boru, Roger Chatterton Newman took on what is one of the most challenging topics in medieval Irish history. Not only is Brian Boru dead nearly a thousand years with few surviving contemporary making a biography difficult, but he is perhaps the most controversial and misrepresented figure of the pre-Norman period in Ireland.

When I was offered the chance to review the re-released copy of Brian Boru King of Ireland (it was originally released in 1983) I was fascinated to find out how the author would tackle a figure shrouded in as much in myth as history.

The author, Roger Chatterton Newman, tries as much as is possible to follow the traditional form of a historical biography. The first chapter and a half lay out the historical and political background to the world Brian Boru was born into, chapter two and three introduce Brian Boru and from there out the book roughly charts his adult life until his death in the aftermath of the Battle of Clontarf in 1014.

In his opening chapter the author creates the impression that the Vikings were a greater force in 10th century Ireland than they actually were. However, this reflects the popular view when the text was first published in 1983. In the following chapters Chatterton Newman charts Boru’s rise within the wider province of Munster. The narrative takes us through warfare in medieval rural north Munster introducing the reader to the world of the lower Shannon basin increasingly dominated by the rising Dál Cais (Brian Boru’s family).

The detailed stories that fill out this section are largely based on a narrative taken from the controversial medieval Gaelic text Cogadh Gaedhel re Gallaibh. The reliability of this text has been questioned by many medieval scholars including Donnchad Ó Corráin in his work Ireland before the Normans (1972) as it is a highly stylised work of propaganda produced by Brian Boru’s descendants. This section of the book would have benefited if the author had spelled out more clearly that the historical accuracy of these stories is widely questioned.

The author’s focus on specific details of Brian’s life (historical accuracy aside) leads to a neglect of the more important historical issues surrounding Brian Boru – namely his rise to power and the famous battle of Clontarf. When he does discuss these issues his opinions are at times contradictory and lack clarity.

In relation to Boru’s rise to power, while Chatterton Newman acknowledges the widespread violence in Gaelic society in the late 10th century, he fails to pin point how this affected Boru. The increased violence was largely because the traditional power structure in Gaelic Ireland was breaking down. Chatterton Newman fails to recognise the importance of an incredibly destructive civil war which broke out between the Northern and Southern O Neill kingdoms in the mid tenth century, dividing the two branches of the O Neill’s who had dominated Gaelic Ireland for several centuries.

Chatterton Newman fails to recognise the importance of an incredibly destructive civil war which broke out between the Northern and Southern O Neill kingdoms in the mid tenth century, dividing the two branches of the O Neill’s who had dominated Gaelic Ireland for several centuries.

This war ultimately resulted in the fatal cleft emerging in the O Neill’s that ended their domination of Ireland. The author fails to coherently point this out or indeed its consequences. This specifics of this war are important as it allowed Boru’s father Cennetig, his brother Mathgamáin and Brian Boru himself to pursue an aggressive expansionist policy within Munster relatively free from O Neill interference. Following the style of the book which focuses heavily on the personal attributes of Brian Boru the author erroneously attributes the Dal Cais’ success to Brian’s talents in the diplomatic and military sphere. The reader is left with little sense that Brian Boru rose to power because he was able to prosper due to O Neill’s disunity.

When he turns to what many people regard as the major event in Brian Boru’s life – the battle of Clontarf – the author presents a confused picture of the events of 1014. While he acknowledges the Battle of Clontarf was not a struggle for Ireland’s destiny between Vikings and the Gaelic Irish (it was a revolt by the kingdom of Leinster against Brian’s rule supported by Viking allies) he subsequently over-emphasises the Norse participation at the expense of accuracy. While acknowledging the actual causes behind the battle – inter-dynastic warfare in Gaelic society, he at times slips back into the popular if inaccurate traditional narrative of Viking vs Gaelic.

He calls the army of Brian Boru the “Irish army”. This is problematic on several levels. Firstly he is supporting a false and nationalistic argument that Clontarf was a struggle between Vikings and “Irish” when in reality Brian’s own army contained contingents of Scandinavians. On a more general level he is projecting modern nationalism back onto a period which did not recognise or understand such concepts. Medieval Ireland was not a nation state but a series of medieval kingdoms and this is not relayed clearly enough by the author.

Medieval Ireland was not a nation state but a series of medieval kingdoms and this is not relayed clearly enough by the author.

Unfortunately, while Chatterton Newman’s book is an enthralling read at times, it cannot be recommended as a reliable secondary source on the period. It repeats too many arguments that are long dismissed, and at times reads as a defence of Brian Boru rather than research into his life. This is accompanied by numerous inaccurate dates (particularly surrounding the brief Viking exile between 902 and 914). The author’s lack of detail in his discussions can also be frustrating. For example, his analysis of the O Neill high-king Domnaill Ua Néill (956 -978) is highly unorthodox however he does not explain this opinion. He describes Domnaill as “peace loving”, a title hardly reflective of a man widely regarded by many historians as a military innovator.

Perhaps the book would have benefited from another format other than that of the biography. The problem with the traditional histories of the period which is repeated in Brian Boru King of Ireland is that they over-focus on the supposed personal exceptionalism of Brian Boru. To depict a more accurate picture of Brian Boru, his life and the world he lived in, more focus is needed not on Brian Boru but on the political landscape of the time with specific reference to the decline of the O Neills.

Some rights reserved by Giorgio.Melina