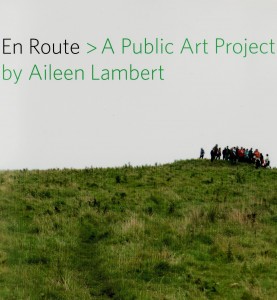 In a recent interview in the Financial Times, Irish novelist and film director Neil Jordan was asked what his current favourite word was. He gave a surprising answer. ‘Dinnsheanchas,’ he said. ‘An Irish word, meaning “the lore of place”.’ On the day this interview was published, the output from an innovative Dinnsheanchas initiative was presented in Claremorris, County Mayo. En Route – A Public Art Project, commissioned by Mayo County Council, produced by Aileen Lambert and comprising a book, two CDs and on online version www.enroute.ie , was launched.

The project is supported under the Percent Art Programme by Mayo County Council whose public art programme has to be one of the most innovative in the country. (The North Mayo Sculpture Trail, comprising fourteen individual pieces of sculpture across the North Mayo coastline is their most high profile effort.)  The concept behind En Route was to explore old landscape routes in the hinterland of Bekan, Southeast Mayo. It became, not just a collection of maps and a pulling-together of historical information, but a creative gathering of personal and community stories about the disused and forgotten pathways. While some of the routes such as the disused Ballindine railway had a documented history, many had a life only in local memory and oral tradition. 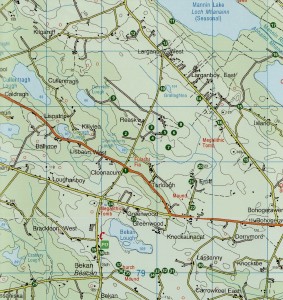 The thrust of Aileen Lambert’s artistic practice is tracing the ‘body’s presence on the landscape’. In En Route she sets out to examine how a community leaves its mark on the environment in the form of old routes and pathways. In the first project phase, she did her research of the locality in libraries, on the internet and through the Ordnance Survey. There then followed the innovative phase where locals were invited to walk the network of shortcuts and rights of way while their stories and memories were documented. ‘In the rural landscape there are names for every lane, gap, stream, wall and bend in the road.’

En Route brings to life the oral history and place lore of the area I grew up in:  the Lisheen burial ground at Reask for unbaptized infants; leaba Dhiarmada agus Ghrάinne near the ‘high crossroads’; Johnston’s route from Erriff to Greenwood by the ‘fόidin mearaí’; the house of the Burke landowners near Bekan Cemetery; the ‘pόirse’ down to Lios Bawn fields and Cathairín Hill. As the psycho geographer writer Iain Sinclair wrote, in tracing the Essex journey of poet John Clare: ‘We re-lived their history and remade our own.’ 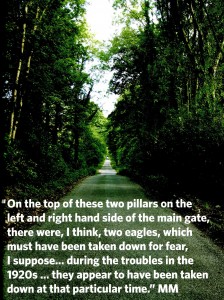 A quarter of a century ago a ground-breaking local history study, Béacάn/Bekan: Portrait of an East Mayo Parish (1986), edited by Father Michael Comer and Nollaig Ō Muraile, covered a largely similar physical territory to this project in a scholarly series of essays. In En Route we witness the community of Bekan re-living and remaking that history as they walk the network of paths and routes that criss-cross their local landscape. Perhaps we have in En Route a model for others in bringing dinnsheanchas and oral history alive for the enrichment of communities.

One Response to "Oral History and Dinnsheanchas: Tracing Old Routes Across Mayo"