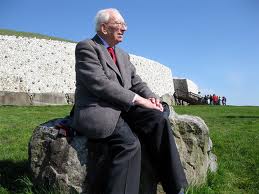 I watched this documentary through the prism of having recently read Shane Ross and Nick Webb’s Wasters, a book about the quango and expenses culture of Irish politicians, senior civil servants and habitual public board members.

In that light, Seirbhíseach an Stáit, the story of T.K. Whitaker, Ireland’s most well known and well respected civil servant of the 20th century, was even more refreshing and reminded the viewer of a different era in Irish public life were someone could rise to the top of their profession through merit and ministers didn’t feel it appropriate to use their state car if they were only attending ‘party political’ functions.

The documentary was not an in depth discussion of Irish economic policy in the 40s, 50s and 60s, although, inevitably, that played a large part.  It was instead a character study of an individual who led quite a remarkable life and who appears to be, at age 94, as active and engaging as he was half a century ago.

Whitaker was born in 1916 in Rosstrevor in County Down in a pre-partitioned Ireland and moved with his parents to Drogheda in County Louth six years later, where he described some of his earliest memories observing the Civil War raging through the town.  When he finished secondary school he sat the civil service exam where he obtained first place and began his long career in the Civil Service Commission before becoming secretary to the Minister of Education at just twenty years of age.  From there he moved to the Department of Finance in 1939 while in the meantime earning degrees in Celtic studies, maths, latin and economics.

The documentary opened with archive footage of Ireland in the 1950s.  The economic statistics for the period are stark; 400,000 Irish people emigrated during the decade, a further 100,000 unemployed and the Irish economy stagnating.  As commentators speculated at the time, the future of Ireland as a sovereign and independent country was actually in doubt.

In 1956 Whitaker was appointed Secretary of the Department of Finance at the exceptional age of 39.  The following year saw the return of Fianna Fáil to office.  Whitaker shook up a department known for its innate conservatism and hostility to change.  Whitaker’s plan to dispense with the Griffithite sacred cows of protectionism, tariffs and self-sufficiency found a receptive audience in Seán Lemass, who was elected Taoiseach in 1959.

Whitaker dispensed with the Griffithite sacred cows of protectionism, tariffs and self-sufficiency

Whitaker’s white paper, The First Programme for Economic Expansion, laid out a new vision for the Irish economy based on centralised economic planning, encouraging foreign direct investment and free trade.  The plans began to bear fruit as the 1960s saw an upswing in the Irish economy with sustained growth rates and declining emigration.

Along with the economy, Whitaker played a central role in two other important areas of Irish 20th century history, North/South relations and the EU.  Whitaker’s close relationship with some members of the Northern Ireland government and civil service paved the way for the first tentative steps of rapprochement between North and South in the mid – 1960s.  With the advent of the Troubles at the end of the decade Whitaker was a constant voice of warning to Jack Lynch against involving the 26 counties in any type of military entanglement north of the border.

Whitaker’s anecdotes about European figures such as de Gaulle gave an interesting insight into Ireland’s long and complicated route towards being invited to join the EEC.  In 1969 he became governor of the Central Bank and in that role he was to become a critic of what he saw as unsustainable public spending.

Following the 1977 general election, Lynch appointed Whitaker to the Seanad, where he spent two terms.  Whitaker described wrestling with his decision to become a senator because he valued his independence and only accepted the position when he found out he could sit as an independent and would not have to take the Fianna Fáil whip.

I felt there was a flaw in the documentary in that the film makers seem to have viewed Whitaker as, in some ways, Lemass and Lynch’s civil servant.  It would have been interesting to hear Whitaker’s opinions on working with the Inter-Party governments of the 1950s, especially since when Whitaker first became Secretary to the Department of Finance, his Taoiseach was John A. Costello of Fine Gael.

The documentary covered some of Whitaker’s passions in life apart from public administration.  His life-long interest in the Irish language and Irish culture and history were explored along with his commitment to education, in which capacity he became Chancellor of the National University of Ireland.

Whitaker has kept his own counsel on what the solution to the current economic crisis may be.  A return to public representatives and senior civil servants motivated by patriotism and the common good would be an excellent place to start.

Overall the documentary was an interesting and revealing insight into a unique man.  For many students of Irish history Whitaker’s name is synonymous with the grinding stagnation of the 1950s, the partnership with Seán Lemass and the new economic departure of the 1960s but the documentary succeeded in showing that there was far more to his life and career than just this.

Whitaker has kept his own counsel throughout the recent economic collapse and has declined to become involved in the public discussion of what went wrong with the Irish economy or what the solution may be.  After viewing the programme, a return to an ideal where public representatives and senior civil servants were motivated by patriotism and the common good would be an excellent place to start.