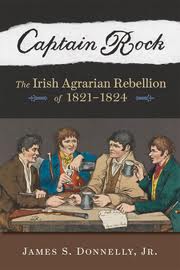 The aftermath of the Napoleonic Wars was hard on the labouring people of both Britain and Ireland.

During the War, due to the blockade of Britain, domestic industry and agriculture was protected from continental competition. In Ireland especially, there was a boom as prices for food exported to Britain rose. But as we are again learning, after boom there generally follows bust. After the War, prices collapsed. Landlords and factory owners suddenly found themselves exposed to the harsh wind of competition from the rest of Europe. In southern England this recession meant job losses and hardship – provoking a popular rebellion in 1830 called “Captain Swing”.[1]

In rural Ireland it meant that rents rose at a time when poor farmers were least able to pay them. And the poorest also had to pay taxes to the British state and tithes to the Established Church of Ireland, for neither of which they felt a great deal of love. A rapidly rising population and the resultant pressure on land-holdings added to discontent.

In west Limerick, this exploded in 1821 on the estate of William Courtenay into a ferocious bout of agrarian guerrilla warfare that would last until 1824. James S Donnelly’s book, Captain Rock, is the first to bring this little-remembered but fascinating episode to the attention of the modern reader.

“Captain Rock” was originally a nickname given to one Paddy Dillane of Shanagolden, Limerick, who with thrown rocks drove off labourers come to work on behalf of Alexander Hoskins, a particularly cruel agent of the landlord William Courtenay (himself almost a parody, it seems, of a feckless absentee landlord). Dillane was later behind the fatal shooting of the agent’s son.

In the disturbed times, “Captain Rock” soon began appearing on threatening notices to landlords, agents and others all across the south of Ireland. The Rockites wanted rents, tithes and taxes down and no evictions.

While the motivations of the Rockites may have been similar to those of the labourers of Kent and Sussex some ten years later, their actions were quite different.

In England there was great deal of arson and machines were wrecked by unemployed workers, but there were few if any killings.

In the initial months of the rebellion in Ireland there was an attempt at full scale insurrection in north Cork, with massed assaults of up to 2,000 rebels on Army barracks at Macroom, Millstreet and Newmarket that were repulsed after prolonged fighting.

In Limerick, Clare, Kerry, Cork and Tipperary, there was extensive raiding for arms and assassinations of landlords, their agents, “land-grabbers” and informers. Donnelly counts 130 such Rockite killings.

Landlords’ houses and Protestant Churches were also burnt down, as were goods such as stacked hay. There was also a gruesome incident of gang-rape of soldiers’ wives in Killdorrey, county Cork.

The British military, the Irish Constabulary and the Yeomanry met fire with fire; killing dozens, if not hundreds of people. There were also over 100 executions and around 600 Transportations to Australia of Rockite rebels. Such repression saw the rebellion peter out in 1824. Donnelly also suggests that violent activism of ‘Captain Rock’ became less attractive when the more peaceful method of agitation favoured by Daniel O’Connell in pursuit of Catholic Emancipation began to gather momentum.

The repression of the English “Captain Swing” revolt was also harsh (19 executions and 505 Transportations). But the lethal violence there was almost all of the government side. The question immediately suggests itself, why was Ireland so much more violent than England in its response to the same social crisis? Donnelly’s book suggests that the answer lies in the historical religious and cultural antipathies in rural Ireland.

In the counties affected by the Rockite rebellion, the landed were almost wholly Protestant and frequently English – especially in the case of their agents.  The poor were Catholic and in these areas still predominantly Irish-speaking. Donnelly shows that many Rockites saw the rebellion not only as an emergency response to deteriorating living standards, but also as an opportunity for a historic victory over what they understood as their hereditary oppressors.

The Rockites combined Catholicism, Jacobitism and elements of United Irish republicanism in their thinking

Among the Rockites, many of whom seem to have been literate, we find a confused range of views, combining Catholicism with traditional Irish Jacobitism and the republicanism introduced to the countryside by the United Irishmen some twenty years earlier.  Donnelly pays particular attention to the influence of the prophecies of “Pastorini” (in fact an English Catholic Bishop named Charles Walmesly) who forecast that 1822 would see the end of Protestantism and the triumph of the True Faith.

All of this was quite disturbing to the “official” Catholic nationalists, largely composed  of the better-off Catholics under Daniel O’Connell in the Catholic Association. In Captain Rock we find them stressing that the rebellion was purely agrarian and denying that it had anything to do with Catholic or Irish aspirations. O’Connell was not above defending Rockites in his capacity as a lawyer but Donnelly shows that he was well paid for his endeavors with money the Rockites would extort from the rich.

Something that is not broached in the book, but which struck this reviewer, was the similar geography of the Rockite rebellion with the war of independence one hundred years later –both were largely concentrated in southwest Munster. Moreover, one is struck by the similarities between the organisation of the Rockites and the IRA at local level.

Upon entering the Rockites, recruits swore to obey the orders of his local “captain” and not inform on his comrades as well as, in some cases, to “have a Roman Catholic King and French Government”. IRA Volunteers, also largely groups of young rural men, swore comparable oaths to obey orders and to uphold the Irish Republic. The fit is not exact, many would dispute the prevalence of sectarianism in the IRA of the 1920s, but the parallels are there.

Historians such as Tom Garvin and Peter Hart have previously noted this congruence of geography and organisation between rural secret societies and the IRA. The continuities between the agrarian rebels of the 19th century (through the “tithe war” of the 1830s and the “land war” of the 1870s) and the nationalist guerrillas of the 20th may be worth looking into further.

James Donnelly’s book is fascinating glimpse into pre-famine Ireland. It was a world where the majority were certainly oppressed by the social and religious order but their sometimes murderous actions are a reminder that the oppressed can sometimes be as cruel and vengeful as their oppressors.