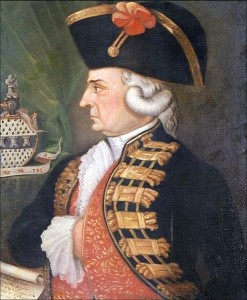 Either on this day in 1801, or tomorrow (the sources vary) Ambrose O’Higgins, Viceroy of Peru, died in Lima. And you think this isn’t Irish History. And in one sense, you would be right. It isn’t. But, and it is an important but, in another way it very much is.

Firstly, Ambrose was one of those fine Irish exports, an emigrant in the service of a foreign power. Such service was something the Irish excelled at. Irishmen and women served empires as diverse and varied as Austro-Hungary, Spain, France, Britain and the undeclared but real Empire of the United State of America and many still do.

In Ambrose’s case, he ended his days at the top of the pile in Spanish service. Like many before him, he found that the catholic empire of the Spanish was a fertile territory for growth and success. In the years between 1690 and the early 1800s, Europe was much more promising territory for Irish emigres than the United States. It was only as the US economy began it’s rapid expansion and thus demanded many, many more workers that Irish people responded and the patterns of migration changed.

There were other factors in this shift too. In the earlier phases, the nature of the emigrant was different. Elites and soldiers populated their ranks rather than families and the less well positioned as made up the largest body in the later emigrations.

Secondly, much as Ireland has been heavily influenced by events beyond our borders, and events within our borders have been influential on the world at large, Ambrose and his path show that Irish people themselves have had immense impact on the wider world. The focus of our history should just be on the narrow gauge of our relations with our over powerful neighbour nor indeed merely on the minutiae of events on this small and seemingly isolated island, but in the flow and change of a much broader picture, one Irish men and women were engaged in and actively shifting and shaping throughout the history of the island.

To return to Ambrose who’s path from Meath (or Sligo depending on which version of the family history is the more accurate) to Lima was not without it’s interest and a quick study of his biography is worthwhile. However in many ways his greatest legacy was his illegitimate son, the liberator of Chile, Bernardo O’Higgins:

Don Bernardo O’Higgins, the supreme director of Chile, possesses a considerable share of real courage; is resolute in executing a determination, but tardy in forming it; diffident of his own abilities, he is willing to take advice from any one, but always inclined to consider the last as the best. Thus, without forming his plans on the judicious analysis of the counsels offered, by eschewing the good, and rejecting the evil, he has often been led into difficulties in his political administration. These waverings were highly injurious to the furtherance of Chilean prosperity, which was, no doubt, the idol of his soul; and this same want of determination often produced evils of no less moment in the military department. His love of his country was doubtless sincere, and perhaps his earnest desire to be always right sometimes led him into errors; but in this case it is more just to judge of the motive, or the cause, than of the action, or the effect. The establishment of the senada consulta was in itself a virtuous measure; but the expectation of finding five individuals who should see the good of the country, and the advancement of its true interests, through the same medium as himself, was one of the virtuous mistakes of O’Higgins, which placed him under the control of his own creatures, and often retarded the execution of plans of vital importance to the state, and rendered their execution either abortive or nugatory. The private character of O’Higgins was truly amiable. He was kind and condescending; apparently more at home at his evening tertulias than when under the canopy of the Supreme Directorship. In the whole of his conduct it might be truly said, that

Being the son of an Irishman, Don Ambrose Higgins, who died in the high situation of Viceroy of Peru, he was passionately fond of the countrymen of his father, and I believe an Irishman was never deceived in his expectations of support and protection in O’Higgins. In short, the character which a Chilean gave to me conveys a very accurate summary of his general outline. ” There is too much wax, and too little steel in his composition; however, there are few better, and many worse men than Don Bernardo.”