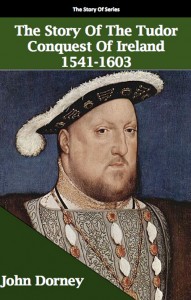 BUY THIS BOOK from Amazon

About The Book
In 1500 Ireland was mostly outside the control of the English government it was largely Gaelic in culture, and with a religious split that reflected ethnicity and not theology. By 1600 (or at least by 1607), all of Ireland was subject to the English monarchy. Gaelic cultural and legal systems had been sidelined and outlawed. Old ethnic divisions between Old Irish and Old English had been superseded by new ones and the beginnings of a bitter confessional divide between Catholic and Protestant had been fostered. In short, the foundations of Ireland’s modern history were laid in this period. This ebook tells that story.