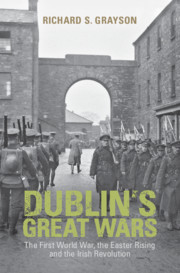 Ireland’s experience of the First World War has recently been the subject of much reflection and comment. Since the 1990s, there has been something of a project to ‘recover’ Ireland’s lost or ‘forgotten’ part in the Great War. According to some interpretations, Ireland’s military contribution to the British war effort – about 200,000 men served in the war and at least 35,000 were killed – was part of a ‘shared history’ that had been obliterated by an intolerant Irish republican narrative post-Irish Independence.

Whatever we may think of such a narrative; and I would argue that both popular support for the war effort and Republican antipathy towards war veterans has been greatly exaggerated; it should be acknowledged both that the war affected Ireland deeply and that the demands of total war created the context for armed insurrection in Ireland and ultimately for the end of British rule as it had existed prior to 1914.

Richard Grayson writes a comprehensive military history of combatants from Dublin, both at home and abroad, in the period of the First World War and the Irish Revolution.

Dublin’s place in the story of Ireland’s part in the Great War (and opposition to it) is particularly interesting. Dublin was both over-represented in recruitment to the British armed forces and was also the cradle of armed nationalist revolution in the Rising of 1916.

Padraig Yeates in A City in Wartime (2011) wrote in detail of the Home Front in Dublin. Here Richard Grayson of Goldsmiths University London writes a comprehensive military history of combatants from Dublin, both at home and abroad, in the period of the First World War and the Irish Revolution.

Grayson does not make many grand overarching arguments about how the World War and the Irish revolution interacted. He does not really explore, for instance, the idea that the terrible violence of the Great War made violence at home a more palatable prospect for political actors; an idea which is central to current thinking about the plethora of civil wars that plagued post-war Europe , for instance in Robert Gerwarth’s recent The Vanquished.

But this is probably deliberate and, on balance, a good thing. Ireland’s trajectory is much more messy than the equation: Great War = destabilisation + tolerance for political violence, would suggest.

In 1914, before the outbreak of the war in Europe, Ireland was already on the verge of civil war over the Home Rule crisis. Both unionists, in the Ulster Volunteers and nationalists in the Irish Volunteers had already raised and partially armed militias and the British officer corps demonstrated, in the Curragh incident of 1914, that it could not be relied on to remain neutral in the event of conflict.

While the First World War impacted heavily on the Irish revolution, it cannot be said to have caused it.

The temporary agreement of both sides to put aside their differences for the war’s duration actually defused the crisis. That the, albeit indirect, experience of total war, notably the threat of conscription, played its part in radicalising Irish nationalist opinion after the Rising of 1916 we need not doubt, but Irish experience of the war was highly complex and defies easy arguments.

So Grayson instead offers us a highly detailed and well researched account of how Dubliners joined the British forces but also the Republican fighting organisations and how they fared on the various battle fronts. Some of these stories are fairly familiar – Redmondite martyrs Thomas Kettle and Willie Redmond for instance, Home Rule Party MPs who followed John Redmond’s call to join the British Army fight for the freedom of small nations and died at the front. Or Emmet Dalton, who was with Kettle when he was killed in British uniform but later joined the IRA in Dublin and became one of Michael Collins’ right hand men.

Another interesting, story is that of the Dublin unionist company – part of pre-war paramilitary group named the Loyal Dublin Volunteers – who went north to join the Inniskilling Regiment to serve alongside fellow unionists.

But other stories demonstrate the mind bending complexity of some men’s decisions. Of these, probably the most remarkable is Michael McCabe, who served in the Easter Rising as a young boy in the Fianna, but subsequently, joined his previously avowed enemy in the British Army, in which he stayed until 1921. On discharge in 1922, he again joined intransigent Republicans in the anti-Treaty IRA in the Civil War of 1922-23, for which he was interned. But in the late 1930s Grayson finds him serving in a locally raised British regiment in West Africa in modern Ghana. Such stories, though in the minority, show how individual experiences of the war often defy easy categorisation.

Many Dubliners of course, joined the British military for economic motives. Grayson demonstrates that while there were many middle class volunteers, most recruits in Dublin were small in stature, on the verge of being malnourished and from the unskilled working class.

For all that, most served doggedly though the war, in which at least 6,000 Dubliners were killed. Those Irish units in Dublin in Easter 1916 fought without complaint against the Volunteer insurgents.

Unlike for example, Polish or Czech conscripts in the Russian or German armies, who changed sides in large numbers when captured, there was next to no take up among Irish prisoners of war for Roger Casement’s attempt to recruit a pro-German Irish Brigade.

Grayson puts this down to recruits’ fear that they would be breaking a solemn oath by changing sides and also to the widespread perception that, as Redmond had maintained, they were in a sense fighting for Ireland.

Grayson takes us in detail through the many and bloody campaigns in which Dublin troops served – from the prewar regulars in the campaigns of 1914, through the slaughter at the Gallipoli landings in 1915, where many of the Dublin Fusiliers were killed, through the battle of the Somme and the campaigns of 1917 and 1918. Their losses were somewhat higher than the British average, 19% as opposed to a mean of 12% fatalities, which Grayson puts down to more widespread service in the infantry among Dubliners than was the norm.

It is no exaggeration to say that Dublin men (and some women, principally as nurses), served all over the world. On the oceans with the Royal Navy, including the Battle of Jutland in 1916 and from the jungles of East Africa to the deserts of the middle east, as well as the familiar trenches of northern France and Belgium. Amid all the tragedy of war, it is somewhat amusing to read of the culture shock of Dubliners arriving in exotic climes such as Salonika or Cairo, where everything from language to religion to weather to clothing was strange to the Irishmen and their British comrades.

On the vexed question of the fate of war veterans in Ireland post 1918, Grayson has some interesting and measured points to make. Irish veterans were somewhat more likely to be unemployed in the postwar period than their British counterparts, but this was probably a feature of the class profile of Irish recruits more than anything else.

British Army veterans in the IRA in the War of Independence were numerically very rare, Grayson identifies only 16 such men out of around 3,000 enrolled in the Dublin IRA. But that said, some, notably Emmet Dalton, rose to senior positions in it.

Widening the scope outside of Dublin one could also point to locally important IRA figures such as Tom Barry and Ignatius O’Neill who were also British war veterans. British Army veterans were not sought out by the IRA, but where they did prove their loyalty, their military training was highly valued.

Grayson has interesting and nuanced accounts of how Irish Republicans regarded war veterans and war commemorations.

In the Civil War, it well known that the Free State’s National Army recruited heavily from among Irish British Army veterans, but so too, on occasion did the anti-Treaty IRA. Grayson disavows the idea that there was a general IRA vendetta against British Army veterans in Dublin or elsewhere. While some were killed by the IRA, there were 120 such cases, this is a small number out of at least 84,000 returned veterans. (One unanswered question here, by the by, is why so many who survived the war did not return to Ireland). In general, we might conclude, the relationship between Republican fighters and British Army veterans was estrangement rather than either friendship or outright enmity.

Regarding commemoration of the war, again, Grayson takes us on a nuanced and complex journey. Some veterans felt alienated from the British establishment by the end of the war and refused to take part in the victory parade in Dublin 1919. Home Rule, after all had not transpired and due to the Rising and the anti-conscription campaign, Ireland laboured under a kind of martial law by 1918.

But there were large Armistice Day parades in Dublin throughout the 1920s, despite the opposition to them of some militant Republicans. Prime Minister Stanley Baldwin praised Free State President W.T. Cosgrave’s ‘chivalrous and thoughtful’ response to an invitation to the 1926 Armistice Day in London. Cosgrave politely declined the invitation and sent minister Kevin O’Higgins instead because he was afraid that his record of fighting against British forces in Ireland would cause unnecessary pain and distress to the relatives of fallen British soldiers.

Even Eamon de Valera, the representative of the majority of anti-Treaty Republican opinion, was far more conciliatory to Great War commemorations than some popular accounts of today would have one believe. Grayson notes that the War Memorial Gardens at Islandbridge were constructed under the watch of his Fianna Fail government between 1937 and 1940 and was part paid for by his government.

It was only during the later Northern Ireland conflict that the Gardens were shut in 1971 and remained so until 1988. If Dublin and Ireland’s role in the First World War was indeed willfully forgotten, this did not happen until many decades after the war itself.

This is an extremely well researched and informative book, a worthy follow-up to Grayon’s previous ‘Belfast Boys’ on the service of Belfast men in the Great War. If it generally eschews grand arguments about Ireland and the Great War, it more than makes up for this with level headed and readable narrative.