‘Kiss Daddy goodbye, darling, he’s going off to fight for the Republic.’  Countess Markievicz’s propaganda cartoons, in the lead up to and during the Irish Civil War (1922-1923). By Alison Martin

Over the years, Countess Markievicz has been the subject of several biographies and articles.  Markievicz is most commonly remembered for her role in the Easter Rising and for her contribution to the women’s movement.

Thus far however, relatively little focus has been devoted to the propaganda cartoons which she produced around the time of the Irish Civil War. Although by no means a comprehensive study of all her drawings during this period, this article will look at some of the most interesting examples of her work.

During the first six months of 1922, the historian Lauren Arrington observed that the struggle between the pro and anti-treaty factions was ‘a war for public opinion.’[1]  Evidently propaganda was important to both sides.  The anti-treaty clandestine newspaper Poblacht na hÉireann, appeared in print several days before the vote had even been taken in the Dáil to decide the fate of the Anglo-Irish Treaty.[2]

Between 1922 and 1923, Markievic’s cartoons lambasted the treaty, leading treatyite politicians, the National Army and anyone else associated with the Free State.

Once the civil war began however, the use of propaganda became even more crucial.  Between 1922 and 1923, Markievicz produced a number of cartoons criticising the treaty, leading treatyite politicians, the National Army and anyone else associated with the Free State.

As anti-treaty republicans had more limited outlets for their work, Markievicz’s cartoons featured in several clandestine newspapers, including Poblacht na hÉireann and the Republican War Bulletin, both of which she had a hand in running.[3]  Some attempts were also made to get a wider audience for her work. Indeed, anti-treaty IRA leader Ernie O’Malley later remembered that some of Markievicz’s cartoons were ‘pasted on letter-boxes and lampposts’ around Dublin.[4] They were also circulated by members of Cumann na mBan.[5]

Depictions of the National Army and specific civil war incidents

Aside from references to individual incidents, it is difficult to determine the exact date to the month, that some of Markievicz’s cartoons were published in. It is noticeable however, that several of her 1922 cartoons depicted the National or Free State Army. Needless to say, these cartoons were less than flattering. One rather self-explanatory cartoon ‘A leaf from the Black and Tan book,’ suggested that there were parallels or even signs of continuity between the newly created National Army and the Black and Tans, an overwhelmingly British force that had come to be associated with brutality and ill-discipline during the War of Independence.[6] 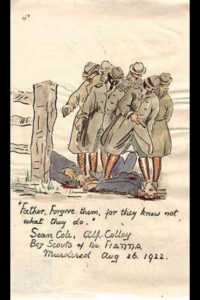 Such comparisons were fairly common republican slurs against the National Army. Another cartoon, ‘Free Staters in action,’ which was printed in the Republican War Bulletin depicted an elderly man trembling at gunpoint during a National Army raid on his home.[7]  The obvious message being that the Free State forces were preying on the vulnerable and humiliating those suspecting of harbouring or aiding republican fighters.

Evidently, the brutality of the Free State forces was a common theme throughout Markievicz’s cartoons. Arguably though, her most shocking drawings were the ones that depicted specific civil war events.

Markievicz’s illustration of the murders of two senior Na Fianna Éireann officers, nineteen-year-old Sean Colle and twenty-one-year-old Alfred Colley for instance, would have struck a chord with the public as it closely emulated witnesses’ descriptions of the event.  At an inquest into their deaths, Alderman Michael Staines, a pro-treatyite, claimed that the young men could have been killed by their own side, as he believed that Cole whom he was acquainted with, was allegedly about to leave the irregulars.[8] Similar claims were made by other figures.[9]

Markievicz’s illustration of the murders of two young Na Fianna Éireann officers, would have struck a chord with the public

There was some evidence however, to suggest that the young men had been abducted and murdered by Free State forces, most likely by elements within the Free State Army Intelligence and/ or the notorious plain-clothed detective squad the CID (sometimes known as the ‘Oriel House gang’).[10]  In this case there was no real need for Markievicz to use artistic licence in her illustration, as the true horror of the event was only too evident. For dramatic purposes however, she included the biblical quote ‘father, forgive them, for they know not what they do.’[11] 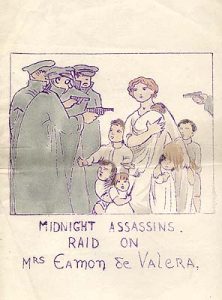 Despite Markievicz’s belief in gender equality, for propaganda purposes, the female subjects of her cartoons were sometimes relegated to conventional gender roles. Indeed, one of her most poignant civil war cartoons, ‘At a republican home’, depicted a mother and child kissing goodbye to their father before he goes out to fight in the civil war.[12]

The illustration, which is reminiscent of British recruitment propaganda from the First World War, includes a caption which reads ‘kiss Daddy goodbye, darling, he’s going off to fight for the republic.’[13]

Admittedly, this rather stereotypical portrayal of the woman being left at home with the children while her husband goes off to fight, would have been accurate in some cases and undoubtedly added to the tragedy of the scene.

Despite Markievicz’s belief in gender equality, the female subjects of her cartoons were sometimes relegated to conventional gender roles.

This was not always the case however. One of her cartoons ‘the bodyguard of the republic,’ depicted the figure of Hibernia with her arm around a female republican fighter in military uniform, though it was noticeable that an armed male figure was also present.  Ultimately, it cannot be denied that women were sometimes subjected to violence and intimidation during the civil war.  However from a propaganda perspective, it would seem that it sometimes suited Markievicz to play up to certain gender stereotypes, in order to emphasise the apparent brutality of the Free State forces. 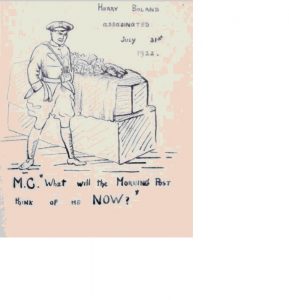 As chairman of the provisional government of the Irish Free State from January 1922 onwards, then commander-in-chief of the National Army, it is perhaps unsurprising that Michael Collins became was one of Markievicz’s prime targets. This was despite, or maybe even partly because of his respected revolutionary record.[15]

Although Collins claimed that the treaty was a stepping stone to independence, from the anti-treaty point of view, the acceptance of dominion status was a betrayal of the republic that had been declared in 1916 and ratified by the Dáil in January 1919.  It is unsurprising therefore, that Markievicz usually depicted Collins as either a traitor to the cause or an unwitting puppet of the British government.

Markievicz usually depicted Collins as either a traitor to the cause or an unwitting puppet of the British government.

One cartoon for instance, depicted Collins who was accompanied by W.T. Cosgrave and a bishop, holding a gun to the head of the shackled figure of Hibernia whilst ordering her to swear allegiance to the King.[16]  Another depicted Collins and Arthur Griffith as literal puppets of Winston Churchill.[17]  Interestingly, some of Markievicz’s cartoons also contained criticisms of Collins which were slightly less ideologically driven.  One particularly scathing cartoon depicted Collins dressed in a military uniform, looking down at the coffin of his former friend and fellow revolutionary Harry Boland.[18]

This image would have struck a chord with the public, as the later had been shot under questionable circumstances on 30th July 1922, during a raid by Free State troops at the Grand Hotel in Skerries. He died in hospital two days later. Despite the tragedy of the situation, Markievicz’s caricature of Collins is accompanied by a caption that reads ‘What will the Morning Post think of me now?’[19]

The obvious implication being that Collins was primarily concerned with the potential damage to his reputation and with how he was being portrayed by the media.  Markievicz’s specific reference to the Morning Post, a respectable British newspaper, is also significant as it had a primarily upper and middle class readership.[20]

It would seem then, that Markievicz was mocking Collin’s new found acceptance by certain high society circles in both Britain and Ireland. Moreover, she also seemed to be suggesting that Collins was primarily motivated by social climbing ambitions and a desire for respectability. Yearnings which she seemed to be suggesting were closely connected to Collin’s support for the treaty.

Collins was not the only treatyite politician to become a victim of Markievicz’s pen. Indeed, a rather unflattering series of caricatures entitled ‘Free State freaks’, have become one of the more well-known examples of Markievicz’s work.  As a result of the Anglo-Irish Treaty, the treatyite politicians were often depicted by Markievicz as being controlled by or even enthusiastically supportive of the British government.

In one cartoon for example, the President of the Executive Council, W.T. or ‘Comic Cosgrave’ as he is referred to, is portrayed sitting on a throne in a jester suit with a union jack card in his left hand.[21]  Beneath the surface however, some of Markievicz’s cartoons contain slightly more subtle criticisms of the politicians, which are based more firmly on their supposedly new found wealth and social status.

Another cartoon in the ‘Free State freaks’ series for instance, depicted Andy Cope, the assistant under secretary at Dublin Castle, as the puppet master who is literally pulling the strings of the Free State politicians.[22]  It is noticeable however that W.T. Cosgrave has been portrayed with a top hat his left hand.[23]

Whilst Cosgrave and some of the other government ministers did sometimes wear a top hat on more formal occasions, it could be argued that the inclusion of the hat in cartoon encourages the public to forge a link between Cosgrave’s apparent subservience to British fashion and from anti-treaty point of view, his subservience to the British crown. Moreover, the top hat is a fashion accessory commonly associated with privilege and respectability.[24]

Given Markievicz’s own privileged background, her criticism may seem ironic.  However, as a committed socialist and anti-treatyite, Markievicz was eager to promote the idea that government ministers were overpaid and out of touch with ordinary people.

Indeed despite the fact that several government ministers had previously taken up arms to fight for Irish independence, several of her cartoons also suggest that the treatyite politicians were motivated by personal ambition and financial gain rather than any deep political beliefs. Markievicz’s rather unflattering caricature of Ernest Blythe for instance, makes a clever a pun on his name forename Earnán in Irish. The accompanying caption reads ‘I am Blythe for my salary is worth Earnin.’[25]

Propaganda, if managed effectively, can play an important role in shaping public opinion in the lead up to and during a conflict. It can be used for example, to maintain support for a particular cause or to reinforce specific arguments or ideas. It can also be used to maintain morale or to lower the morale of the enemy.

Ultimately though, in this case, it is difficult to deduce whether Markievicz’s civil war cartoons would have had a major impact on public opinion. When it came to propaganda, the anti-treaty republicans were working at a distinct disadvantage from the outset, as they had limited outlets for their work.

Clandestine newspapers for instance, could not compete with the circulation figures of mainstream newspapers, which for a number reasons tended to be generally supportive of the pro-treaty position. The distribution of propaganda was also a much more precarious task for the anti-treaty side.  Moreover, several of the anti-treaty printing presses in Dublin, were eventually discovered and closed down by government authorities.

In spite of these obstacles however, Markievicz’s cartoons contributed significantly to the republican propaganda effort during the civil war.  These cartoons along with the work of other anti-treaty propagandists such as Erskine Childers, helped to some extent to counteract the generally pro-treaty mainstream press coverage of the civil war. Moreover, her cartoons helped to highlight and reinforce specific republican criticisms of the treatyite politicians, the National Army and anyone else associated with the fledgling Free State.

2 Responses to "‘Off to fight for the Republic.’ Countess Markievicz’s propaganda cartoons in the Irish Civil War"