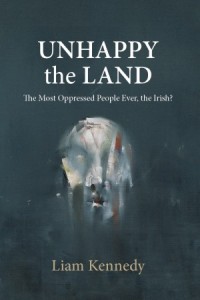 Liam Kennedy’s book is a selection of academic essays linked a common theme of misconceptions about significant events in Irish history.

From the point of view of Irish historiographical debate there is nothing new here, it is a subject that has been tackled before.  Particularly in Ciaran Brady’s Interpreting Irish History: The Debate on historical revisionism 1938-1994.  And the events Kennedy selects are themselves well covered by writers of Irish history.

Here the historiographical arguments are spread across three sections: ‘The Long View’ which deals with the complications of the north south divide, the plantations and the development of nationalism and unionism, The Famine which tackles the genocide debate and the Revolutionary Decade of which there has been so many publications it is difficult to see what more can be added.

The main theme of the book is the idea of Ireland’s perceived victimhood and compares some of its history with other nations, which have undergone tumultuous events over long periods of time.  Kennedy says ‘the motif of victimhood bulks large in Irish national self consciousness’ and thereby sets out to debunk some of the more popular ideas about the Irish being the hardest-done-by people in the world.

So we get some very interesting facts about the development of the economy and political structures juxtaposed with developments elsewhere.  The overall point being that actually we didn’t have it so bad and maybe others lived in much poorer and much more repressive conditions than the Irish.

Obviously people bend historical facts to suit a political agenda and this is, of course, very evident in Ireland and has been witnessed recently in debates surrounding the commemorations for 1916.  It is understandable that misconceptions, distortions and misinformation can be annoying; especially to someone whose profession is the study of Irish history.  But the argument is slightly over blown here and for the most part Kennedy has not provided enough examples of who has done or is doing the distorting.

The issue of the Irish Famine has been well documented and the debate around the accusation of deliberate genocide on the part of the British administration is old at this stage.  No historian with any credibility argues that case.  The way that the crisis was handled, the measures introduced whether adequate or inadequate and the indifference in some quarters to the suffering of people during the famine are of legitimate concern to historians.

No historian with any credibility argues that the Great Famine was genocide but the way the British handled the crisis is of legitimate concern to historians.

On the subject of comparisons between the Famine and the Holocaust, Kennedy takes a thematic approach highlighting what is similar and what is not between the two tragedies and is well worth reading.

Perhaps this points to a huge interest in the subject of the Irish Famine but from a historiographical point of view Kennedy argues that it indicates that ‘understandings of the past are formed primarily on the Internet nowadays, with only limited reference to evidence based research.’ That’s a big statement and it is a difficult one to quantify but perhaps a comparison to how many books have been sold on the subject might help to put the point into a better context.

This is the heart of the problem for all historians and not just those concerned with Irish history, although the downgrading of the subject on our junior cert curriculum is perhaps more worrying.  There is of course nothing wrong with learning history through song poetry, art, film or indeed the Internet, but it is the undermining of evidence-based research that ultimately leaves room for people, for a whole range of motives, to distort history.

The third section of the book deals with the Revolutionary Decade.  Here Kennedy dissects the text ot two of the most famous documents of the period, the Ulster Covenant and the Proclamation of Independence.

Kennedy compares the Ulster Covenant and the Proclamation of the Irish Republic and asks ‘Was there an Irish War of Independence?’

The analysis of the language and words used in both texts may be of interest to some but the frequency of adjectives and a chart demonstrating the use of words in each text may seem a bit pedantic and even unnecessary.  What is much more interesting is how both documents are used and interpreted by political organisations north and south of the border and how they build rhetoric around them.

The book finishes on the War of Independence, put in question format, Was there an Irish War of Independence? This is a short chapter, which does not go into great depth but makes a good effort to balance experiences north and south of the border, which is refreshing.

Unhappy the Land is a good read, very well written and worth it for anyone who wishes to be familiar with some of the biggest historiographical questions concerning the study of Irish history.

No doubt as 2019 approaches the debates and arguments on the nature of the political violence of the War of Independence will resurface.   If history readers take heed of the warnings about historical interpretation covered in this book, then they will take a critical view of all published history, consider the source, determine their motives and try to take a balanced approach.  If you are going to watch Neil Jordan’s Michael Collins then you should also watch Ken Loach’s Wind that Shakes the Barley.

Unhappy the Land probably suffers a bit from lack of originality and that may be due to it being a long time in the making, but it is a good read, very well written and worth it for anyone who wishes to be familiar with some of the biggest historiographical questions concerning the study of Irish history.

One Response to "Book Review: Unhappy the Land: The Most Oppressed People, Ever, The Irish?"