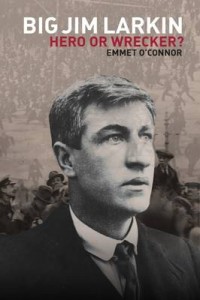 Jim Larkin’s life has a biblical quality to it. In 1913, he was likened to the prophet Isaiah, threatening the complacent Dublin bourgeoisie with destruction. In the 1940s, he compared himself to Ishmael, shunned by the labour movement just as the Abraham’s son had been kicked out of the family home. Like an Old Testament patriarch, he was unpredictably benevolent and malevolent, selfless and selfish, and did not deign to explain his actions. He is a fascinating figure.

Like an Old Testament patriarch, Larkin was unpredictably benevolent and malevolent, selfless and selfish

Surprisingly, Emmet O’Connor’s excellent new book is the first full-length biography of Larkin. It supersedes previous studies by Emmet Larkin, Donal Nevin and O’Connor himself by making use of valuable police records and Soviet sources recently uncovered in Britain, America and Russia. Comprehensive, well-researched and objective without being unsympathetic, this biography will be indispensable to students of Larkin, the 1913 lockout and Irish labour history generally. The author’s main focus of study is Larkin’s record as a leader. Contending that he was ‘a reluctant trade unionist and therefore an inferior union leader’, O’Connor nevertheless concludes that Larkin ‘remains the greatest of Irish Labour leaders’.

Born in Liverpool in 1874 to Irish parents, Larkin started work as a half-timer at the age of seven years, combining school with work as a milkman’s help. The exploitation involved in child labour had an embittering effect on his personality and was the source, he said, of his want of tact. From a politically conscious family, as a teenager he joined the Social Democratic Federation, a Marxist outfit.

‘Larkinism’, was industrial action by previously unorganized workers, characterized by sympathetic strikes. It reached its high point in the Lockout of 1913.

Soon afterwards, he became involved with the Clarion movement and the Independent Labour Party (ILP). ‘… Jim was a typical ILP’er, for whom socialism was a humanist religion, rooted in morality rather than science,’ writes O’Connor. ‘Throughout his life he was essentially a moralist.’ Working as a docker, his activism in the ILP led him to join the National Union of Dock Labourers (NUDL). A strike in 1905 confirmed his talent for inspiring oratory, securing him a temporary job, soon made permanent, as an organizer for the union. Impressed with his work in Preston, Aberdeen and Glasgow, the NUDL sent him to re-organize Belfast.

Between April and August 1907, Belfast was rocked by industrial unrest. Fearing the unionization of unskilled workers, employers went on the offensive, demanding that dock labourers renounce combination and that carters work with non-union men. At first, Larkin was conciliatory. However, finding the employers unyielding, he raised the stakes by demanding a wage increase for all cross-channel dockers.

The employers responded by locking-out their workers, some 2,340 men by mid-July. This was ‘Larkinism’, industrial action by previously unorganized workers, characterized by sympathetic strikes or the refusal to handle goods normally dealt with by striking workers, along with public rallies at which the workers’ cause was elevated and that of the employers condemned in impassioned rhetoric.

Alarmed by the violence, the NUDL leadership arrived from Liverpool and persuaded the men to return to work for a lot less than they had demanded. Increasingly wary of their man, the conservative union leadership parted with Larkin, whereupon he founded a new union in Dublin: the Irish Transport and General Workers’ Union (ITGWU).

Aiming to organize ‘so-called unskilled’ workers, the ITGWU’s short-term demands included an eight-hour working day, provision of work for the unemployed, pensions for workers at 60 years of age and compulsory arbitration courts. Politically, it demanded adult suffrage, the nationalization of all means of transport and ‘The land of Ireland for the people of Ireland’. However, the union’s internal structures and procedures were left unspecified.

Stung by the treatment he received in the NUDL, a jealous and impatient Larkin, writes O’Connor, intended that ‘the administration of the union would amount to one man rule’. In 1911, industrial unrest engulfed Britain. Influenced by the French concept of syndicalism, which posited that workers should eschew activism in political parties and ‘look instead to trade unions and industrial conflict as the primary instruments of class struggle and ultimately effect the revolution through a general strike’, dock workers and railwaymen went on strike.

When the conflict spread to Ireland, the ITGWU was in the thick of the fight. Though some wage increases were secured, a retaliatory lock-out of unionized employees by the Great Southern & Western Railway Company (GSWRC) and other employers stymied Larkinism.

O’Connor complains that the historiography on the 1913 Lockout has mistakenly pointed to Dublin’s poor social conditions – overcrowded tenements, high child mortality etc. – as the source of the conflict. In reality, he argues, ‘… the lockout arose from a collision of union strategy and employer policy: it was a product of Larkinism in the framework of industrial relations, not social misery’. William Martin Murphy, newspaper baron, hotelier, owner of Clery’s drapery store and chairman of the Dublin United Tramway Company, was alarmed by the threat posed by the ITGWU.

Impressed by the manner with which the GSWRC had put manners on its employees, he decided to emulate it. By late September, 25,000 workers were locked-out by Murphy and other employers. Larkin toured Britain attempting to enlist the support of trade unions. Although the British Trade Union Congress contributed £100,000, wary of syndicalism it refused to accede to Larkin’s demand that workers boycott goods to and from Dublin.

In retrospect, defeat in the lockout marked the end of the heroic phase of Larkin’s life.

In retrospect, defeat in the lockout marked the end of the heroic phase of Larkin’s life.

During this period, the admirable qualities he displayed – tenacity, inspirational leadership etc. – had established a new type of trade unionism in Ireland. At times, he displayed unworthy qualities too, including his tendency to demonise those who were not in total agreement with him, such as British union leaders, and his jealousy, demonstrated in his side-lining of James Connolly. During the next period of his life, the latter dominated at the expense of the former.

In 1914, Larkin decamped to America. His stated reason for going was that American unions wanted to learn from the ITGWU. Sceptical of this, many believed that he needed time to rest and recuperate after the strain of the lockout.

O’Connor agrees with this, though he also believes that there may be some truth in Larkin’s later statement that he emigrated in order to get arms and ammunition for a rebellion in Ireland; republicans had expressed sympathy for the workers during the lockout and Larkin had subsequently grown close to the Irish Republican Brotherhood.

In the main, however, the author contends that the ITGWU leader was weary of union work and saw America as the place where he would begin a new career as a globetrotting agitator.

Associating with left-wing groups and Irish Republicans and briefly reprising this role as a union organizer, poverty led Larkin to work for the German cause in the First World War by propagandizing against the conflict and fomenting strikes in factories supplying munitions to the Entente Powers. With America’s entry into the conflagration in 1917, however, his refusal to engage in violent sabotage led the Germans to terminate the relationship.

In America Larkin was imprisoned on a charge of ‘criminal anarchy’

Returning to the left, Larkin joined the Communist Labor Party. In November 1919, with America experiencing a ‘Red Scare’, he was arrested on a charge of ‘criminal anarchy’, of advocating the violent overthrow of the government. Put on trial and found guilty, he was sentenced to five to ten years’ imprisonment. Incarcerated in New York’s Sing Sing prison for the majority of the time, he was released on a free pardon in January 1923, only to suffer arrest and deportation from America shortly afterwards on a charge of being an alien anarchist.

When Larkin returned to Ireland, the ITGWU and other unions were on the back foot as the as the onset of a recession had emboldened employers to demand wage cuts of their employees. Fratricidal warfare, therefore, was the last thing the labour movement needed; that, however, was what it experienced thanks to Larkin. Although he did not want to return to union work, he could not tolerate the organization he had founded being run by others.

He launched vituperative attacks on William O’Brien, Thomas Foran and others in the ITGWU leadership. Taking a legal case against them, he cynically attempted to use an anti-trade union legal judgement of 1909 to beat his old comrades. O’Connor blames Larkin’s ‘unbalanced personality, in which egoism had given way to egomania’, along with stress caused by the collapse of his marriage.

The episode concluded with his expulsion from the Transport Union. His son Jim Jnr and brother Pete responded by establishing the Workers’ Union of Ireland, which soon poached two-thirds of the ITGWU’s Dublin membership. Relations between the two unions were poisonous for decades to come.

While in America, Larkin had been approached by the Soviet government, impressed by his revolutionary credentials. Once in Ireland, he hoped to engage in business deals with the communist state. Superficially, he was now a communist. He established the Irish Workers’ League, an organization dedicated to achieving a workers’ republic. And he was elected to the executive committee of the Communist International or ‘Comintern’, which worked to foment revolution throughout the world.

After his return to Ireland he split the labour movement and was elected to the executive committee of the Communist International or ‘Comintern’, which worked to foment revolution throughout the world.

In reality, however, he had little grasp of Marxist theory and was a Larkinite first and last. With, in O’Connor’s words, a ‘pathological aversion to any form of supervision or accountability,’ he resisted Moscow’s requests that he establish a communist party in Ireland, and when others attempted to do so without him he frustrated them. He finally broke with the Soviets in 1928, when they failed to place him in charge of their business concern in Ireland, an oil depot in Dublin.

The third and final act of the Larkin drama, from 1928 until his death in 1947, saw the protagonist defanged. If the break with Moscow in 1928 signalled the end of his interest in revolutionary trade unionism, the Catholic Church’s ‘Red Scare’ of 1931–1933 caused him to abandon revolutionary politics.

A reluctant trade unionist, he continued to dominate the WUI, which was largely confined to Dublin. As a councillor on Dublin Corporation and later a Teachta Dála, he championed issues such as housing and the employment of direct labour and supported Fianna Fáil’s tariff protection policy. His agitation against the Wages Standstill Order and the Trade Union Act 1941, along with a mellowing in his personality, resulted in reconciliation with sections of the labour movement. William O’Brien, however, preferred to cause a split in the movement than forgive.

What could a balanced and comradely Larkin have achieved had he been in Ireland during the upsurge in trade union militancy between 1917 and 1923?

Larkin is the great flawed hero of the Irish labour movement. He transformed trade unionism on the island in two ways. Firstly, he insisted that Irish unions should be predominant, thereby breaking the policy of depending on British unions, many of whom devoted little time to Ireland. Secondly, he pioneered an approach that organized workers previously ignored by trade unions and invested their struggles with moral values. His personality flaws prevented him from building on these achievements.

The reader finishes the book contemplating counterfactuals. What could a balanced and comradely Larkin have achieved had he been in Ireland during the upsurge in trade union militancy between 1917 and 1923?  Could he have influenced Sinn Féin’s social and economic policies? In the later 1920s, could he have worked with communist outfits to embed class politics in Ireland? We will never know the answer to these questions. Larkin’s good qualities drew on the same passion as his bad; therefore, the two could not be separated. He was a hero and a wrecker.