In April 1898, reports began to emerge in Irish periodicals that the self-proclaimed, world’s strongest man, Eugen Sandow, would be touring Ireland later that year. Readers of the Freeman’s Journal were encouraged to “look out for Sandow”.[1]

When it was later reported that Sandow would indeed be coming to Ireland in May 1898 to perform at Dublin’s Empire Palace Theatre, devoted fans prepared themselves for the show of a lifetime.

In the prime of his career, Eugen Sandow was known for having ‘the perfect physique’ and for being one of the foremost proponents of physical culture.

In the prime of his career, Eugen Sandow was known for having ‘the perfect physique’ and for being one of the foremost proponents of physical culture. Physical culture being broadly understood as the social movement concerned with health and strength that swept across Europe and the United States in the late 19th and early 20th century.[2]

A man built to a Grecian ideal of beauty and presented as the ideal of what good health should be, Sandow toured the world performing and lecturing the masses about the importance of physical and spiritual health.

Such was Sandow’s mass appeal in the late 19th and early 20th century, that some commentators have credited him with launching the body obsessive societies of today.[3] His influence stretched from America to Australia and many places in between. Much has been written about Sandow’s time in Great Britain and the United States, but few have examined Sandow’s time in the south of Ireland in the late 1890s.

On May 6th 1898, Eugen Sandow and his tour company opened their first show in Ireland for over five years. Sandow had toured Ireland in 1893 but had only been met with moderate support from pockets of Irish fans. Indeed, the Irish press barely took notice of his visit.

When Sandow returned in 1898 he was treated like the celebrity he had become. Reports from the Irish Times suggested that the opening night of Sandow’s performance saw over 1,300 fans cram into the Empire Palace Theatre to see the “perfect embodiment of human form” in the flesh.[4]

In 1893 Sandow had visited Ireland with little fanfare but by 1898 he was a major draw.

They weren’t to be disappointed. First in the running order came a preliminary posing routine from the Prussian strongman. Stood atop a revolving platform, Sandow went through a variety of poses designed to display the splender of his physique.[5] Some lucky members of the audience were even permitted to touch Sandow’s well-sculpted muscles.

Sandow was more than a body however, as David Chapman eloquently argued in his biography of him.[6] The Prussian was part model and part showman. If one is to believe the newspaper reports of the performance, Sandow’s showmanship in Ireland was nothing short of extraordinary.

Descending from the revolving platform, Sandow began a balancing act involving two 56 pound dumbells and a willing volunteer. Hoisting up the two dumbells in one hand, Sandow then preceeded to lift a member of the audience aloft in the other. Sandow followed this trick by lifting two 96 pound dumbells aloft in one hand before pressing a 300 pound dumbell overhead. This was only the beginning of his routine.

The audience’s attention had well and truly been captured at this stage. Next Sandow

“lifted enormously heavy weights, which he raised above his head, stretching out the arm in which he held them to its full length; getting on the back of a horse, he leant back over the crupper and lifted enormous weights from the level of the stage and brought them up until he sat upright with them on horseback.”[7]

Soon after Sandow was reported to have thrown willing members of the audience around the stage like bags of flour followed by novelty tricks such as tearing through 162 playing cards with ease. Sandow was given a brief remission whilst a pianist arrived on stage to entertain the audience.

According to the Freeman’s Journal, once rested Sandow rose purposefully, disdainfully gazed at the pianist and proceeded to raise both overhead a platform supporting both a piano and a pianist. Sandow then stood calmly with the platform overhead whilst the pianist played a quick cavatina.[8]

Once the curtains drew down to rapturous applause, Sandow went backstage where his night’s work continued. Backstage Irish doctors, professors and gentlemen eagerly awaited a lecture from Sandow regarding his health regimen. Speaking in a slightly foreign accent, Sandow lectured his small audience on the virtues of physical health and well-being. Importantly, he also revealed the means to obtain them.

His show included lifting a piano and a pianist above his head.

Once the lecture was finished, Sandow patiently waited as Irish physicians prodded and probed at his muscular physique in a quest to gain a fuller understanding of his vitality. Few were surprised when the verdict of such investigations was that Sandow was “sound as a bell.”[9] Sandow and his tour company performed for just one week at the Empire Palace Theatre but the effects of his visit were to be long lasting. 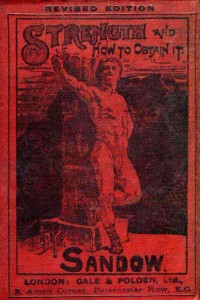 During and soon after Sandow’s visit, numerous articles began to emerge in Irish newspapers about the importance of health and physical culture. Clubs, similar to the modern day gymnasium, began to spring up around the Ireland within a decade of Sandow’s show.[10] In the years after his visit, Sandow’s influence remained constant in Ireland.

His book ‘Strength and How to Obtain it’ and magazine, ‘Physical Culture’ debuted just before his appearance in Dublin on Irish shelves and proved itself to be a hit. Browne and Nolan, the Irish booksellers based in Nassau Street, Dublin, even advertised Sandow’s tome ‘Strength and How to Obtain it’ alongside St. John’s Gospel.[11] Sadly no records exist as to which publication sold more.

Irish newspapers began to carry foreign editorials about Sandow’s latest health advice accompanied beside advertisements for Sandow endorsed foods and equipment. References to the Sandow Developer, a crude system of pulleys and dumbbells, turned up in newspaper reports, Irish Army Brochures, and even James Joyce’s Ulysses.[12]

A number of Sandow biographers have postulated that Joyce may have even attended Sandow’s performance in 1898.[13] Certainly the ‘Ithaca’ episode in Ulysses, which discusses the Sandow system in great detail, suggests that Joyce was highly familiar with the Sandow phenomena.

Joyce wasn’t the only famous literary figure in Ireland to become fascinated by the Prussian. In 1905, tempermental Irish laureate, W.B. Yeats wrote to a friend that he had included Sandow exercises “twice daily.”[14] Such was Sandow’s influence that famed pacifist Francis Sheehy Skeffington had the Sandow workout manual amongst his possessions.[15]

Sandow was  symbol of the growing cult of physical fitness.

Sandow’s real influence came amongst the Irish masses who readily accepted his advice. In 1899 a Mr. Hornbrick from Cork was awarded a medal by Sandow for his progress whilst using the ‘Sandow system’. The suggestion from the press was that Hornbrick was one of many who used Sandow’s methods.[16] In 1906, Sandow announced in the Irish Times that henceforth he had established a consolatory office in Dawson Street for Irish strength enthusiasts hoping to get advice from the ‘modern day Hercules’, thereby continuing his presence in Ireland.[17]

The advent of physical culture in Ireland from the late 1890s onwards was no different to similar trends in the US, UK and mainland Europe. What can be learned from Sandow’s success is that Irish men and women at the turn of the 20th century were as concerned about health, strength and well being as their counterparts elsewhere.