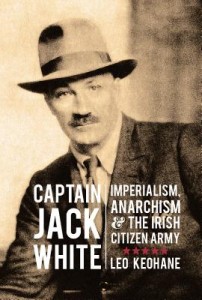 When An Post issued a commemorative stamp of Jack White, first commandant of the Irish Citizen Army (ICA) on January 2014, historians were quick to point out that whoever the man on the stamp was, it was not White. That White could not even be assured of getting at least a stamp to himself makes Leo Keohane’s biography an overdue one.

Perhaps White had too diverse a career – first in the British army, then the Irish Citizen Army, followed by the Irish Volunteers, and then back in British military service as an ambulance driver – for Irish history to conveniently sum up. Better, then, to pass him over entirely. There was something of a ‘Peter Pan’ quality to him, the boy who never quite grew up and settled down with one label like the rest of his contemporaries. It was a trait White himself was aware of, as the aptly chosen title of his memoir, Misfit, indicates. Whatever else may be said about the man, he was not devoid of self-awareness.

White had a diverse  career – first in the British army, then the Irish Citizen Army, followed by the Irish Volunteers, and then back in British military service as an ambulance driver.

The subtitle of Keohane’s biography sets White firmly in the context of the ICA, which is what he has been remembered for even though his time in it was a brief one. The son of a celebrated field marshal, White made for an unlikely revolutionary but from his time in the British army and onwards, he was a man determined not to make his time in any sort of system an easy one.

As a case in point, White refused to execute a teenage prisoner during the Boer War, threatening instead to shoot his commanding officer. Such insubordination did not stop him from later receiving the Distinguished Service Order for bravery, just as the award and a promising military career did not stop him from resigning his commission and striking out on his own.

White had by then immersed himself in the writings of Tolstoy and for the next few years sought to immerse himself in Tolsyoyan principles. Although White never did articulate quite what these principles were, this search for some sort of higher truth would drive him for much of his life. He was someone who was “desperately seeking some personal form of fulfilment,” as Keohane puts it, “with an awareness of himself that insists he must have a role to play in the grand scheme of things.”

White was revolted by his experience of the Boer War and sought solace in the pacifist writings of Tolstoy.

Such a role was found upon his return to Ireland in 1912. Ireland was by then thick with tension: between Ireland and the rest of the Empire, between Nationalists and Unionists, between workers and their employers. The last conflict came to a boil in the Lockout of 1913, and it was its brutal suppression by the Dublin Metropolitan Police, coupled with the plight of the Dublin poor, that drove White to the twin causes of social justice and the ICA.

It is unclear as to who initiated the idea of the ICA. Keohane cites a number of sources that attribute this to either White or James Connolly. Both were certainly involved in the ICA from its earliest stage, and Keohane skilfully draws character portraits of what attracted either man to such a body. For White, the ICA was a chance to apply his military experience to a worthy cause without compromising his pacifism, given the self-defence role he envisioned for the ICA.

White envisioned the Citizen Army as a purely defensive force for strikers during the 1913 Lockout.Connolly made it into an insurgent militia.

Connolly, in contrast, was prepared to use the ICA more assertively such as when he dispatched a squad with rifles and bayonets to a striking picket line. White, Keohane believes, “would have been aghast at the time if he had foreseen some of the uses that Connolly had in mind for the Citizen Army,” and it is certainly hard to imagine White leading the ICA into open rebellion against the state as it would do on the Easter Week of 1916.

But White’s leadership in the ICA did not last long. Frustrated by the increasingly low turnout of ICA members for events, White defected to the Irish Volunteers “with the suggestion of the tone of an ambitious young man, leaving a small and backward family firm for a large and exciting national company,” as Keohane observes.

White organised and commanded a brigade of 5,000 men in County Derry. Despite many of them being former soldiers like himself, he did not find their discipline to be much better than that of his former ICA charges. In addition, he found his authority increasingly undermined by the sectarian suspicions of those in the Derry Volunteers who doubted that a Protestant like White would ever lead them into a fight against Orangemen. As of before, White found that the reality of the organisation he was responsible for did not match the ideals he nurtured.

After a few months White left the ICA for Irish Volunteers, but joined the British ambulance service when the Great War broke out.

The outbreak of the Great War in 1914 gave White the chance, or so thought, to solve the problem of discipline for the Irish Volunteers. A circular letter he wrote to various leading figures proposed the formation of a sort of Irish auxiliary force for the British war effort: the Irish Volunteers would be paid and equipped by the British state but with their leadership remaining within themselves. White went as far as to write to Lord Kitchener with his idea, although to no avail. Intriguingly, another leading figure in the British military, General Ian Hamilton, was sufficiently taken with the notion to take it up to Prime Minister Asquith but likewise received short shrift there.

The idea had not been a million miles away from John Redmond’s call for Irishmen to enlist. White’s version, however, was unlikely to entice many in the British government who would have been providing the resources to an armed body that they would have had little control over. On the other end of the political spectrum, it would have had little attraction to Nationalists who wanted Ireland to have nothing to do with the war. While doomed to ignominious failure, the idea did show White’s willingness to attempt an inclusive solution to a problem rather than remain fixed to a party line.

In keeping with his nature as an eternal renegade, White left the Irish Volunteers shortly after the War began in order to do his part on the Continent. Marrying his pacifist principles with his personal courage, he took up ambulance duties at the battle front. His distance from Ireland meant he was to have no input in the Easter Rising. That did not stop him from attempting to rouse the miners of South Wales into a strike in a futile effort to save James Connolly from execution. The reaction of the miners to this demagogue in their midst was not recorded.

In 1916 White tried to lead the south Wales miners out on strike to prevent the execution of James Connolly.

After all that, the rest of White’s life seems almost like an anticlimax. He assisted with the Sinn Féin election campaign in 1918 while finding the time to publish a pamphlet that attempted to explain the Sinn Féin phenomenon and the future of Ireland in socialist terms. That set the tone for the rest of his life: the man who had tried moulding the fate of Ireland through the ICA and then the Irish Volunteers was content for the most part to sit on the sidelines and provide only commentary.

Exceptions to this passivity included his arrest in Belfast in 1931 while on a ‘hunger march’ with a group dedicated to the unemployed. Seemingly singled out from the crowd by the Orange police, White received a beating and a month in prison. Three years later, he was attacked by IRA men while leading a branch of the left-leaning Republican Congress, to Bodenstown for the Wolfe Tone commemoration. Almost as if not to leave anyone out, he was assaulted again at Bodenstown two years later, in 1936, and badly bludgeoned, this time by Blueshirts.

White skirted around left-wing and republican politics in the 1920s and 30s, joining the Republican Congress and volunteering to fight for the Spanish Republic in the Spanish Civil War.

White went to Spain shortly after its Civil War began in 1936, though his actions there are uncertain, and Keohane finds a second-hand account of him as a Spanish Republican training officer “doubtful”. His death in 1946 received scant attention outside his friends and family.

Keohane tells the tale of a complex man who lived in complicated times, and tells it well. It is first and foremost a biography. The great events in Irish history at that time pass on by like so many road signs, leaving readers with only Jack White as he made his way through life as their only companion. Many other people of prominence appear through the pages, from James Larkin and Roger Casement to Lord Kitchener and Edward VII, but this is Jack White’s story, not theirs, and they are dropped from the narrative as soon as they part ways with our hero.

How much readers will remain invested in this book will depend on whether they want to continue reading about Jack White. He was not one of the most important people for his era but he was one of the more interesting, one of the more cerebral, and perhaps one of the most frustrating for he never achieved a fraction of what he perhaps could have had. For all that, he deserves to be better known, and if anything will grant him this, it is this book. And who knows? Maybe Jack White will have the right stamp for himself, after all.