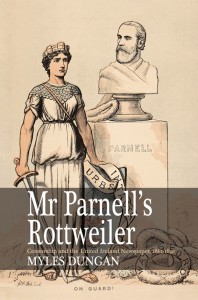 In the words of its editor, William O’Brien, United Ireland which was founded by the leader of the Irish Parliamentary Party, Charles Stewart Parnell in 1881 to support the work of the Land League, constituted nothing less than a ‘weekly insurrection in print’.

This is a book about the United Ireland newspaper of the Irish Parliamentary Party of the 1880s, which was described as a ‘weekly insurrection in print’.

Mr Parnell’s Rottweiler recounts how the newspaper, which harried prominent government figures and remained in circulation until 1896, helped the Irish leader to instigate what Frank Callinan has called a ‘soft left’ within the League (later the National League) by inciting government fears of violence, thus prompting it to introduce ameliorative legislation while simultaneously deferring to the authority of the Irish leader and the primacy of parliamentary methods (p.27).  The book comprises an abridged version of the author’s PhD thesis, in the process both building upon and helping to inform the historiography of Irish journalism.

In parts, Dungan contributes to the respective assessments of Chris Morash and Felix Larkin that William O’Brien was a pioneer of investigative journalism (and Dungan certainly brings O’Brien into focus as a brilliant, yet restless young reporter) but that is not his central theme.

Instead, he uses United Ireland as a case study to explore wider issues such as the concept of press freedom in the context of the liberal British state, the extent to which newspapers were able to sustain and ultimately destroy Parnell’s career and the question as to whether or not the columns of United Ireland could really be described as representative of an emerging tabloid journalism.

The danger posed by violently radical newspapers across the United Kingdom was one shared by Liberal and Conservative governments alike and what is fresh about Dungan’s approach is that he resists the tendency, so often encountered in academia, to interpret the history of this period in dualistic terms – in other words the notion that the political left necessarily adopted an indulgent attitude while the right was more rigid and unyielding.

Thus, although William Ewart Gladstone who led four Liberal governments remarked that press freedom was a ‘safety valve of passions’, he also presided over a coercive act in 1870 that contained special clauses against sedition and permitted the seizure of printing presses (p.57).

Successive British governments considered whether or not to suppress the paper for its encouragement of violent agitation during the Land War.

Britain prided itself on its rule of law, liberty of movement and freedom of speech and in attempting to suppress radical publications, the Victorian state faced a serious dilemma.  At the same time however, Dungan reminds us that far from being a cherished ideal, freedom of the press was only ever a hazy principal and that Britain, unlike the United States, did not possess a First Amendment’.

The real dilemma faced by the British state, according to Dungan, was neither politically nor socially motivated.  Instead, it stemmed from an increasingly outmoded Smithian liberalism which favoured the economic principle of ‘laissez faire’ and the primacy of the market.  Thus, when orders were made to seize copies of United Ireland in response to its editorial invective, compensation was a significant issue and although the authorities at Dublin Castle were able to rely on the principal of sub judice, they faced a deluge of claims from newsagents which was not an easy issue to overcome (p.91).

Dungan’s book really gets into its stride here, both in his description of William O’Brien’s attempts to maintain circulation of the newspaper amid the constant threat of seizure and in his account of vendors seeking compensation.  When production of the newspaper shifted to Liverpool, many stratagems were devised to smuggle copies into Ireland in crates marked up as ‘dried fish’,  ‘woollen goods’ or even made up like loaves of sugar (p.87).

the paper was printed in Liverpool and sometimes had to be smuggled into Ireland.

If the late nineteenth century could be described as a period of increasing journalistic objectively and professionalism, United Ireland certainly bucked that trend.  Likewise it did not easily sit within the stable of ‘New Journalism’ which was characterised by salacious gossip (and hopefully higher sales) at the expense of informed political commentary which was apparently of lesser interest to readers.

Parnell’s newspaper challenges the assertion made by Jürgen Habermas that the emergence of a mass circulation press was achieved at the expense of a depoliticised content (p.332).  United Ireland continued to do both and do it well.

For the most part, United Ireland was a newspaper of its time.  The newspaper’sstubborn and unrestrained political commentary does not smack entirely of atavism and its unfettered editorial policy echoed the tone of British radical publications such as Reynold’s Newspaper.  Ultimately, it was this liberal ethos that proved to be Parnell’s undoing.

When the Irish Parliamentary Party broke apart in the wake of the Katharine O’Shea divorce scandal, the previous editor of United Ireland formed a rival anti-Parnellite newspaper, the Insuppressible and in analysing the raft of correspondence that passed between him and William O’Brien, Dungan expands considerably upon the work of Marie Louise Legg.

Overall, Mr Parnell’s Rottweiler displays a thorough knowledge of late nineteenth-century legal issues and Dungan’s knowledge of Irish Parliamentary Party politics is underscored by a sure-footed narrative style.  Informed readers may note that the author remains silent about the seizure of copies of the Insuppressible by gunpoint or the bombing of the anti-Parnellite National Press offices in 1891 but that is understandable.

Mr Parnell’s Rottweiler displays a thorough knowledge of late nineteenth-century legal issues and is underscored by a sure-footed narrative style.

Fenian violence, which often provided sensational fodder for newspaper columns, may certainly have helped to fuel the development of tabloid journalism but its absence here seems less of a glaring omission and more of a conscious decision by the author.  What has been left out for the sake of a more refined narrative may yet become the basis for further research.

Dungan occasionally refers to drawings that appeared in the pages of United Ireland and in several places, the book might have benefited from illustrations.   This is only a minor point however and overall, Mr Parnell’s Rottweiler is a worthwhile read.  It casts a magnifying glass, not just on the development of United Ireland but on a heretofore overlooked aspect of Irish journalistic history.

Dr Barry Kennerk (PhD) works at Temple Street Children’s University Hospital where he is resident historian and archivist.   An accredited genealogist, he is the author of three previous books, the most recent of which (Moore Street: The Story of Dublin’s Market District) was a Christmas bestseller in 2012. He regularly presents papers at conferences and his research has been published in a number of high-impact publications including Oxford Journal’s Social History of Medicine and the Journal of Medical Biography.  His forthcoming book, The Liberal State and its Response to Irish Nationalism during the 1890s is due for publication in 2015.