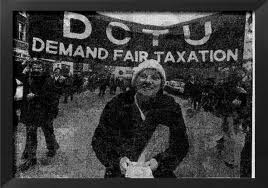 Conor McCabe Interview (listen by clicking on the link)

The interview covers a lot of the same points that McCabe made in his book The Sins of the Father.  McCabe points out that after the Anglo – Irish Treaty that created the Irish Free State in 1922, nothing really changed in the economic relationship between the UK and Ireland. Banking and currency policy was completely abdicated to the private banks and the decision to peg the punt to sterling at 1:1 made credit very expensive in Ireland preventing expansion of Irish industry. Irish banks’ headquarters remained in London for many years and it was not until the 1940s that an Irish Central Bank was created.

Ireland, McCabe argues, had a nation state but a regional economy based on serving Britain’s needs

The economy was geared towards the export of live cattle. This was beneficial to the large ranchers and graziers but put almost all the risk on the shoulders of the small farmers who reared calves up to the age of one year old and they were then forced to sell them at low prices. If the cattle had been slaughtered in Ireland, it would have led to jobs being created in meat processing and tanneries etc. Instead Irish people had to emigrate to Britain to work in factories where Irish cattle were being processed.

Ireland, McCabe argues, had a nation state but a regional economy based on serving Britain’s needs. It lacked the ability to generate revenue that could be taxed and reinvested in things like universal education, healthcare and infrastructure. Had Ireland remained in the UK, some of this might have been made up with tax transfers from “the mainland”. But the price of independence was that this was no longer forthcoming.

McCabe  challenges some of the orthodoxies regarding economic history for example, the idea that the Fianna Fail government of the 1930s imposed a disastrous economic nationalism on the country. Rather, McCabe argues their limited schemes of setting up semi-state industries for the home market, house building and job creation were too conservative as the Irish market was too small. He also demurs from the commonly accepted narrative that that TK Whitaker and Seán Lemass in the 1950s transformed the Irish economy and that entering the EU (or EEC as it then was) was an unqualified success and that no one could predict the current European economic crisis.

The 1950s saw the contradictions of the Irish economy exposed almost to breaking point. Though Ireland had the highest birth rate in Europe, the population of the newly declared republic was threatening to sink below 2 million due to the huge levels of emigration. The economy, based on cattle exporting and protectionist industry for the internal market was simply failing to create enough jobs. Lemass and Whitaker managed to turn this around by lower trade barriers and inviting in foreign companies to set up a base for export production in Ireland – a strategy that remain a key part of Irish economic policy. This is turn allowed for belated investment in education and infrastructure.

The downsides were several however. First, Ireland continued to shed jobs until the late 1960s. McCabe tells us it was the character of the jobs that were changing. In other words, agricultural labourers were still leaving the country but the middle classes could now avail of more white collar jobs. Secondly, the failure to create an indigenous industrial base left Irish governments with little enough real economic autonomy. The result has been that, especially at times of crisis, the burden of tax has been borne disproportionately by wage earners and not by business.

Of Europe, he argues that just as the Irish state could not be successful without its own currency, so the euro cannot work unless a true European state is created.

There’s also discussion about the Irish Financial Services Centre (later ‘International Financial Services Centre) and it’s role in the Irish economy. In the 1990s Ireland became heavily dependent on attracting financial capital to set up in Dublin’s financial district, based in the disused dockland area. The unregulated banking activity there has been accused of doing much to create the current banking crisis. But McCabe also argues that it was allowed to substitute for a real economic base, arguing that finance employed few people outside of greater Dublin.

McCabe ties the issue of the Troubles into the problems with Irish historiography and the debates about revisionism. In public debates leading up to the Nice and Lisbon treaties there was a palpable anger in some circles that anyone would dare criticise the EU and those who did question the economic and political direction that the EU was going towards  were caricatured as xenophobic ultra nationalists who wanted a return to a de Valera, comely maidens Ireland of the 1950s.

At the minimum, McCabe’s take on modern Irish economic history is a new, unorthodox one that opens up new debates and deserves consideration. His blog Dublin Opinion is here.