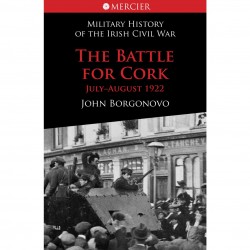 The Battle for Cork, July-August 1922

On August 8 1922, 450 Free State soldiers clambered out of a converted passenger ferry at Passage West, near Cork city.

Two days of quite bloody fighting later, in the hills south of Cork city, and the Republican fighters were streaming out of the city in disarray, leaving dense clouds of black smoke from burning buildings behind them.

The capital of the ‘MunsterRepublic’ in which Liam Lynch sought to organise opposition to the Treaty settlement, was in government hands. This account of these events is the best book in Mercier’s Military History of the Irish Civil War series so far.

Many new books have come out lately on the conflict, but too many amount to a dreary catalogue of incidents and casualties culled from the day’s newspapers, with little attempt at either fitting the fighting into its social context or at political and military analysis. Too often also, the narrative ends up in tired old platitudes that explain very little, to the effect of ‘how tragic it all was’.

Well researched and well written, this is the best book of this series so far.

I am pleased to be able to say that John Borgonovo’s slim new book, an account of events in Cork from the signing of the Treaty until theFree State troops’ seaborne taking of the city, does not fall into any of these traps.  Scrupulously well researched, clear and well-written, this book manages to be both a good read and tell us much that is new about the civil war in Cork.

Much more was going on in the southern city in the early months of 1922 than merely a predictable slide into civil war between supporters and opponents of the Treaty. Borgonovo shows that the IRA hardliners there very nearly provoked a restarting of war with the British by seizing the arms from the warship the ‘Upnor’ (‘a hanging matter’ its captain apparently told them) and kidnapping and killing four British Intelligence officers in April.

The latter led to a western-style standoff at Macroom between a heavily armed convoy under Bernard Montgomery (of el Alamein fame) and IRA men on the surrounding rooftops.

An uglier side to IRA activity in the run-up to civil war was a series of shootings of local Protestants in late April. Much ink has been spilt over this incident but Borgonovo cautiously proposes that the shootings had more to with eliminating the IRA’s perceived enemies than with straightforward religious rancour.

At the same time, he places the events in the context of the severe sectarian violence in Belfast that spring. It seems that Catholic refugees from that city publicly appealed to the Cork IRA to evict Protestants and use their houses as new homes for them. Commanders such as Sean Hegarty resisted such calls but they do show how vulnerable was the position of Protestants and ex-unionists after the British withdrawal.

Despite its reputation as the ‘rebel city’, public opinion in Cork was not predominantly republican

But for all its reputation as the ‘rebel city’, this book shows that public opinion in Cork was far from being wholly, or even mostly, Republican. The largest social movement was a series of strikes and ‘soviets’ (the name was fashionable at the time) by the city’s trade unions in the spring.

The largest political rally, which the IRA did its best to disrupt, was Michael Collins’ pro-Treaty pre-election meeting, which attracted over 50,000. The Catholic Church and most of its clergy remained hostile to the ‘irregulars’ throughout. And in the June elections, it was the Labour Party candidate, Bill Day, that topped the poll in Cork, followed by the pro-Treaty men, Walsh and De Roiste.

However, this book is no re-working of the civil war as ‘democracy versus republican militarism’ narrative. Borgonovo shows that the Cork IRA leaders had little stomach for fighting against fellow nationalists – Liam Lynch pursued compromise until the end and many prominent Cork IRA figures, such as Florrie O’Donoghue, opted out of the civil war altogether.

While they did censor a largely hostile press, Borgonovo makes the under-appreciated point that while in control of the city, the anti-Treaty IRA made no attempt to persecute Free State supporters in any way. Ford’s car factory in the city could not even be persuaded to plate armoured cars for the IRA and there seems to have been no effort made to coerce them to do so.

One wonders also, if the representation of the Civil War as a kind of class conflict, an idea championed afterwards by Peadar O’Donnell and other left-Republicans, is really so far fetched after reading that the plebian IRA leadership in Cork were considered by the pro-Treaty Sinn Fein politicians to have ‘risen above their station’ and that the (entirely pro-Treaty) employers of Cork formed their own private police force to keep order in the city for two months after its seizure by Free State forces.

The civil war was brought to the Cork IRA by events elsewhere, principally in Dublin, where Michael Collins, under British pressure, moved against the most hardline Republican faction of all in the Four Courts, prompting the outbreak of hostilities around the country.

Another staple of Irish civil war writing has been to stress the utter incompetence of the Republican war effort. While there is much to this, Borgonovo unveils a Republican administration in Cork city, in the month or so of war before the Free State landing, that deployed troops to different fronts, collected customs and taxes effectively and even organised mobile kitchens for returning fighters. It amounts to quite a different picture from the usual portrayal of chaos and muddle.

However, in the end, the fact is that Emmet Dalton’s National Army expedition managed to dislodge the anti-Treatyites from their ‘capital’ with relative ease and bring to an end the war’s conventional phase. Borgonovo has a clear-sighted analysis of why this was so – the Free State army, built around a hardcore of IRA volunteers, successfully made the transition from a guerrilla to a conventional force and the anti-Treaty IRA did not.

This meant that the National Army had a clear command structure and hierarchy, so that operations could be planned and executed in a coordinated manner. The IRA by contrast, continued to band small numbers of its best fighters into ‘flying columns’ and to leave the rest up to local initiative.

It mattered also, of course that the anti-Treatyites were haphazardly armed and supplied, whereas the British-backed Free State forces had ample arms (including artillery and armour) and ammunition.

The actual fighting at Douglas and Rochestown, after the landing seems to have been fierce enough – a fact that, again, previous accounts stressing the ease of the Free State victory, have tended to elide. Eyewitnesses in this book talk about lorry-loads of casualties being ferried away from the firing line. Perhaps as many as 30 were killed and many more wounded before the Republicans, outnumbered, outgunned and outflanked made their ignominious retreat from the city.

There is, as John Borgonovo remarks towards the end of the book, more to say on the civil war in Cork. He writes that the guerrilla campaign there was more intense than that against the British. It would interesting to see Borgonovo, after his previous work on the War of Independence and now the Civil War’s conventional phase, look at this next.

You can listen to John Borgonovo talking about this book here.

7 Responses to "Book Review: The Battle for Cork, July-August 1922"