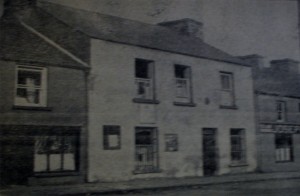 In this article, Liam O Duibhir, author of The Donegal Awakening, gives an account of the first ever daylight arms raid of the War of Independence which was carried out by the men of the North East Donegal brigade in their neighbouring county of Tyrone.

The first ever attack by Irish insurgents on the British establishment in Ireland in Irish War for Independence came just after the general election of December 1918 when the Sinn Fein party won seventy-three seats. The inaugural meeting of Dáil Éireann followed on 21 January 1919 and coincidently on the same day the first episode of physical force by the Irish Volunteers occurred at Soloheadbeg county Tipperary.

In that incident two RIC constables were escorting a cart of explosives to a nearby quarry when they were ambushed and killed. At the time it was disputed whether or not the ambush was sanctioned by the General Headquarters of the Irish Volunteers. The action by the 3rd Tipperary brigade was frowned upon by many within the Sinn Fein organisation, but was viewed by some within the higher echelons of the Irish Volunteers as the start of a campaign that had been several years in the planning.

Thursday 26 August 2010 marks the 90th anniversary of one daring exploit of the Donegal Volunteers in what was possibly the first daylight arms raid ever to be carried out in the country. However, the location of this raid for arms was in neighbouring county Tyrone. 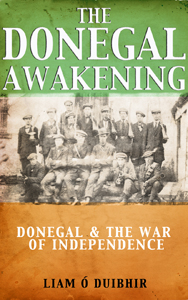 In mid-August 1920 Sam O’Flaherty of Castlefinn, who at that time was officer commanding the No. 2 brigade covering north-east Donegal, received information from a friendly RIC constable named Johnston that the RIC barracks in Drumquin, county Tyrone would be an easy target for an arms raid as most of the personnel were heavy drinkers. He informed O’Flaherty that the barracks was manned by two sergeants and eight constables and they spent much of their time drinking in the local bars.

Sam O’Flaherty immediately summoned the brigade staff and officers to Castlefinn with a view to planning and carrying out an arms raid on the Drumquin RIC barracks. At this meeting Dr. J.P. McGinley, a doctor from Letterkenny who was responsible for forming Volunteer companies from 1917 onwards, suggested that the raid should be carried out during daylight hours as the Donegal Volunteers were unfamiliar with the area and there would be less confusion amongst the raiding party. After some discussion it was agreed that the raid would be carried out in daylight hours and the date was set for Thursday 26 August, which was the local Fair Day in Drumquin. This would give the Volunteers sufficient cover as there would be large crowds in the town and strangers would not be as easily noticed.

The raiding party was made up of officers and Volunteers from Ballybofey, Killygordon, Castlefinn, Clady and Letterkenny. The plan was set in motion on Wednesday 25 August with the commandeering of four cars from Letterkenny and the surrounding area. John McGroarty from Killygordon used his own car making a total of five cars and all cars were then fitted with Monaghan number plates.

On the morning of the raid the Letterkenny Volunteers set off towards Ballybofey picking up men at different locations en route to Drumquin. The five cars carrying a total of twenty-five Volunteers arrived at a prearranged location near Drumquin where they were issued with final instructions. The instructions were that they would move into the town with some working in pairs posing as cattle dealers and their task was to scout the local pubs to locate RIC men. They were to disarm any RIC men they found and take them to a secure location (which was where?) where they were to be held until after the raid. The members of the main attacking party were instructed to work their way to a point beside the barracks and on a given signal they were to rush the barracks.

Hugh McGrath and Anthony Dawson, both from Letterkenny were tasked with cutting the telephone wires while Michael Doherty was tasked with scouting the town for RIC men. The three men proceeded to carry out their tasks. Michael Doherty made his way to the other end of the town (what’s the other end? Where did he start from?), but did not see any RIC.

The Drumquin RIC barracks was a two storey building located on the main street (see image above) and with the large crowds gathered for the Fair Day no one noticed the Volunteers moving into position. Some of the raiding party collected a herd of cattle and drove them in the direction of the barracks while the others waited in the vicinity of the building. Two Volunteers, James Curran from East Tyrone and James McMonagle from Letterkenny were detailed to take up positions at a garden seat located beside the barrack door.

When everyone was in position two other Volunteers were to knock at the barrack door to inquire about a cattle dealer who lived in the area and when the door was opened they would rush in. However, with the commotion caused by the Volunteers driving the herd of cattle and posing as cattle dealers striking a deal, a curious RIC constable opened the front door of the barracks. Sam O’Flaherty gave the signal, which was lowering a newspaper and placing it in his pocket. James McMonagle immediately drew his revolver and called on the constable to raise his hands. The constable initially complied with the order, but in an instant dropped his hands and reached for his revolver. He was in the act of drawing his revolver when James McMonagle fired hitting him in the forehead and he slumped down across the doorway fatally wounded. The Volunteers stepped over him and dashed into the day-room as Dr. McGinley knelt over the constable to administer first-aid.

At that moment James McMonagle noticed another RIC constable standing at the top of the stairs and aiming his rifle at Dr. McGinley. McMonagle fired two shots at the constable and he tumbled down the stairs badly wounded. The Volunteers then rushed up the stairs and found three constables in a room. One of them had attempted to escape through a skylight on the roof, but due to his large size got stuck and was left dangling there. The Volunteers then scoured the building collecting all weapons and ammunition. By this time the cars had been driven to the barracks and the consignment of weapons; twelve revolvers, twelve Lee Enfield rifles and a large quantity of ammunition was loaded.

They had planned to burn the building down but with the commotion and the shooting they feared that reinforcements would soon arrive from Omagh so they left without setting fire to it. As the convoy of cars began driving through the town an RIC constable threw a bomb from an upstairs window and the Volunteers opened fire to prevent him throwing any more.

On the return journey Sam O’Flaherty ordered them to keep their revolvers at the ready and be prepared to use them should they drive into any roadblocks. As they drove along it was discovered that one of the Volunteers was missing having been left behind in Drumquin.

At the other end of the town Michael Doherty heard the shooting at the barracks and suddenly a number of people stampeded in his direction. He produced his revolver and advised them to remain calm. He then heard the explosions from the grenades and thought the plan had gone wrong. On hearing the signal to evacuate the town he began making his way towards the location where the cars had been parked.

En route he met a few cattle dealers that he knew and not wanting to raise suspicions stopped to talk with them. He asked what the commotion was and was told there had been a raid at the RIC barracks. Speaking with the cattle dealers delayed him and by the time he got to the barracks the cars were gone and an RIC sergeant was on the street with a gun in his hand ordering the people to clear the area.

Doherty was now alone and within a short time reinforcements had arrived from Omagh and the town was swarming with military and RIC. He managed to get a lift as far as Fintona and from there took the train to Omagh. On arriving there he found a lot of military activity and he made his way to a garage where his brother worked. He brother took his revolver and put it in a safe place. He then was able to wash and get some food before getting the evening train to Strabane.

The main body of the raiding party made their way back to Donegal without incident with the Letterkenny party having to travel by the main route passing two RIC barracks, one at Castlederg and the other at Castlefinn. As they passed Castlefinn the local RIC were erecting a barricade on the road.

Some of the captured weapons were taken to Letterkenny where Anthony Dawson stored them safely in the heating chamber under the Letterkenny Cathedral and some were stored at Langan’s barn in the Glencar area.

The remainder of the party returned via the Newtownstewart Road, turned left on to a bye-road and made their way to Victoria Bridge near Sion Mills. This route took them to Clady and so avoided passing any RIC barracks. The remainder of the weapons were taken to Killygordon by John McGroarty, Sam O’Flaherty and Henry McGowan.

On arriving at a point near John McGroarty’s home O’Flaherty and McGowan exited the car and made their way to the house through the fields carrying the weapons and ammunition. John McGroarty parked his car in the garage and as the two men were approaching the house McGroarty’s sister came out to tell them that the local RIC sergeant was making his way to the house. The three men hid at the back of the house until the sergeant left.

It transpired that the RIC sergeant was calling to pay McGroarty for the hire of his car on a previous occasion. When John McGroarty went to the local barracks the next day to collect his money the RIC sergeant told him about the raid in Drumquin and that he was told to check all cars in the area. He said to McGroarty that his job was easy as his was the only car in the area and he had seen it at his house when he called the previous afternoon.

In another twist an RIC District Inspector, Paddy Walsh approached Dr. J.P. McGinley at his surgery in Letterkenny a short time after the raid. He told Dr. McGinley that he had the descriptions of some who took part in the raid, but to Dr. McGinley’s surprise Walsh said that he had given alibis for the men as he was working for Michael Collins.

The Donegal Volunteers were involved in other daring raids during this period, but the Drumquin raid goes down in history as the first daylight arms raid.

There was one RIC man killed, Constable Munnelly, and one injured, Sergeant Bradley who later received £500 compensation for his injuries.

3 Responses to "Today In Irish History 26 August, 1920 – Drumquin: The First Daylight Arms Raid In The Irish War Of Independence"