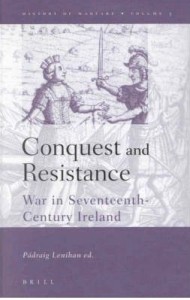 In our second interview with military historian Padraig Lenihan, we talk about the impact of warfare on 17th century Ireland. (Listen to the first interview here)

These hundred years were probably the bloodiest in Irish history with three major wars; The Nine Years War, The Confederate/Cromwellian Wars and the Jacobite/Williamite War. Something in the region f 20-40% of the population was swept away by the Cromwellian Wars of the 1640s and 50s.

Warfare was on a scale never before or since since seen in Ireland. In 1690, 60,000 armed men faced each other across a river fording at the Battle of the Boyne. In 1691, at the Siege of Athlone, the town was bombarded for 10 days at a rate of one round a minute.

The outcome of the wars was equally momentous, all but destroying the old Catholic landed class and installing in their place the “Protestant Ascendancy”. Alongside, this, the old Gaelic language, landholding system and legal system were all displaced by English models.

Societies that can successfully impose their will on others by violence win. They write the history books. It’s their culture that pre-dominates.

“War matters”, Lenihan says. “However much we dislike it, societies and states and nations that can successfully impose their will on others by violence win. They’re the winners, they write the history books. It’s their culture that pre-dominates.”

Our popular memory recalls some aspects of this bloody century and not others. The Battle of Dungan’s Hill (1647), for instance, in which an Irish Confederate Army  was massacred by an English Parliamentarian force, is all but forgotten. The Battle of the Boyne, fought only some 30 km away, in 1690 is still commemorated every year.

Click on the links below to listen to the interviews;

For an excellent collection of articles about Ireland’s participation in the Civil Wars of the 1640s, see the Irish archive of this website.