For the first day of the Rising, see here. 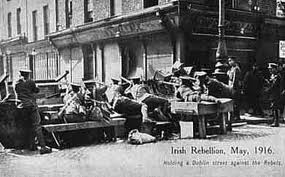 The Irish Times has a summary of events on this day 94 years ago here. I’ve quoted two extracts from these events below which for me are very telling.

The first is about the Volunteers in St Stephen’s Green, who had dug trenches, in some mad attempt to fortify their position one supposes, forgetting it seems that they were overlooked on nearly every side by building, that even if they had not been, they would have been trapped in the green with no supplies or hope of relief!

It for me signifies the sheer military incompetence of the overall plan for the rising. Oh for certain there were events and commanders that showed some among the rebels were savvy and aware of what was required in an urban conflict. Paul O’Brien’s Blood On The Streets

is a great text for those who want to read one example of a well considered position, that at Mount Street Bridge.

At daybreak, the government troops in the Shelbourne Hotel opened fire with a machine gun on the rebels in the Green. The thick vegetation saved them from horrific casualties, but their position was untenable and by noon they had withdrawn to the College of Surgeons. James Stephens noticed that “inside the Green railings four bodies could be seen lying on the ground. They were dead Volunteers. Some distance beyond the Shelbourne I saw another Volunteer stretched out on a seat just within the railings. He was not dead, for, now and again, his hand moved feebly in a gesture for aid; the hand was completely red with blood. His face could not be seen. He was just a limp mass, upon which the rain beat pitilessly, and he was sodden and shapeless, and most miserable to see.”

But the second one is also fairly revealing:

But the mad carnival of the streets and the comedy of mistaken identity could turn deadly at any moment. During the evening, one of Capt Gerrard’s sentries at Beggar’s Bush approached him. “‘I beg you pardon, Sir, I have just shot two girls.’ I said ‘What on earth did you do that for?’ He said ‘I thought they were rebels. I was told they were dressed in all classes of attire.’ At a range of about 200 yards I saw two girls – about twenty – lying dead.”

For me, this is the key story of the 1916 rising, that the innocents suffer. From the first day onwards men, women and children who had no hand act or part in the rising suffered at the hands of the rebels and the British, fate and chance and trigger-happy soldiers in this case, but shells, bombs and heady idealism in others. While there is much to admire in the men behind the proclamation, there is also much to question in the impact of their thought, ideals and actions.

For the next day of the Rising see here. 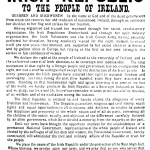